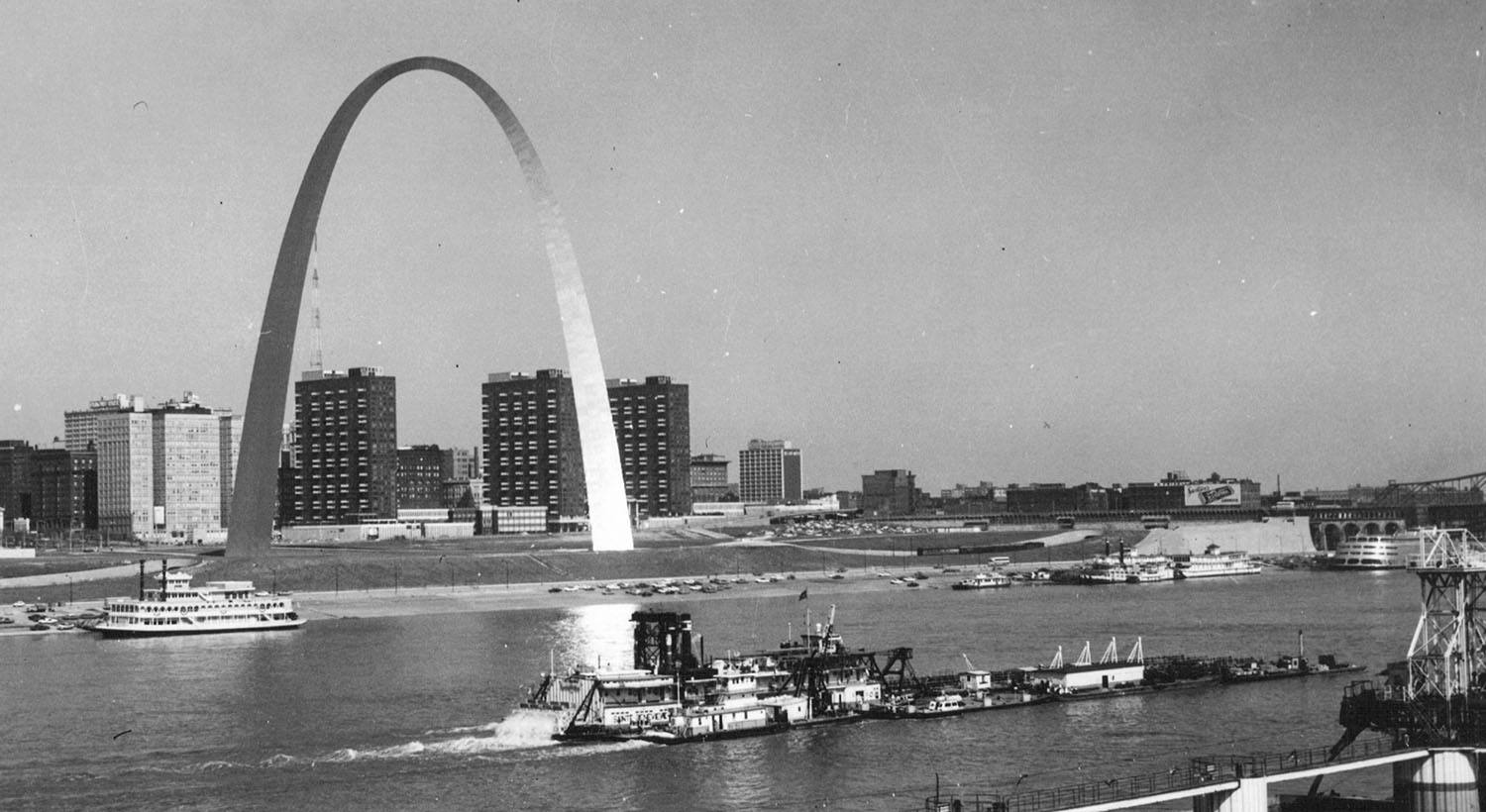 A Half Century Ago On The St. Louis Riverfront

This week, the Old Boat Column steps back five decades to August 1970.

Prominently in the foreground of this aerial view of St. Louis is the sternwheel dredge Sainte Genevieve, constructed in 1932 for the U.S. Army Corps of Engineers at Neville Island, Pa., by Dravo at a cost of $417,217.03. Built on a steel hull measuring 268 feet in length by 48 feet in width, the “Genny,” as it was affectionately known, was powered by two Nordberg condensing engines having 16- and 32-inch cylinders with a 7-foot stroke. Steam was provided by two Babcock & Wilcox boilers. For dredging operations, steam turbines activated electric generators, which operated the main pump motors.

The Genny carried a crew of 58 people, with the day divided into three shifts; eight hours of work and 16 hours off, seven days a week. When dredging, the watch included a mate, five deckhands, one leverman and two pushboat operators. Also on watch were an engineer, striker, oiler, fireman and two sailormen. Two cooks provided hearty meals, assisted by a baker, a dishwasher and two waiters.

The Genny was classed as a cutterhead dredge (as opposed to a dustpan dredge) meaning that two large knives revolved to cut the material on the river bottom, which was then drawn into the suction pipe, through the pump, and discharged through a lengthy pipeline carried on pontoons to the point of discharge.

Capt. Paul Baxter, master of the dredge for many years, often hosted public tours at various river ports. When this writer was a crew member aboard the steamer Delta Queen, we often saw the Sainte Genevieve at work. Capt. Art Zimmer, who served as trip pilot on the DQ, had formerly worked on the Genny and was always eager to see it.

Retired in 1984, the decommissioned dredge was placed on the National Register of Historic Places in 1986. For several years the boat was moored at Davenport, Iowa, where plans to convert it into a river museum never materialized.

Various proposals to utilize the historic vessel for educational purposes included towing it to Cincinnati for the 1992 Tall Stacks Festival, where it would be open for tours, led by the illustrious team of Capt. Harry Louden and river historian Virginia Bennett. At Cairo, Ill., while awaiting the towboat assigned to move the venerable vessel, it sank in 16 feet of water on October 1, spending the next 31 days on the Ohio River bottom. After being raised and emergency repairs made to the hull, the Genny was towed to a drydock at Cape Girardeau, Mo.

Hull work was completed in 1993, but various issues continued to plague the vessel into 1994 when, on March 10, the beleaguered boat sank for the second time. Despite efforts to save the Sainte Genevieve, it was dismantled and scrapped at Paducah, with the engines, capstans and other artifacts preserved for posterity.

Also in view along the levee are, from left, the restaurant boat Lt. Robert E. Lee (built in 1970 on the hull of the Corps of Engineers snagboat Charles H. West); the wharfboat for the absent Streckfus excursion boat Huck Finn; the restaurant-museum sternwheeler Becky Thatcher (formerly the Corps steamer Mississippi III); the small excursion boat Mississippi Belle (alongside the Becky); and the historic Goldenrod Showboat, built in 1909 and a landmark at St. Louis from 1937 until 1990. Last, below the Eads Bridge, is the famous excursion steamer Admiral, operated by Streckfus Steamers from 1940 until 1979. All six of the riverboats are no longer extant.

Caption for photo: A panoramic scene of the St. Louis harbor in August 1970. (Keith Norrington collection)