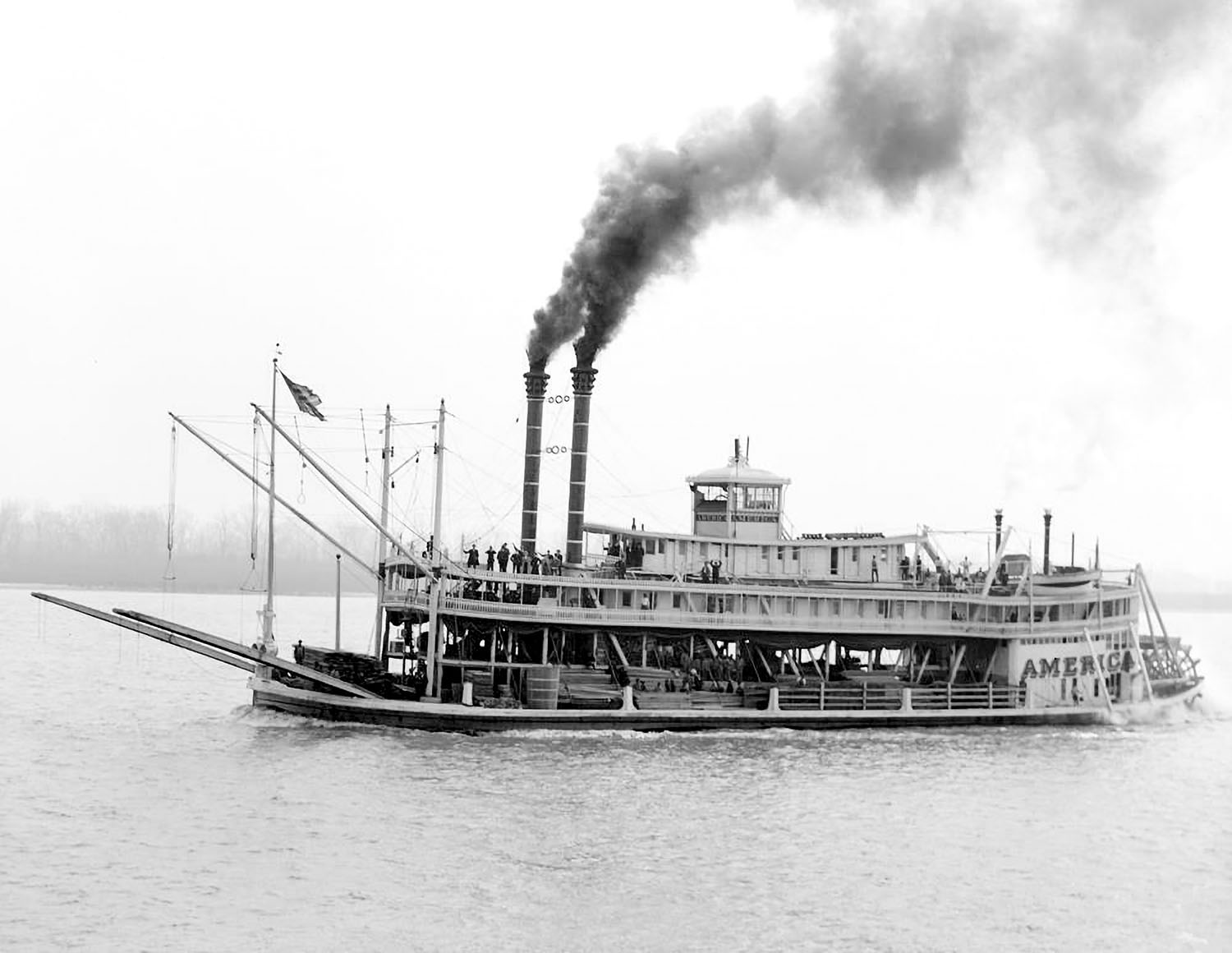 One of the best known and most revered steamboats of all time was the cotton packet America, owned and operated by Capt. LeVerrier (“L.V.”) Cooley.

A trim steamboat with beautiful hull lines and measuring 200 feet in length by 38 feet in width, the handsome sternwheeler was built at a cost of $30,000 by the Howard Shipyard at Jeffersonville, Ind., and launched on October 12, 1898. The engines contained 18-inch cylinders with an 8-foot stroke. Three boilers supplied the steam.

As evidenced by this week’s images, the riverboat was designed with wide cotton guards for the Ouachita River trade from Monroe to New Orleans; the boat began running from New Orleans to Vicksburg and Greenville in 1904. As far as is known, the steamer journeyed to the Upper Mississippi River only once during its career. A trip was made to East Alton, Ill., in 1923 to take aboard a cargo of smokeless powder. On the downbound trip, a stop was made at St. Louis to take on four carloads of soap, several automobiles and a camping outfit for delivery to the South. It is also reported that Anheuser-Busch loaded aboard a number of cases of Bevo, or ‘Near Beer,’ owing to the fact that the nation was in the midst of Prohibition during the period of 1920 until 1933.

A motion picture company chartered the America in January 1924 for the making of a movie titled “Magnolia,” at which time the steamboat’s name was temporarily changed to Winfield Scott. In April of the same year the boat made a trip to Monroe after an absence of 20 years.

Nine decades ago, on August 13, 1926, while laid up at the foot of Broadway in New Orleans, the waves from a closely passing tug struck the old sternwheeler, causing it to founder. In her booklet, Come Aboard the Steamer America, written in 1962 by Esther Cooley (1893-1976), daughter of Capt. L.V. Cooley, it is reported that the water rapidly rushed over the guards, quickly filling the aged and weakened wooden hull. In a matter of minutes, the ornate feathered smokestacks toppled as the boat turned on its side and was claimed by the muddy waters of the Mississippi.

The whistle and roof bell were salvaged from the wreck and placed aboard the steamer Ouachita, a steel-hulled packet built at Nashville in 1922 and originally named George Prince. The whistle was transferred to a railroad ferry at Natchez and finally to an Ohio River boat.

Capt. L.V. Cooley, the beloved master of the America, is credited with reviving Ouachita River trade after a 20-year lapse. Cooley had become a river captain at age 19, stood over 6 feet talland often wore a Panama hat. He suffered a stroke aboard the Ouachita while it was loading cotton on the Ouachita River in late 1931 and was taken off the boat to a hospital at New Orleans. Capt. Cooley died two weeks later, age 76, on December 19, 1931. The big roof bell from the America was placed over his grave in Metairie Cemetery, where it can be seen today.