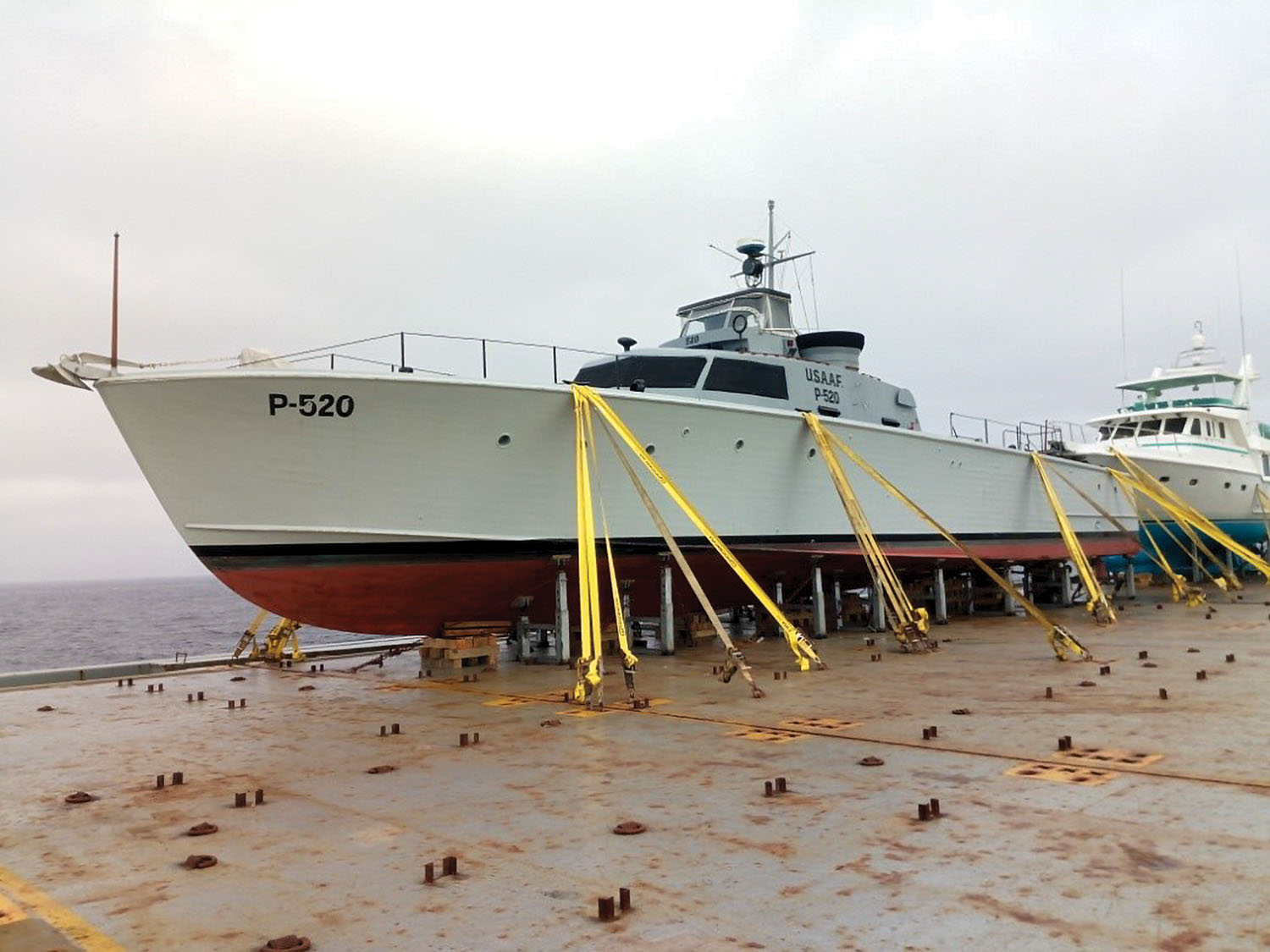 America’s last PT boat, PTF-26, won’t be operating on the Ohio River this fall, but a partnership between the Maritime Pastoral Training Foundation Ltd., which owns it, and a nonprofit group working to establish a naval museum to Louisville, Ky., means another historic ship is taking its place for now.

Friends and fellow Seamen’s Church Institute chaplains Kempton Baldridge, Winston Rice and Tom Rhoades worked for three years to pull together the funds to purchase PTF-26 in March as a training vessel to for future maritime chaplains and youth and also to continue its 20-year mission of equipping and empowering young women for maritime careers. Although located in Morro Bay, Calif., PTF-26 was registered and licensed by the Commonwealth of Kentucky in May. The coronavirus pandemic prevented a yacht carrier the foundation engaged from transshipping PTF-26 from Ensenada, Mexico, through the Panama Canal earlier this year, but a new date was secured for late August.

“PTF-26 sustained an engineering casualty during sea trials off Morro Bay six days before she was due to be lifted onboard the mv. St. Georg for trans-canal delivery to Palm Beach, Fla.,” Baldridge said.

As the pandemic had also prevented fundraisers from being held, the foundation had paid for the nonrefundable shipping cost of close to $90,000 out of pocket.

An inspection had showed PTF-26’s aluminum hull was in good shape, and after completing a list of maintenance and repairs and addressing safety issues, a crew of volunteers had attempted a two-hour shakedown trip August 25 to 5 miles offshore, in advance of making the 305-mile trip to San Diego and down the coast to Ensenada to meet the yacht carrier.

“While inbound, the port throttle linkage was over extended, and we lost propulsion but were able to fix it on the fly,” Capt. Stephen J. Polk wrote in a report to the owners. Then, upon maneuvering back to the dock in Morro Bay, the starboard main engine throttle linkage broke. Additionally, the day before, a diver hired to clear out the wheels, rudders and sea strainers of growth and seaweed reported a 5- by-7-inch section missing out of a propeller blade.

One of those working onboard PTF-26 was Lewis Palmer, president of the Louisville Naval Museum, a group seeking to transport the World War II submarine U.S.S. Ling from where Hurricane Sandy stranded it on the muddy bottom of New Jersey’s Hackensack River to the former Jeffboat Shipyard in Jeffersonville, Ind.

Palmer has worked to acquire other vessels as museum ships, and one of those, P-520, happened to be in Long Beach, Calif. The vessel is a meticulously restored, 85-foot U.S. Army Air Forces Crash Rescue Boat that saw service on the West Coast in World War II.

“By the time Lewis got to Morro Bay, he had done everything needed to make Louisville Naval Museum the new home of P-520,” Baldridge said. “Thus, when it was clear PTF-26 was not ready to travel to Ensenada, Lewis immediately headed to Long Beach and signed the paperwork transferring custody and stewardship of this historic vessel to the Louisville Naval Museum.”

The same crew of volunteers that had planned to move PTF-26 then spent August 26 to September 4 focusing all their efforts to ensure P-520 was ready for sea, ready to clear customs and ready to be loaded as deck cargo on the St. Georg, taking PTF-26’s place.

“It was just classic serendipity that we were able to save about $90,000 worth of pre-paid freight that we had paid for PTF-26 by substituting this boat for her,” Rice said.

An agreement between the Maritime Pastoral Training Foundation and Louisville Naval Museum means the naval museum will pay the foundation back for the cost of shipping so that the funds can be used to repair PTF-26, Rice said.

Meanwhile, since PTF-26 has been delayed, the groups also came to an arrangement where P-520, which is now in good repair, can take on some of PTF-26’s intended missions on a case-by-case basis, perhaps getting to work sooner than PTF-26 would have. That work includes serving as the temporary home of the Maritime Chaplains School, under development by the Maritime Pastoral Training Foundation. The foundation is also helping the Louisville Naval Museum design programming for high-school-age Navy Junior ROTC Cadets, U.S. Naval Sea Cadets and Sea Scouts in the region.

While PTF-26 is the last American PT boat and served in the Vietnam War and Cold War as a U.S. Navy gunboat, P-520 is the last 85-foot Army Air Forces Crash Rescue Boat in its World War II configuration. It served in World War II and was sold as surplus in 1947. The boat was built in 1944 in Wilmington, Calif. It has a wooden hull with fiberglass sheathing.

The father and son team of Bud and Jerry Tretter, both military veterans and shipyard owners, spent more than 10 years restoring P-520 as part of a more than $1 million renovation.
P-520 is 10 feet shorter than PTF-26, so it fits in the allotted deck space on board the St. Georg, the deep-draft yacht carrier. The vessels were also similar enough in size and crew accommodations for the Maritime Pastoral Foundation to use P-520 on certain missions.

The strategic partnership between the Maritime Pastoral Training Foundation and the Louisville Naval Museum “helped transform a huge disappointment into an unqualified triumph,” Baldridge said.
P-520 rendezvoused with the St. Georg, was securely lifted into slings and secured safely aboard and as of the past few days was waiting off Balboa at the western entrance of the Panama Canal for the ship’s turn to transit the canal. It was expected to arrive in Mobile, Ala., for a trip up the Tennessee-Tombigbee Waterway, up the Tennessee River and on to the Ohio River within the next few weeks.

Meanwhile, PTF-26 needs to repair the propeller blade or install a new, 50-inch bronze propeller, replace a 16v71 heat exchanger on its starboard main engine, fix leaky stern tube seals or upgrade to water-jacketed seals, both port and starboard, and replace or install new starting/shutdown systems on port and starboard main engines, along with a list of less urgent repairs, according to an engineering report.

Given the possibility of undiscovered mechanical issues, the Maritime Pastoral Foundation is considering towing PTF-26 to either Long Beach or San Diego, where shipyard facilities can haul the historic vessel out of the water and an accredited marine surveyor can make a thorough examination and make recommendations on repairs and upgrades.

“I am pretty confident that the recommendation of the surveyor is going to be remediation and upgrades within the budget that we’ve talked about, including the relocation expenses,” Rice said.

That means PTF-26 is still expected to find a home on the inland waterways, just not in the next month or two.

Additionally, and partly because of the connection with Palmer and the Louisville Naval Museum, PTF-26 has received a pledge of $250,000 toward the repairs and upgrades from BusinessFarm International, a business incubator that has a branch committed to charitable work for veterans’ causes.

Looking back at all the changes over the past few months, Baldridge and Rice both said it is remarkable how everything turned out. Key to it all was the common commitment of two nonprofits both looking to bring historic vessels to the inland waterways to teach, train and inspire others and preserve part of America’s maritime history, they said.

“We couldn’t have pulled this off,” Rice said, crediting the Louisville Naval Museum. “A lot of this had to be done out on the fly out in California. Without mutual trust and respect, it couldn’t have happened.”

Caption for top photo: P-520, a World War II Crash Rescue Boat, is headed to the Ohio River. The boat is aboard the mv. St. Georg, a yacht carrier, for trans-shipment through the Panama Canal. (Photo courtesy of Maritime Pastoral Training Foundation)