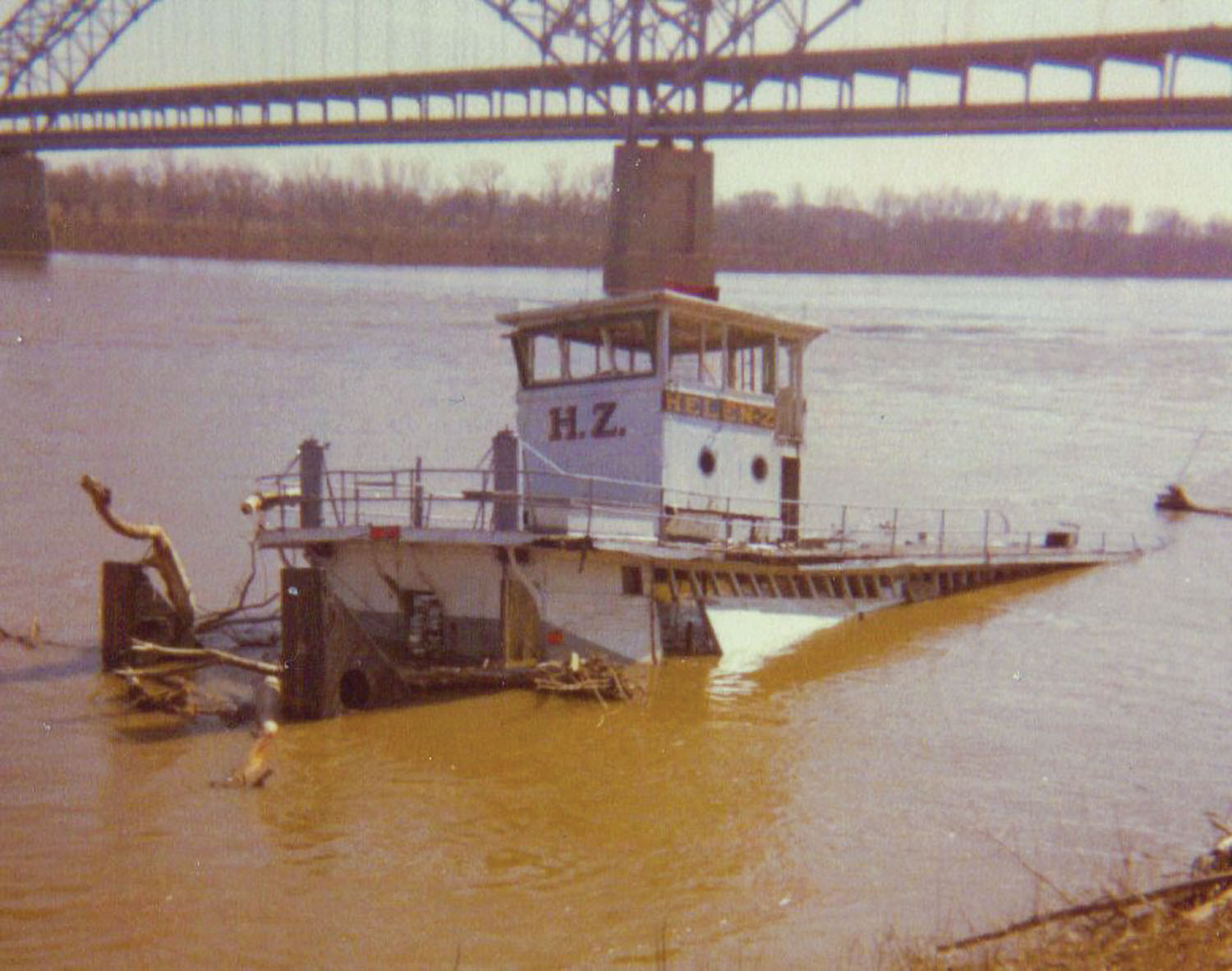 Three steam towboats were built at Dubuque, Iowa, in 1911 for the Kansas City District of the U.S. Army Corps of Engineers. All were constructed on steel hulls measuring 137.6 feet in length by 24 feet in width with a depth of 5 feet. The condensing engines of these “sisters,” named Lieut. Augustin, Lieut. Gurney and Lieut. Lewis, were 13’s, 26’s with a 5-foot stroke.

All three boats were later transferred to the Memphis district and in 1932 were taken to the Dravo Marine Ways at Neville Island, Pa., for rebuilding and to widen the hulls. The Lieut. Augustin was sold at public sale in 1939 to Charles Zubik at Pittsburgh, who renamed the vessel Helen Z and converted it to diesel power, with Fairbanks-Morse engines providing 450 hp.

Eventually, the Helen was sold to the Hillman Transportation Company, which again sold the boat in 1953 to General Barge Company at Pittsburgh. In 1959, the split-wheel sternwheeler again changed owners and went to Point Towing Company at Point Pleasant, W.Va. By 1968, the towboat was owned by M/G Transport Services at Cincinnati.

Five decades ago, the Helen Z was retired and donated for $1 to the New Albany, Ind., Jaycees, who planned to remove the boat from the river, place it atop some short piers that once carried the Southern Railway tracks along the waterfront, and use it as a clubhouse. The old paddlewheeler languished at the foot of the city boat launching ramp for months, much to the aggravation of pleasure boaters who were unable to use the facility. The civic project was fraught with numerous problems, and the boat sank during the winter.

Plans were being made to refloat the vessel when the spring flood of 1970 intervened, completely covering the boat. When the water receded, little remained but the hull and the engineroom bulkheads. A towboat captain later told me that he had seen the pilothouse wreckage lodged high in trees near the site of old Lock and Dam No. 43, some 30 miles downstream. This writer (16 years old at the time) rummaged in the rubble remaining at the New Albany landing and salvaged a large oar with the boat’s name stenciled on it and some unique paddlewheel pieces, including battens, stirrups and a cocked hat.

The city government eventually hired a demolition company to remove the doomed boat from the ramp, ending the saga of a stalwart sternwheeler.

The price of the calendar is $15.95, plus $4.50 for shipping. Add $1 for each additional calendar. To order, send check or money order to Draftware Inc., 41 Ems W32, North Webster, IN 46555. Online credit card ordering is available by visiting the website at www.draftware.com/calendar.

Our appreciation goes out to Capt. Steve Huffman for this ongoing and important contribution to river history.