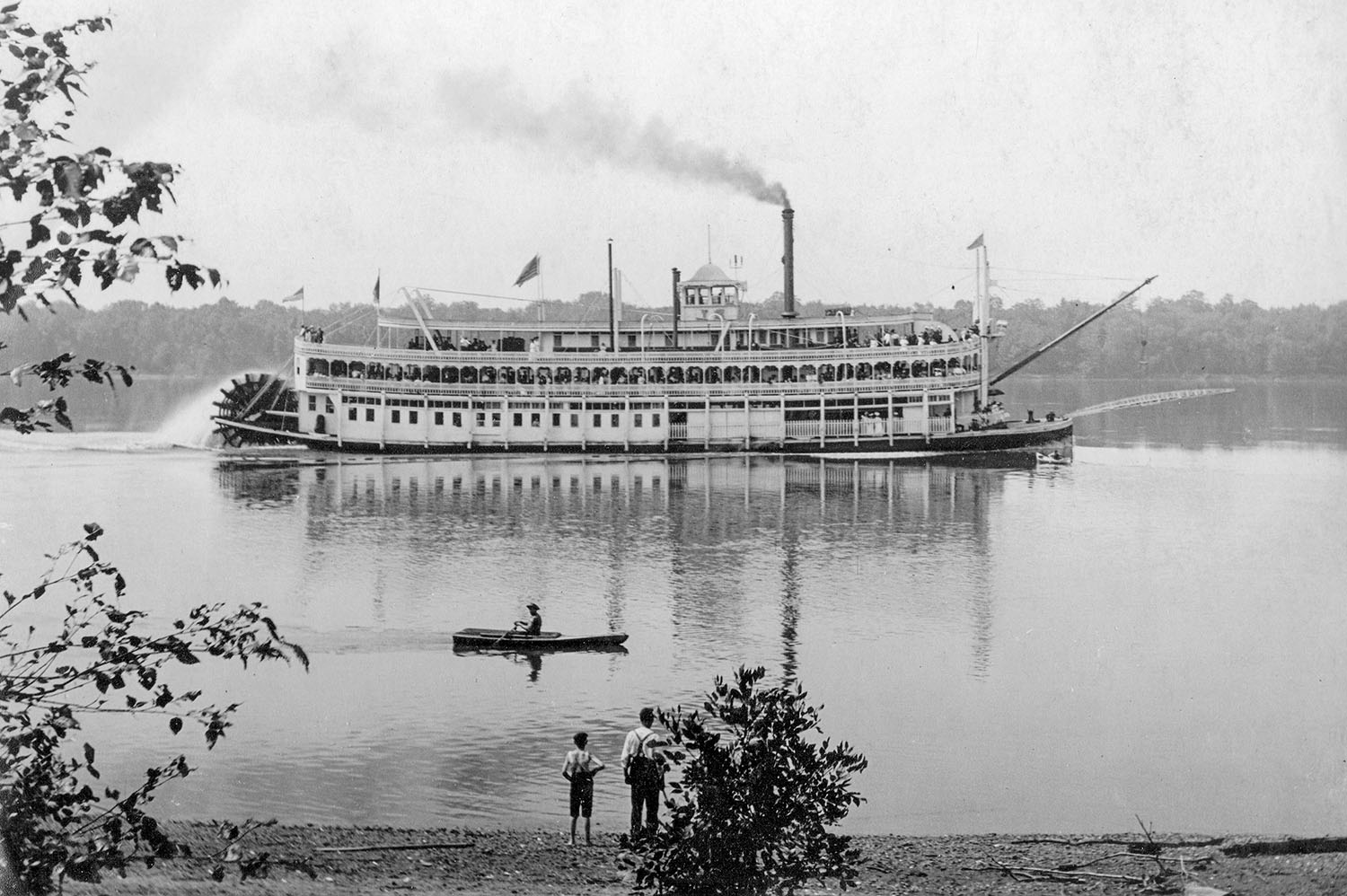 Merry Christmas! As previously presented in the Old Boat Column, one of the most famous excursion boat companies was Streckfus Steamers, widely known on the river system for its fleet of beautiful gingerbread-bedecked sidewheelers and sternwheelers. The company had its main offices in St. Louis and New Orleans.

An early boat of the line (originally known as Acme Packet Company under the leadership of Capt. John Streckfus and D.W. Wisherd) was the J.S., named for Capt. Streckfus. A beautiful sternwheeler, the vessel was built in 1901 by the Howard Shipyard at Jeffersonville, Ind., with a graceful wood hull 175 feet in length by 33 feet in width. It came out new as a morning packet, running on the Upper Mississippi River in the Clinton–Davenport trade in conjunction with the City of Winona and also operating moonlight excursions at Rock Island. It was soon decided that it was “heavy,” drawing too much water to run the rapids up and back every day, so it was withdrawn from the packet trade and entered regular excursion business.

The J.S. carried two boilers (48 inches in diameter by 22 feet) and allowed 188 pounds of steam. The boilers and machinery were manufactured at the Chas. Hegewald Company of New Albany, Ind. The boilers were equipped with a mechanical boiler-cleaner, allowing boilers to be disconnected and cleaned while underway, being independent of each other. It was reported in a Louisville newspaper that the engines, with 16-inch cylinders with a 6.5-foot stroke, were of the high-pressure pattern with California cut-off. Also noted was the steel doctor, steam ship-up rigging, cast steel crossheads, flanges and steel cylinder timbers.

The sternwheel was 22 feet with a 9.5-foot shaft, containing 18 buckets. The forecastle was a perfect semicircle, enabling the iron landing stage, hoisted by steam, to reach the bank in any position, making it possible to get in and out of landings faster.

The kitchen, pantry and crew’s quarters were located on the main deck, with the officer’s rooms on the texas deck. These staterooms were equipped with steam heat, fans, flush commodes and basins with running water. The boiler deck cabin, where the dance floor was located, was enclosed with sliding glass windows, the frames constructed of lightweight chestnut. An ornate and highly polished ice cream bar and fountain, made of white marble, was also on the second deck, along with other modern appliances and equipment.

The electric light plant aboard the J.S. was furnished by the Carlisle & Finch Company, providing power for 400 incandescent lights, one 6,000 candlepower headlight and 2,000 bulbs outlining the decks. The steam steering gear was produced by Crawley & Johnston (a rig by this Cincinnati firm is still in use aboard the Belle of Louisville), and the roof bell, cast in silver, was by the E.W. Vanduzen Company, also of Cincinnati. A steam calliope, standard equipment on excursion vessels and capable of being heard for many miles to attract trade, was placed on the roof, often played by the legendary musician Fate Marable beginning in 1907.

While returning to Lansing, Iowa, from La Crosse, Wis., at dusk on Saturday, June 18, 1910, with Capt. George S. Nichols at the wheel, the J.S. caught fire and burned at Bad Axe Island, near Victory, with 1,185 passengers aboard. One of those passengers, John Plein, had been confined to the brig, located in the hold, and allegedly set the blaze, losing his life. A lady passenger, Emma Randall, was the only other casualty, jumping overboard in a panic and drowning.

The steamboats North Star and Harriet quickly came to the scene, transporting those rescued to the island. Numerous launches and rowboats came to the passengers’ assistance. When it became obvious that saving the burning boat was impossible, the North Star attempted to tow the J.S. into midstream with the intent of sinking it and extinguishing the blaze. However, before this could be accomplished, the boat became wholly enveloped in spectacular flames that shot skyward for hundreds of feet into the night sky, making it necessary to cut the lines and permit the boat to drift back to the place the vessel had originally landed and where it soon sank.

By early morning light, all that remained was smoldering wreckage in the water and the landing stage lying on the river bank. The J.S. was the only steamboat that Streckfus would ever lose to a tragic accident throughout its lengthy existence.