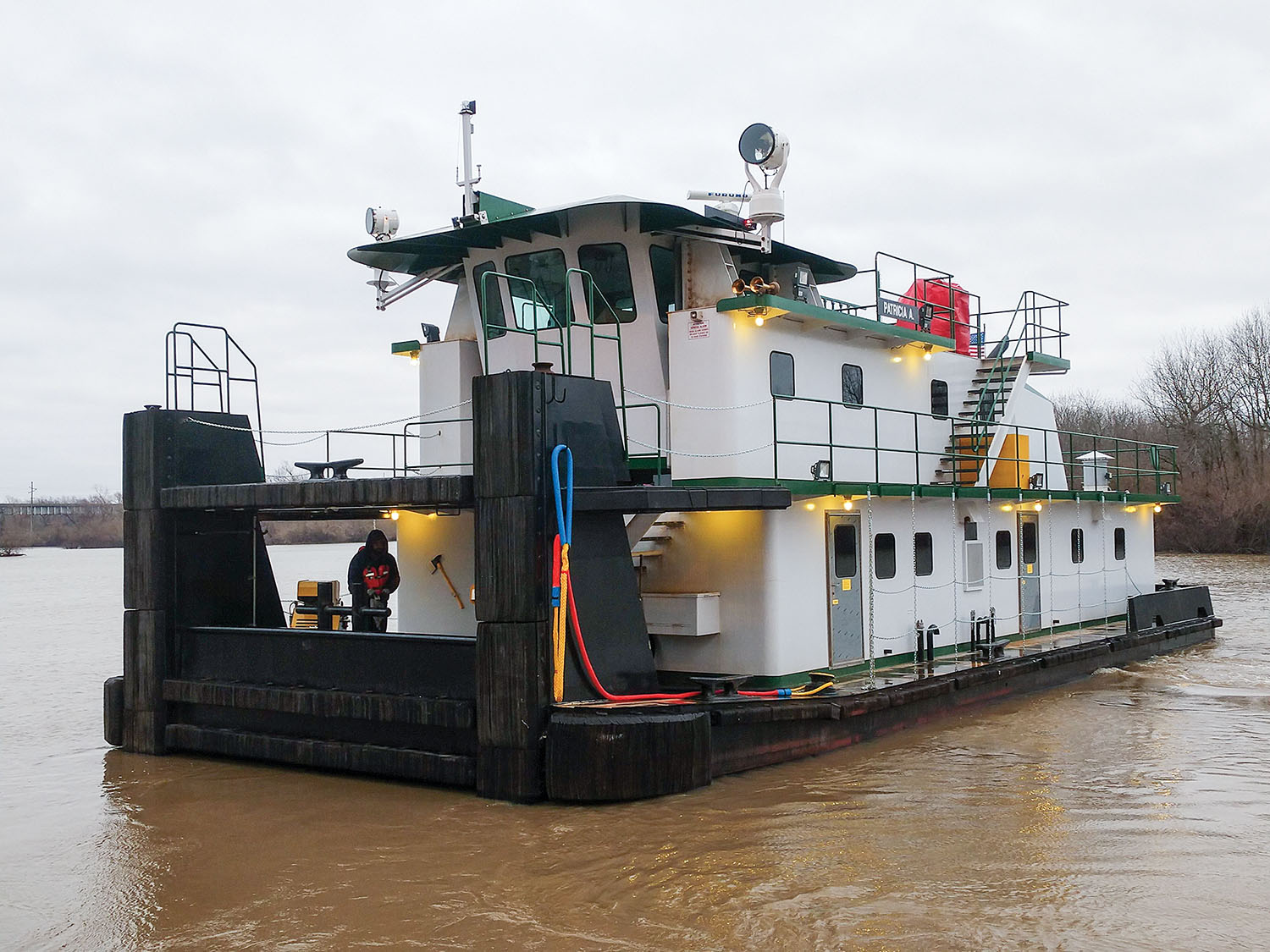 The last time Southern Illinois Transfer (SITCO) put a new boat into service, the Sparta, Ill., company had to wait for the Kaskaskia River to fall so that the boat could clear the bridges there. This time, Kurt Johnson, co-owner of SITCO, took no chances. He built the mv. Patricia A with a retractable pilothouse.

Constructed by Barbour JB Shipyard, a vessel builder at Mile 18 on the Kaskaskia that is coincidentally owned by Johnson and his partners, the new boat’s pilothouse lowers to 19 feet; when fully raised, it has an eye level of 30 feet. Other than that, it is identical to a towboat the shipyard completed just prior, the mv. Karl E. Johnson.

The Patricia A, which measures 68 by 28 by 9.6 feet, is powered by a pair of Cummins QSK19 Tier 3 engines capable of generating a total of 1,500 hp. The Sterling Marine design incorporates a double-chine hull that was developed years ago by the forerunner of Barbour JB Shipyard, Barbour Metal Boat Works. The engines are coupled to Twin Disc Veth V700 Z-drives with 55-inch wheels. The combination of the hull shape and the Z-drive propulsion has resulted in significantly improved performance, Johnson said.

“When the Karl Johnson was launched,” Johnson said, “we wanted to compare its power to the Kaskaskia Warrior, a 1,500 hp. conventional boat we built the year before. We faced the towboats up on the Mississippi and started pushing. The Warrior never stood a chance. Even with the Warrior having the downstream advantage, the Karl Johnson quickly recovered and was pushing the Warrior upstream at about 1 knot.

“Then, when we swapped them around, the contest didn’t last long. The Karl Johnson shoved the Warrior downstream at almost 5 knots.”

The Z-drives were a perfect choice for the new build, which is a lunch-bucket boat with an 8-foot, 6-inch draft and a need for optimum maneuverability in and around the docks on the Kaskaskia, Johnson said. Better insulation from noise and vibration—furthered by the Christie & Grey engine mounts—plus never having to drydock the boat were among other considerations to install Z-drives. The engineroom itself is roomier because the Kubota 40 kw. generators were relocated to another room on the main deck and are radiator-cooled to make maintenance easier and ensure adequate cooler space in the hull for the main engines.

The Patricia A has tankage for 15,400 gallons of fuel, 2,100 gallons of water, 120 gallons each of lube and gear oil and 250 gallons of hydraulic oil. The electric-over-hydraulic steering system is by Veth; the engine and fire safety alarms are Fire Lite. There are two Mitsubishi mini split air conditioning and heating systems.

The electronics package includes Furuno radar, AIS and Standard radios. There is a fleet deck and two Wintech 40-ton winches. The hull is protected by M&M Bumpers.

The Patricia A is the 10th boat in the SITCO fleet and the fourth to be built by Barbour JB Shipyard. It serves the terminals on the Kaskaskia and performs fleeting and harbor services at several nearby docks on the Mississippi River.

Barbour JB has started construction of its fourth boat for SITCO. The vessel will be a retractable, identical to the Patricia A, and will be named the Robert S. Wilkins.

The Patricia A is named for Patricia Arbeiter, the late mother of two of Johnson’s partners.

Caption for top photo: The Patricia A with the pilothouse in the down position.