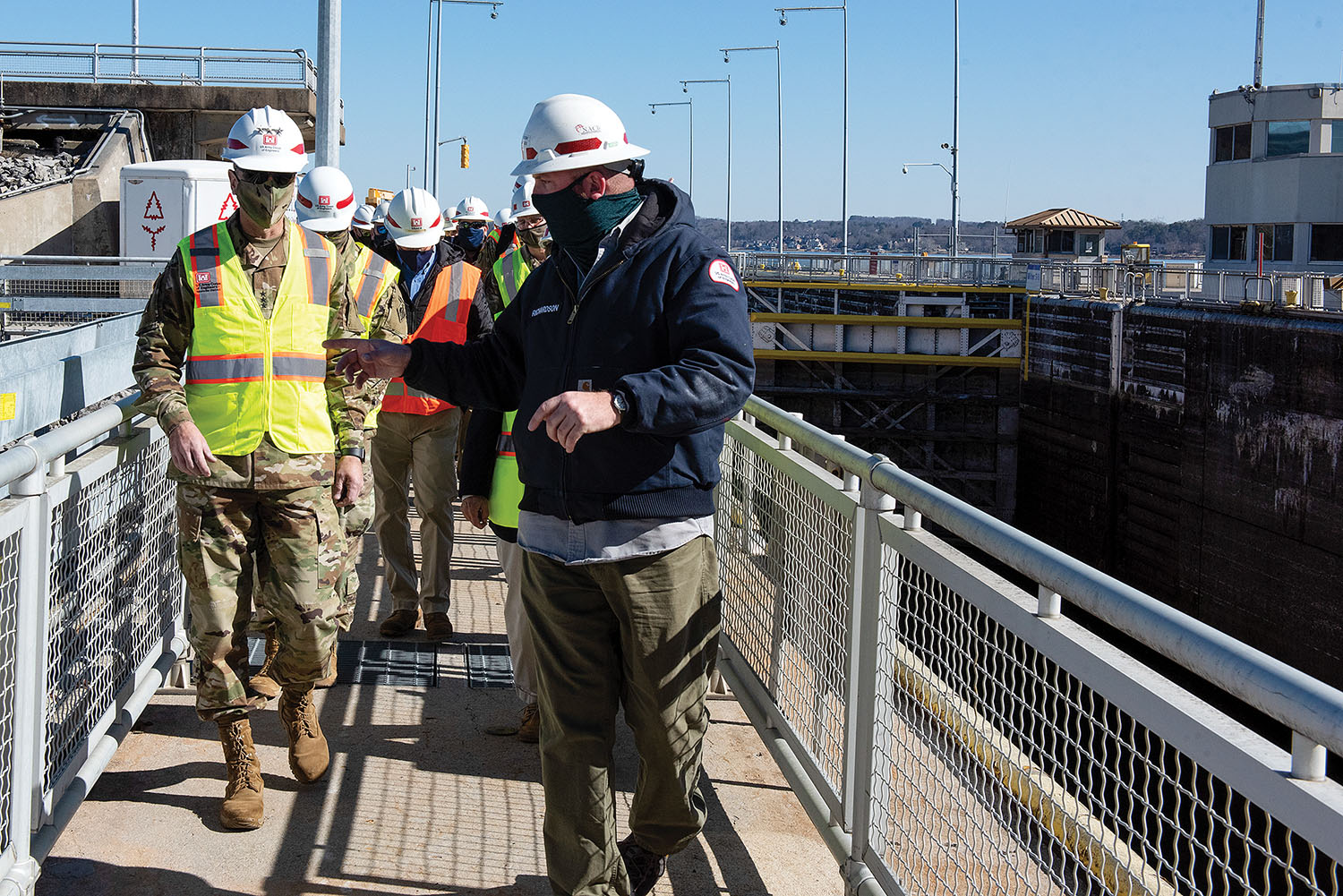 Gen. Scott Spellmon, commanding general of the U.S. Army Corps of Engineers, visited the Chickamauga Lock Replacement Project on February 3 to meet with project managers and engineers and get a better understanding of the ongoing construction.

Alkali aggregate reactions present in the concrete since the existing lock’s original 1940 construction have resulted in concrete growth and cracking throughout the structure. As a result, a new lock chamber is being built at the dam on the Tennessee River, seven miles upstream of Chattanooga, Tenn., at Tennessee River Mile 471.

Spellmon welcomed U.S. Rep. Chuck Fleischmann of Tennessee, and they received a project update, toured the existing lock and then moved inside the cofferdam to get an up-close view of work crews placing concrete to build a monolith for the new 110- by 600-foot lock.

The contractor, Shimmick Construction, operated a conveyor system to move concrete more than 900 feet over the existing lock into a tower-belt system and then down inside the cofferdam. The system places 200 yards of concrete per hour.

Fleischmann praised the work of the Corps of Engineers and noted that $191 million has been appropriated for the project in the fiscal year 2021 budget.

Fleischmann said the Corps of Engineers is doing an exemplary job of maintaining the existing navigation lock to keep it open to commercial and recreational vessels until the new lock begins operating.

As the alkali reaction occurs, rocks throughout the lock form an expansive white gel that resembles calcium build-up common to home showers and bathtubs, project manager Adam Walker said previously. Since construction, the existing lock is now 1 foot longer and 4 inches taller than when it was built. Although the concrete growth can be mitigated, it cannot be halted, so the solution is to construct a new lock. Because of the aggregate reaction, the existing lock has a finite life and will eventually have to be closed due to stability concerns, according to the Nashville Engineer District. Instrumentation all over the lock monitors for any sign of growing structural fatigue.

Spellmon, who became chief of engineers in September 2020, said Chickamauga Lock is one of 239 lock chambers that the Army Corps of Engineers is responsible for nationwide.

“I want to thank Congressman Fleischmann for his leadership in getting the Corps the funding to bring this project to fruition,” Spellmon said. “The vision of the Corps is ‘We want to deliver engineering solutions for our nation’s toughest challenges.’ This is certainly one of them, and with the congressman’s leadership, he’s giving us the resources to get a project done on time and within budget.”

Construction funding for the project was first received in fiscal year 2004 to begin road relocations. Lock design was completed in 2009; however, the project did not receive consistent annual funding, leading to delays. The project has not been included in the president’s budget since 2010, although since 2015 funding has been received through the Corps’ Work Plans from funding pots created by Congress.

Shimmick Construction has worked more than 1 million man-hours constructing the lock chamber without a lost-time accident.

“That’s a big, big deal,” Whittle said. “As you can tell, there is a lot of work getting done here. They are doing a great job. And again, with all that work and everything you have witnessed observing the project, you can see that safety record is really something to behold.”

Whittle also noted the success of the partnership between the Corps of Engineers and the Tennessee Valley Authority. Chickamauga Dam is a TVA project, but the Nashville District operates and maintains the lock.

“I just want to thank them publicly for everything they do to help us, and I know we are helping them as well,” Whittle said. “That partnership is absolutely vital.”

Avichal, who is responsible for managing the construction project, said he is massively impressed with the teamwork between the Corps, TVA and the contractor, which is placing 240,000 yards of concrete.

To put the concrete placement in perspective, he said it’s enough to build a two-lane highway from the lock in Chattanooga all the way to Nashville, Tenn.

One of the next steps in the project will be the award of a contract for the upstream approach wall, scheduled for September. Additional work on the downstream approach walls, decommissioning of the existing lock and site restoration are planned as part of future contracts.

Walker said the Corps of Engineers has expended $316 million or about 42 percent of the total estimated project costs through December 2020. With the $191 million appropriation announced by the congressman, all future construction contracts can be fully funded, he said.

Currently, the Chickamauga lock is 60 –by 360 feet, a size resulting in delays for tows transiting through it. In addition to easing concerns about the concrete overgrowth, replacing the lock is designed to speed the process for tows locking through. The new lock will allow the ability for up to nine jumbo barges to pass through at one time. The existing lock can handle only one barge at a time.