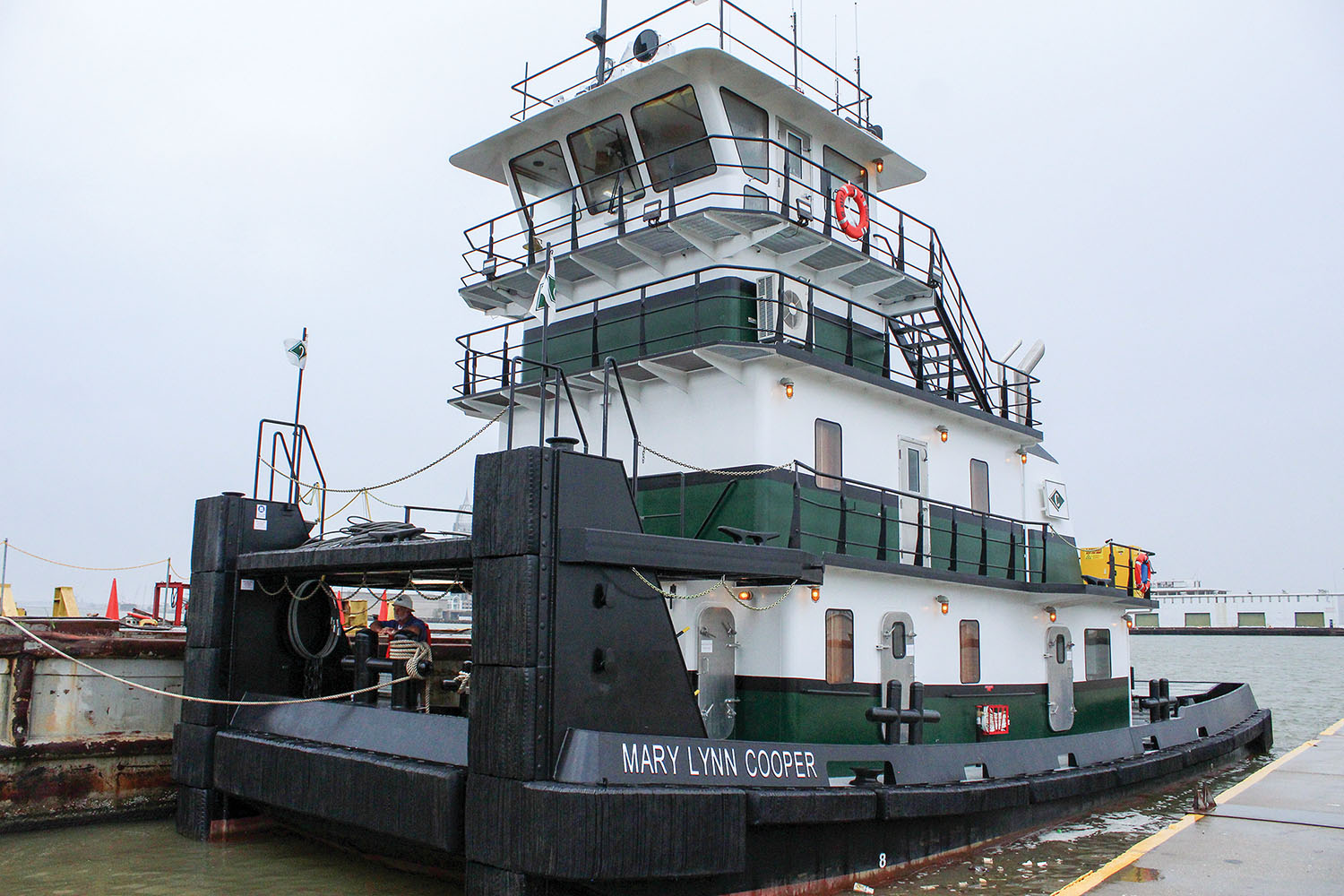 Cooper Marine & Timberlands Corporation (CMT), a part of the Cooper Group of companies based in Mobile, Ala., recently took delivery of the first of two vessels from Blakeley BoatWorks, a sister company out of Mobile as well. The twin-screw towboat will serve the company’s fleets between Baton Rouge, La., and Head of Passes on the Lower Mississippi River.

Blakeley delivered the new boat, the mv. Mary Lynn Cooper, a few months ago. The other boat, the mv. Gretchen Cooper, is expected to join CMT’s fleet soon. At 110 feet long and with 3,400 hp., it will be larger than the Mary Lynn and is believed will be one of the first inland waterway vessels to be powered by Caterpillar Tier 4 compliant engines.

The Mary Lynn also features Johnson Heart cutlass bearings and Thordon bushings on its main and flanking rudders. The boat has tankage capacities for 22,000 gallons of fuel, 5,200 gallons of potable water, 150 gallons of hydraulic oil and 660 gallons of slop oil. The vessel also has accommodations for six crew members.

Fendering aboard the Mary Lynn Cooper is by Schuyler Companies. The vessel also features paint from Sherwin Williams, Fernstrum Gridcoolers and two Wintech 40-ton deck winches. The vessel’s switchboard is by RIO Controls & Hydraulics, while its radar, AIS, bridge alarm system, GPS and transducer are from Furuno. The new boat’s loud hailer and VHF radio are from Standard. It has a compass from Ritchie Navigation and a wind meter from Davis Instruments. Hepworth Marine supplied the vessel’s front window and wipers, while Dale’s Welding supplied its aluminum doors.

Blakeley BoatWorks, located on the Mobile River just north of Interstate 10, covers 26 acres and features a 1,900-short-ton-capacity floating drydock and a 660-short-ton Travelift. The shipyard offers scheduled maintenance, emergency repairs and service, both onsite in Mobile and offsite. The shipyard includes four covered fabrication shops and can accommodate up to 15 vessels at a time.

Since being acquired by the Cooper Group some seven years ago, the facility has grown from 18 employees to nearly 120, according to its website, to become a Gulf Coast leader for shipbuilding and repair with its convenient location to the Warrior Tombigbee Waterway, Tennessee-Tombigbee Waterway, Gulf Intracoastal Waterway and the Gulf of Mexico.

The shipyard was formerly C&G Boat Works, established in the 1980s. It specialized in mostly crew boats and the like, although it built two shallow-draft towboats for Parker Towing around 2012 that are easily recognized by their octagonal-shaped pilothouses. They are the mvs. Megan Parker and Charles Hawn. The company failed a few years after that and was bought by Cooper.