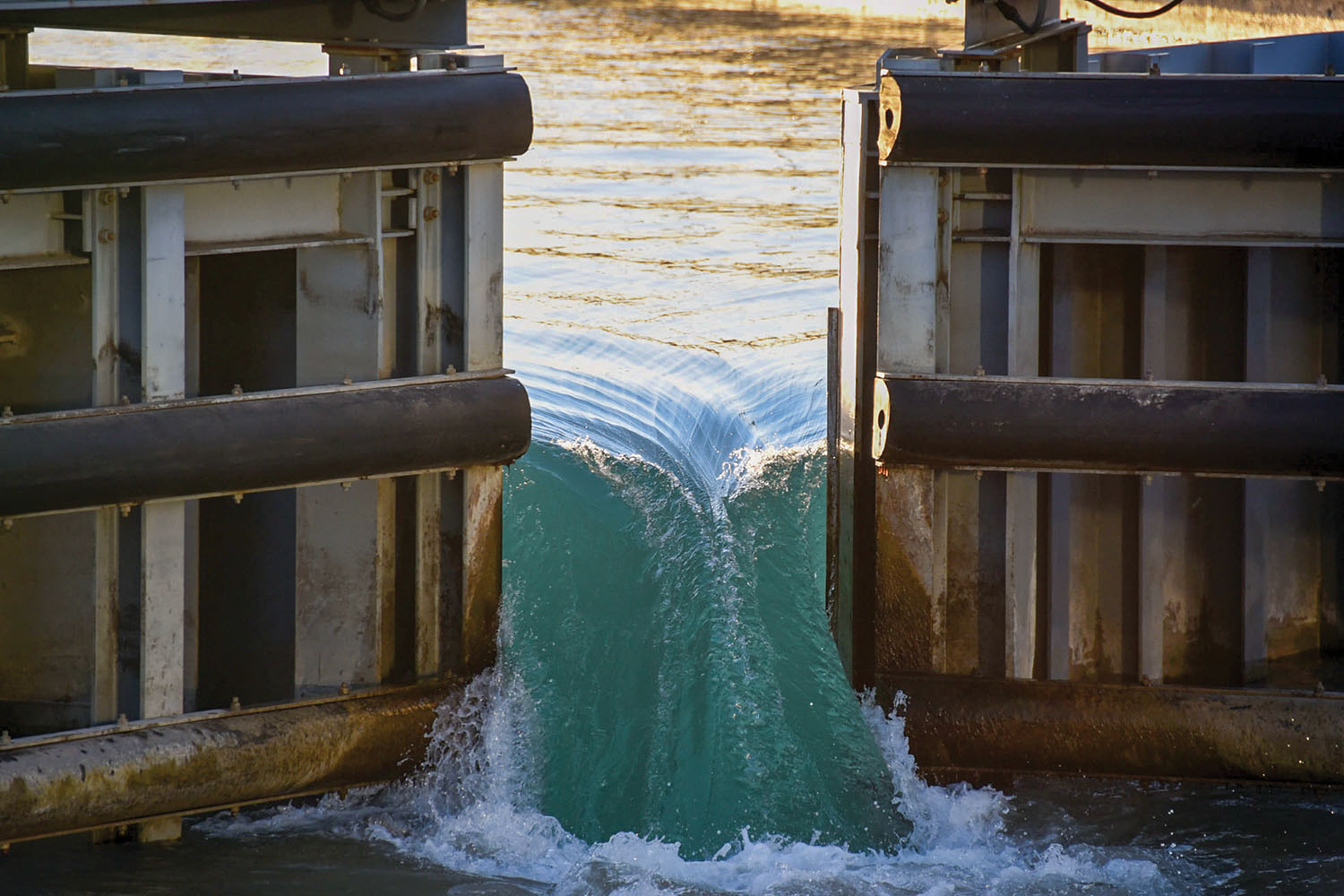 The Chicago Harbor Lock reopened April 15 after a five-month closure to reconstruct a portion of the north chamber wall, with similar closures expected over the next four winters.

The closures are part of a larger rehabilitation project being conducted due to the age of the 600- by 80-foot lock, built between 1936 and 1938 by the Sanitary District of Chicago as a component of plans that reversed the flow of the Chicago River so that it flows away from Lake Michigan instead of into it.

“Exploratory demolition was conducted and interim repairs completed,” said Tim Kroll, chief of the Chicago Engineer District’s operations branch. “Wall resurfacing will continue over the next two winters, into the spring of 2024.”

Each year, the lock, which is located in Chicago and adjacent to Navy Pier, will close November 16 through April 14 of the next year, avoiding the chamber’s busiest season. A 13-member team normally operates the clock 24 hours a day, year-round.

Lockmaster Selwyn Tyrone Valley said the lock averages 60,000 to 65,000 vessels every April to November. In 2019, 11,215 commercial vessels used the lock. Most were touring vessels, including ferries and water taxis. In 2019, 1.16 million passengers rode through the lock.

The Chicago Harbor Lock separates the waters of Lake Michigan from the Chicago River. It is one of two entrances from the Great Lakes to the Illinois Water System. The other is the T.J. O’Brien Lock and Dam on the Calumet River.

Not all went as anticipated during the most recent closure, Nguien said.

The district had planned to chip away deteriorated concrete along the west section of the north chamber wall, put in new re-bar and then place steel armor plating, anchoring the plating to the wall before filling in with concrete behind it.

The steel plating was supposed to be more durable over time, Nguien said. Such plating had been used in small wall sections previously, but never to replace a complete wall.

“Unfortunately, there were issues with the fabrication and installation,” Nguien said.

When installed and placed under pressure, the steel plating bulged outward.

“This was a test for us, to see if it worked,” Nguien said. “We’re going back to our standard design.”

Plans now call for the deteriorated concrete to be replaced using cast-in-place concrete.

None of the work on the walls or the floor require the chamber to be dewatered, but equipment is placed inside the lock to complete the repairs, requiring the annual closures, he said.

Before reopening the lock, crews from the Corps and the U.S. Geological Survey worked together to conduct a reverse backflow test to determine water flows along the lock floor at different settings, part of the preparations for the lock flooring work in future years.

“Due to backflows and emergency lockages over the years, some of the floor slabs have moved, and we are going to make it more stable,” Valley said. “These slabs are in place to prevent uplift of the chamber floor.”

It normally takes 15 to 17 minutes for vessels to lock through from the Chicago River to Lake Michigan or vice versa, with a 2- to 5-foot difference between lake and river levels. Emergency lockages occur when marine fire or police or the Coast Guard need to make a quick passage, taking as little as 3 minutes, 5 seconds, Valley said. Such lockages can create a backflow into the lock, putting more pressure on the slabs— essentially a series of concrete blocks—in the floor.