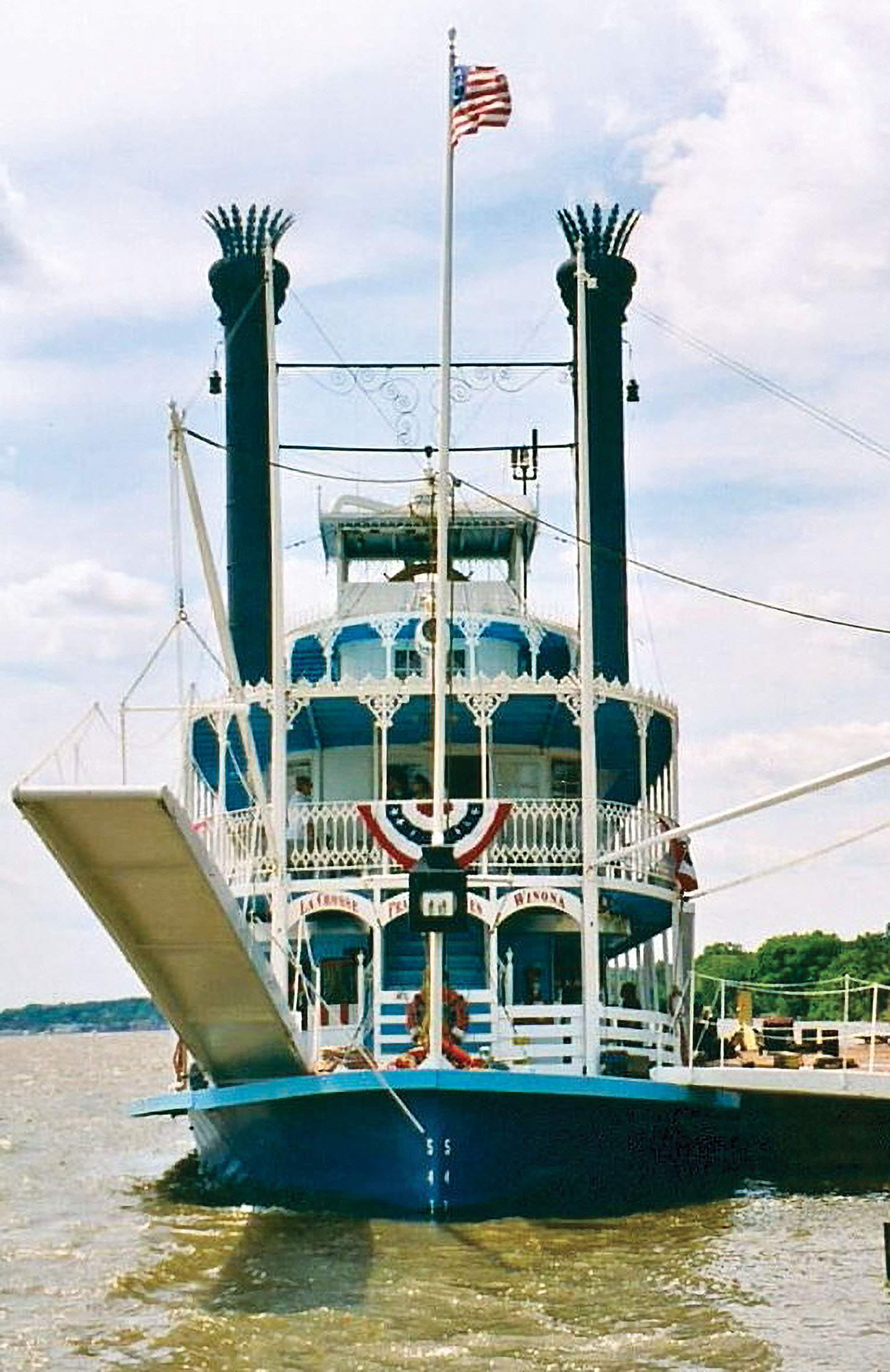 Steamboats Traveled Gently On His Mind

The river community recently observed the 20th anniversary of the untimely passing (age 63) of Capt. John Hartford. Born in St. Louis in 1937, Harford (original spelling) attended the Community School, where he became infatuated by riverboats from Ruth Ferris, his fifth-grade teacher. He later worked on the river as a watchman on the Str. Delta Queen and as a towboat deckhand. As a musician, Hartford is best known for composing “Gentle on My Mind.” Of the extant steamboats, Hartford was a devoted fan and crew member of the Julia Belle Swain. He often included the petite paddlewheeler in his musical compositions and video productions.

The Julia Belle Swain was completed at Dubuque in 1971 by Capt. Dennis Trone; it was the last boat ever constructed by the Dubuque Boat & Boiler Works. Launched on November 12, 1970, the new 400-passenger steamer was constructed on a steel hull measuring 108 feet long by 27 feet wide with a draft of 3 feet. A single automatic boiler, manufactured by the Vapor Corporation, supplied the steam. The Gillett & Eaton reciprocating engines (12-inch cylinders with 5-foot stroke), manufactured at Lake City, Minn., were recycled from the catamaran ferry City of Baton Rouge, built at the Howard Shipyard in 1916 and operated at Baton Rouge, La., until 1968.

The new steamboat was christened by Julia Belle Swain Shelton, daughter of Capt. Percy Swain, and for whom the original Julia Belle Swain (formerly the Charles E. Cessna) was named. Especially popular with steamboat historians was the pilothouse, (containing a 7-foot pilotwheel, which was also retained from the City of Baton Rouge), two landing stages, copious gingerbread trim and towering “Mississippi style” smokestacks topped by decorative feathers. Elegantly appointed throughout in authentic steamboat decor, the Swain carried a 32-whistle steam calliope; the keyboard is installed inside the cabinet of an antique pump organ in the boat’s cabin.

Initially based at Peoria, Ill., for the Sangamon Packet Company, the Julia Belle operated as a local excursion boat. In later years, overnight trips were offered with lodging provided at Starved Rock State Park. After the closure of the lodge, Trone moved the operation to the Mississippi River at Le Claire, Iowa, from whence trips were run to the Chestnut Mountain Resort near Galena, Ill.

The steamboat has been featured in numerous publications, including Midwest Living, and played starring roles in several movies, including “The Adventures of Tom Sawyer,” the IMAX feature “Mark Twain’s America,” and “Life on the Mississippi,” starring Robert Lansing as Capt. Horace Bixby and David Knell as young cub pilot Samuel Clemens.

The Julia Belle participated in the Kentucky Derby Festival Steamboat Race at Louisville, Ky., in 1975, 1976 and 1977, winning the competition with the Belle of Louisville and Delta Queen in 1976. After operating at various locations for 24 years, the riverboat was sold at auction by Trone (1930-2008) in 1995 to Robert Kalhagen of Ideal Crane Rental Inc., at Madison, Wis. Under the banner of the Great River Steamboat Company, Kalhagen operated the steamboat, with Capt. Carl Henry as pilot, from the levee in Riverside Park at La Crosse, offering lunch and dinner cruises, as well as private charters and overnight trips to Prairie du Chien, Wis., and Winona, Minn.

It was announced in early 2009 that, as a result of the economic downturn, the steamboat would be laid up for an indefinite period. In August 2013, the steamboat was acquired by a nonprofit foundation whose goal was to return the vessel to a like-new operating condition. At this writing, those plans have been canceled, and the boat languishes at an Illinois River mooring.