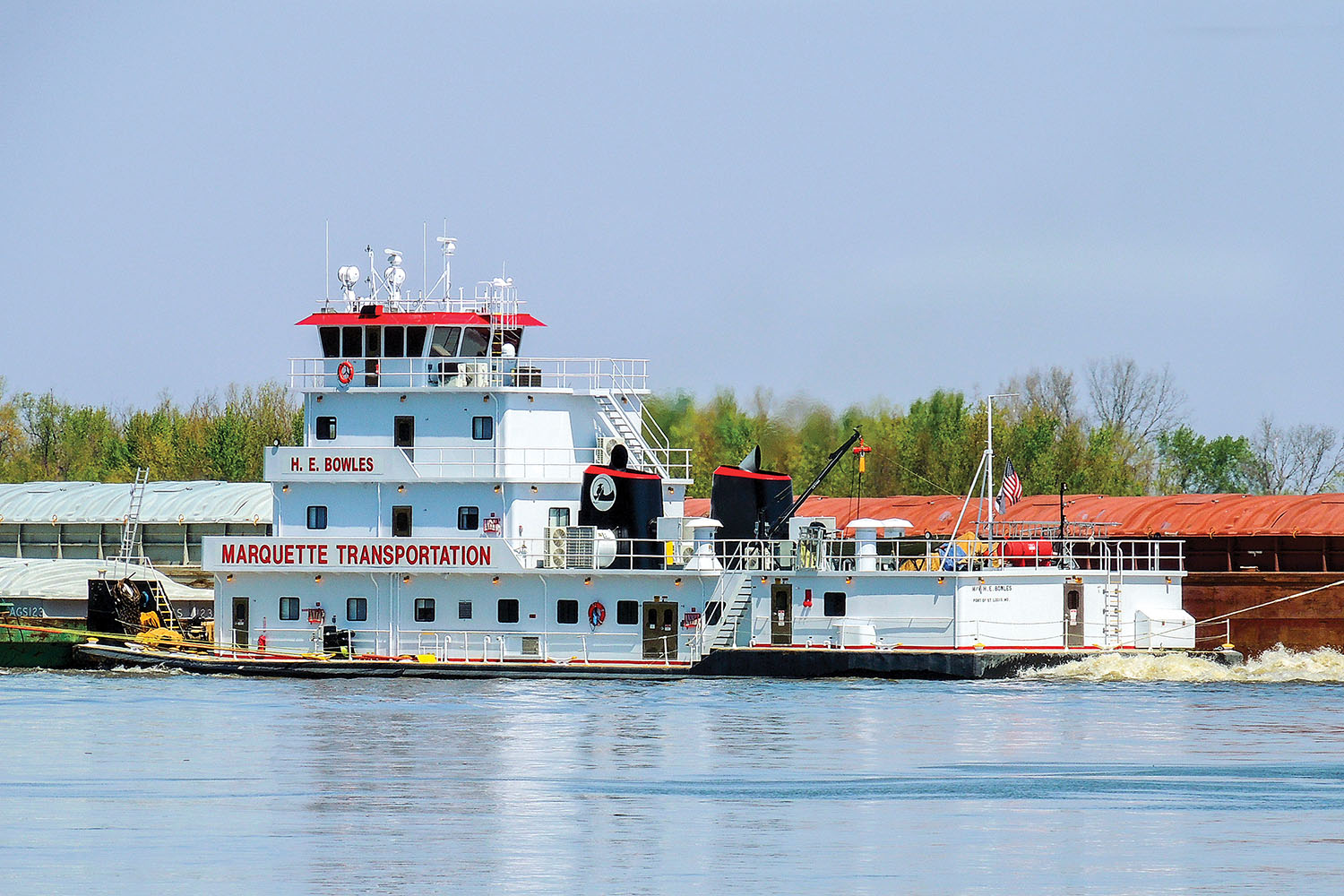 Some older veteran river industry personnel, executives, aficionados and others associated with the inland marine industry (especially the upper Ohio River area) may experience a bit of déjà vu when they hear the name of Marquette Transportation’s new towboat, the 6,600 hp. H.E. Bowles. That’s because two boats with the same name were mainstays along the upper Ohio River back in the 1960s and ’70s.

However, even as uncommon as the name may be, the new powerhouse has no connection with the two previous boats with the same name, nor does the honoree. The first two boats with this name operated in the petrochemical trade along the Kanawha and upper Ohio rivers for Capt. Robert H. Bosworth and his affiliated companies out of Pt. Pleasant, W.Va.

The first was an 1,800 hp., 80- by 24-foot boat built in 1956 as a single-screw vessel at Greenville, Miss., for Vest Towing Company as the Coleman D. It was converted to twin-screw two years later with the addition of another GM 12-567 diesel. It was renamed H.E. Bowles when acquired by Bosworth’s Point Towing Company in 1961.

The second H.E. Bowles was acquired and renamed 10 years later by Bosworth’s G&C Towing Inc. This one began life in 1929 as the Dwight F. Davis, an oil-fired, 1,000 hp. twin-screw steamer for the Inland Waterways Corporation, St. Louis. The 140- by 25-foot vessel was converted to diesel with a pair of GM 12-567 engines developing 1,800 hp. when sold to Warrior & Gulf Navigation in 1947 and renamed Chickasaw two years later.

It’s only a coincidence that the two boats from five decades ago bear the same uncommon name. Capt. David Smith, river historian and frequent contributor to The Waterways Journal, says the two earlier boats were named in honor of H.E. (Hansford Eugene) Bowles, who, he understands, was married to the sister (Catherine) of Capt. Bosworth and was business manager and sometimes partner in some of Bosworth’s various river ventures over the years.

Darin Adrian, executive vice president of Marquette Transportation, said the new and much more powerful H.E. Bowles is named after Erskine Bowles, a former member of the advisory board of BDT, an outside investor in Marquette Transportation, where he also served as an adviser to Marquette’s board of directors from 2015 through 2019. Born and raised in Greensboro, N.C., Bowles had a distinguished career in finance and politics, Adrian noted.

“Erskine Bowles brought energy and passion to each Marquette board meeting, despite the fact that our company is much smaller than those of other boards on which he served, including General Motors, Morgan-Stanley, Facebook and Norfolk Southern,” Adrian said. Bowles was also deeply involved in politics, where he served as White House chief of staff for President Bill Clinton and is widely regarded as a leader in the Democratic Party, where he pushes for fiscal discipline.

“While Erskine and I have many different political views, we agreed on more items than perhaps you may expect, and I have always respected his thoughtful debates,” Adrian said.Bowles announced at the end of 2019 that he was retiring from all his corporate boards, including Marquette’s. “Marquette named a vessel after Erskine in honor of his retirement from our corporate boards and out of respect for the advice, passion and friendship he shared with our leadership team,” Adrian said.

The new H.E. Bowles was built on the 138- by 44-foot hull of Marquette’s previous George King, which burned January 24, 2018, while northbound with a 30-barge tow at Lower Mississippi River Mile 390, near Vicksburg, Miss. Marquette acquired the vessel, the former Joe P. Gills, from Indiana-Michigan Power Company in 1994. It was built by St. Louis Ship in 1976 and rated at 5,600 hp. before various engine modifications over the years increased the rated power to 6,140 hp.

The entire superstructure was designed with the latest SOLAS (Safety Of Life At Sea) softcore interior system provided and installed by Marine Interior Systems of Houma, La.

The completely new boat is now rated at 6,600 hp. with GM 16-645-F7B engines. The Falk 3040 MR (4.345:1) reduction gears were refurbished by Mike’s Inc. of Roxana, Ill., and the new 275 kW. John Deere generators came from CK Power of St. Louis. New deck equipment includes a capstan along with four 65-ton Wintech electro-hydraulic deck winches. Valtec Hydraulics of St. Louis along with River Marine Electronics of Paducah provided and installed all essential topside components for the new electronic-over-hydraulic steering system. The fire-detection and -suppression system was designed and installed by the Herbert S. Hiller Corporation of New Orleans. All other essential equipment was provided through JMI and local vendors.

Jerry Jarrett, senior vice president of engineering at Marquette, was highly complimentary of several key management personnel at James Marine. He cited Eric Crabtree, senior vice president of operations, Robert Belt, project foreman, and Bobby Thompson, shipyard superintendent, for their leadership on the project. He went on to praise the efforts of Eric Haney, vice president, and Mike Brown, general manager, at James Built Inc., which was responsible for the design and construction of the superstructure.

“Working with the JMI team to rebuild this vessel was challenging, exciting and rewarding,” Jarrett said. “We appreciate everything the JMI team and other vendors on the project did to make this rebuild a success and we are very proud of the outcome. This is a boat that will be a great asset within the Marquette fleet for years to come.”

Josh Esper, Marquette’s executive vice president of engineering and procurement, added, “Those who know Jerry (Jarrett) will not be surprised that he was able to take a classic St. Louis Ship-designed hull and rebuild the boat from the waterline up in under 12 months. His knowledge and passion for towboats, ability to lead a project team and his desire for perfection resulted in a fantastic towboat that was designed in every element with Marquette’s mariners in mind,” he said.

The new boat has been working most recently along the Upper Mississippi River and turning at Cairo.

Marquette is also renaming three recently acquired Dravo Viking class towboats from ACBL. Built originally for Indiana & Michigan Electric in 1976, the boats all measure 140 by 42 feet, and, according to the 2021 Inland River Record, are powered by twin GM 16-645E7 diesels.

The Capt. John Reynolds, originally named the C. J. Bryan, is being renamed Sarah Anne Judd, in honor of the wife of Damon Judd, Marquette president and chief operating officer.

The R.L. Carter Jr., originally the A.N. Prentice, will be renamed Sheila K. Barger in honor of Marquette’s chief accounting officer, who joined the company in 2007.

The D&R Boney, originally the G.L. Furr, is being renamed G.W. Frayser in honor of Senior Port Captain Gary Frayser, a 40-year river veteran who has been with Marquette for more than 13 years.

Caption for photo: The mv. H.E. Bowles was completely rebuilt on the hull of the former mv. George King, which was destroyed in a fire in January 2018. (Photo by Mike Herschler)