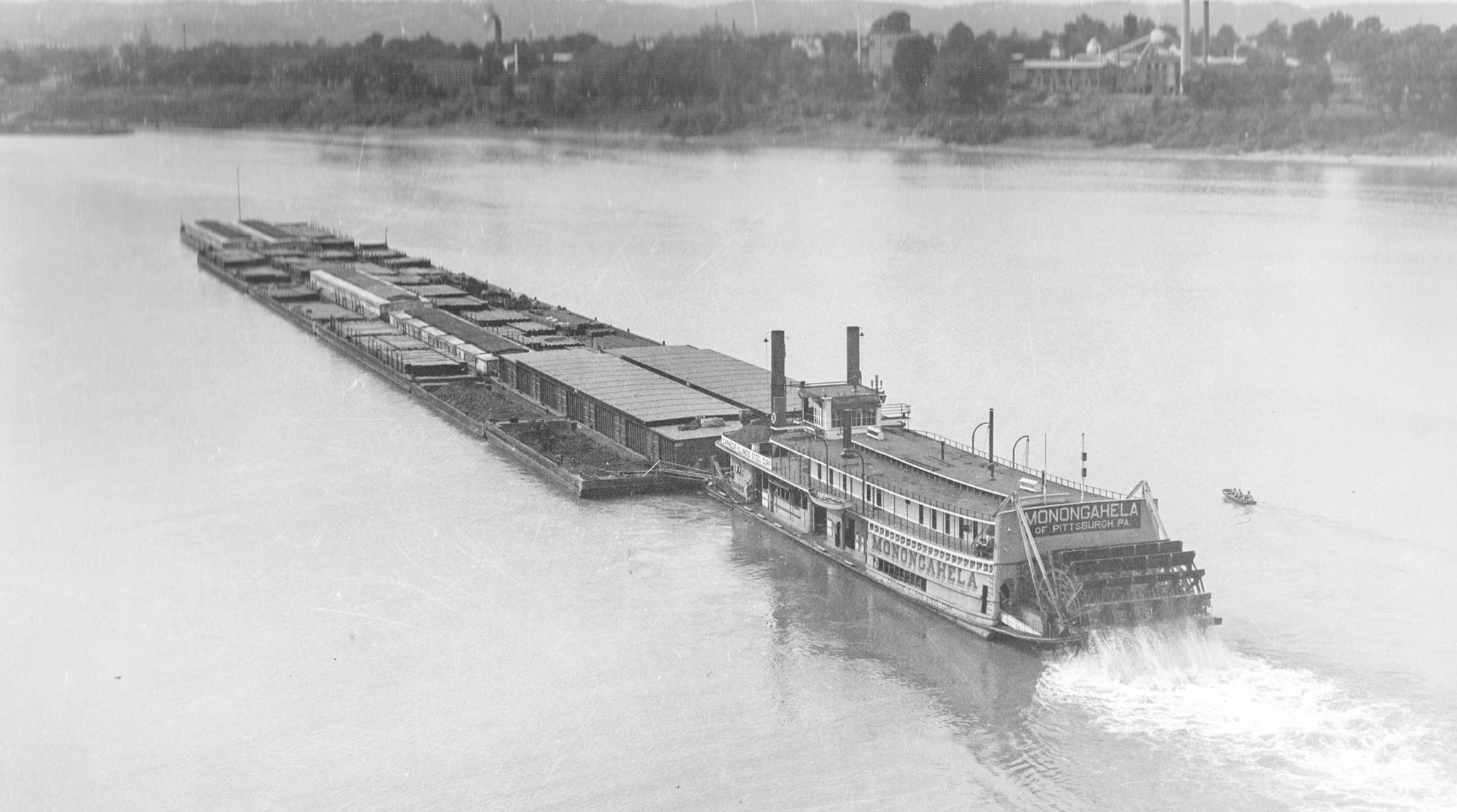 The American Bridge Company at Ambridge, Pa., constructed, in 1927, a steel hull measuring 169.8 feet long, 38.9 feet wide and having a depth of 6.5 feet for the Carnegie Steel Company, which had contracted for the new towboat in 1924.

Named Monongahela, the vessel was completed at Coal Valley, Pa., and was a sister boat to the City of Pittsburgh. The engines were rated at 1,400 hp., powered by steam from five return flue boilers. The compound condensing engines contained cylinders of 18 and 36 inches with a stroke of 8.6 feet. The sternwheel was 26.5 feet in diameter with 16 buckets having a dip of 38 inches.

The pitmans that connected the paddlewheel to the reciprocating engines were named “Colonel Charles A. Lindbergh” and “Spirit of St. Louis.” Ownership of the boat was changed to the newly formed Ohio Barge Line in January 1941. The original officers included Capt. John Hottell, master; Capt. William Timmons, pilot; William Herd, chief engineer; and Rolla Rodgers, mate.

Capt. Henry Holloway, who was a frequent pilot on the boat, was stricken with a heart attack at Ohio River Lock 23 in 1942 and died several days later. Ironically, he was the son of Capt. Peter Holloway, a well-known steamboatman who died of heart failure while fishing from his skiff in the Kanawha River some 18 years prior. Capt. Hottell and New Albany riverman/funeral director Paul Seabrook (1897–1989) were good friends and visited frequently.

The Monongahela was completely rebuilt by Dravo Corporation at its Neville Island yard during the winter of 1945–46, at which time the boat received a new hull, and the boilers were converted from coal-burning to oil. The sternwheel was replaced and was constructed, with the exception of the wooden buckets, entirely of steel. When the new paddlewheel was being lifted into place August 5, 1946, the crane operator had the wheel positioned within 10 feet of its final destination when it fell. Luckily, no one was injured, and the shaft dropped, plumb, into its bearings on both sides of the fantail with no damage. What sighs of relief amongst the safe shipyard workers there must have been!

In April 1954, while downbound on the Monongahela River at Pittsburgh, the barges took a nose dive, the towboat ran over them and sank over the top of the barges. Several empty barges were immediately brought to the scene, and the vessel was lifted from its precarious position. After repairs, the towboat continued in operation with one of its final trips being from Pittsburgh to New Orleans.

Retired in 1955, the Monongahela was sold in 1957 to the McDonough Construction Company at Parkersburg, W.Va. The large pilotwheel was removed and donated to the Sons & Daughters of Pioneer Rivermen for display in the river museum at Marietta, Ohio. One of the pilothouse nameboards for many years was owned by Larry Geisler, proprietor of the Valley Boat Docks, and displayed at his riverfront home at Duffy, Ohio.

The partially dismantled towboat was eventually sold to a South American company. During the delivery trip the riverboat broke loose from the tug and was beached on the shore of Cuba.