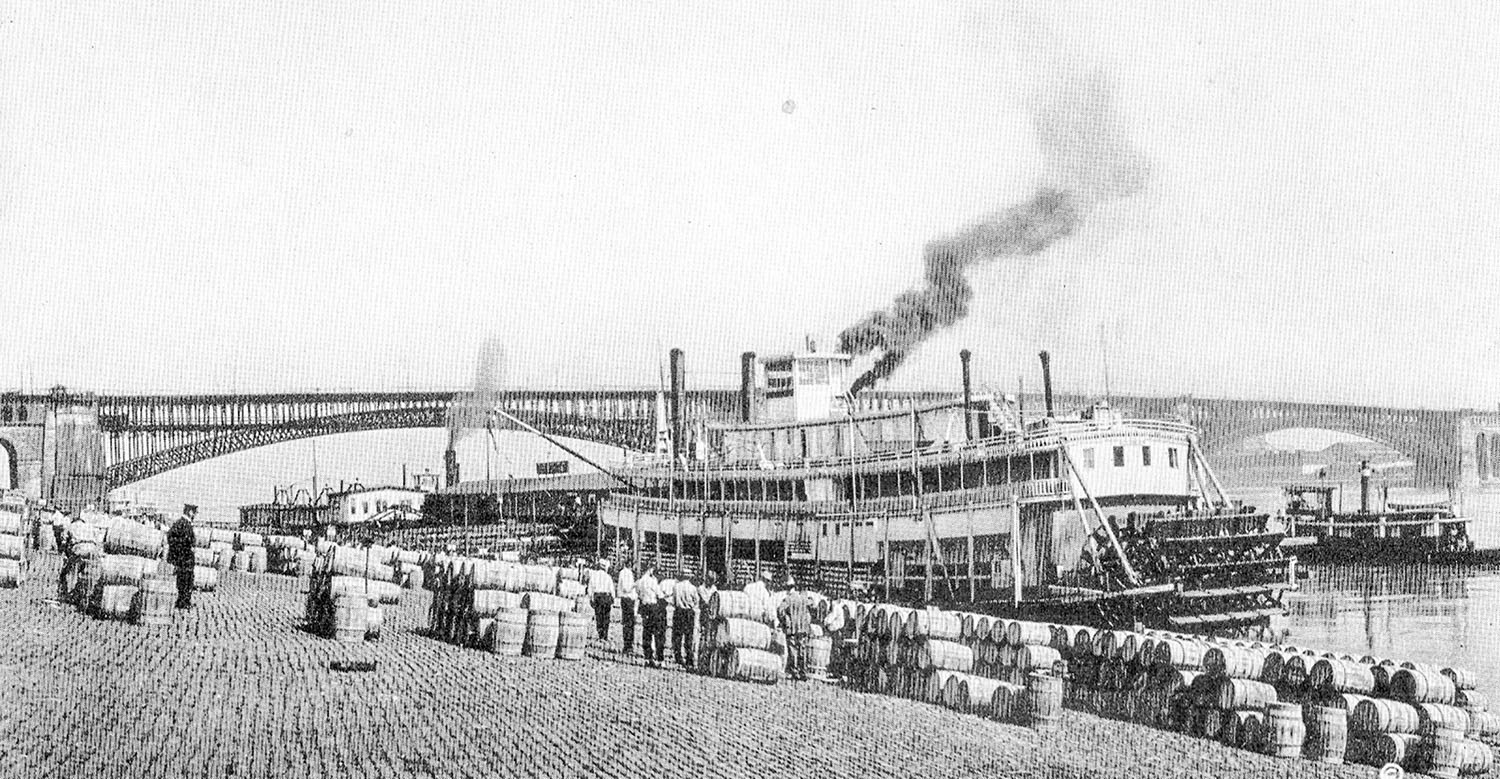 Originally named Mary S. Blees, the handsome sternwheeler Piasa was built in 1899 at Mobile, Ala., on a wooden hull that measured 170 feet in length by 34 feet in width, with a depth of 4.6 feet. The engines had 16-inch cylinders with a 7-foot stroke.

The riverboat ran in the Mobile-Tombigbee River trade until broker John Klein took the boat to New Orleans, where it operated in the run to Baton Rouge during the autumn of 1914.

In early June 1915, the vessel was sold to William Ruprecht of St. Louis, who carried out various alterations, including removal of the cotton guards. With Capt. Milt Harry as master, the Blees operated between St. Louis and Beardstown, on the Illinois River, competing with the Eagle Packet Company. To acquire an auxiliary boat and to eliminate the competition, the steamboat was purchased in early 1917 by the Eagle Packet Company and renamed Piasa to pay tribute to an Indian tribe.

According to Capt. Roy L. Barkhau (1904–1976), longtime circulation manager of The Waterways Journal and author of a booklet on the history of the Eagle Packet Company, after ice destroyed the majority of the Eagle Packet Company fleet at Paducah in 1918, the Piasa and Bald Eagle, which had safely wintered at St. Louis, were the sole survivors of the company left to operate during the 1918 season. The Piasa ran between St. Louis and Peoria until replaced by the Golden Eagle, formerly the cotton packet Wm. Garig, which the Leyhe brothers purchased in March of 1918. The Piasa then operated in the St. Louis–Alton trade until 1927; it was the last boat to regularly make the run.

Owing to public indifference and lack of patronage, the Piasa was withdrawn and laid up. The mothballed boat was occasionally utilized for special cruises and short excursions; later it was operated in various trades and was contracted as a towboat to move a dredge on the Missouri River.

The Piasa was retired and partially dismantled at St Louis in 1934. For some years the deteriorating derelict, sans sternwheel and smokestacks, lay moored behind the Eagle Packet Company wharfboat at the St. Louis levee.

River historian and museum curator Ruth Ferris (1897–1993) regaled this writer with remembrances of making several trips to the waterfront to obtain souvenirs, with the kind permission of Capt. Buck Leyhe, who was noted for his magnanimous generosity to young steamboat enthusiasts. Ferris recalled with laughter climbing up to extricate finials from the ornamental wooden arches in the second-deck cabin. One of those retrieved relics today is in my collection.

Towboatman Capt. Aubrey Haynes, who served as operations manager for Mississippi Valley Barge Line, also acquired numerous parts of the Piasa for display in his home at a farm near Mound City, Ill.

The remains of the riverboat were ultimately scrapped and burned at the St. Louis wharf.

In this week’s image, the steam propeller tug Colorado is visible behind the Piasa. Built in 1903 as the Archie Parker, it was later renamed Ella St. Clair. During the 1920s, under ownership of the Eagle Packet Company, the name was changed to Colorado. The tug, used for various harbor operations, was eventually dismantled at St. Louis.