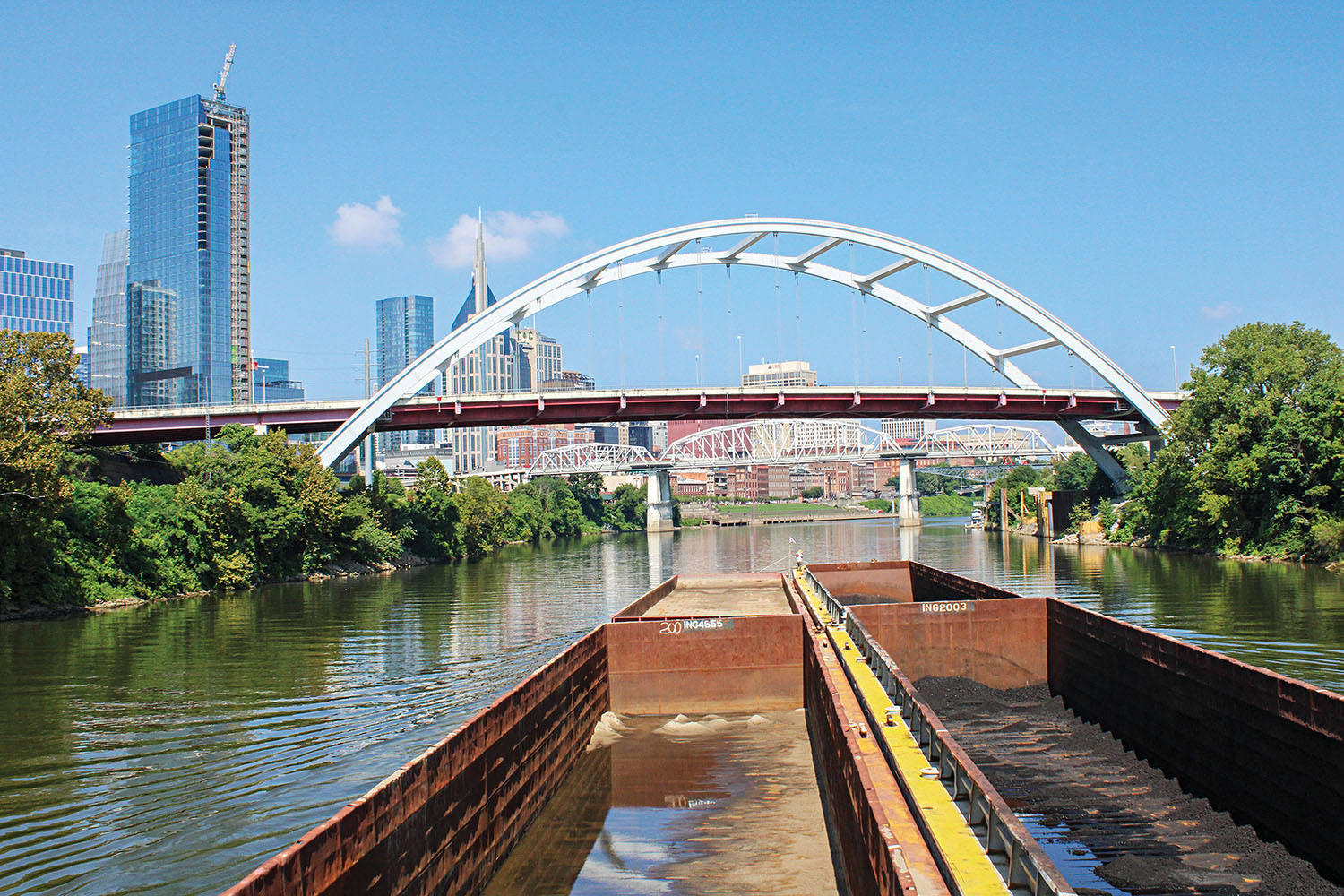 Reporters got a chance to ride a towboat, visit a lock and meet with industry professionals while learning about the importance of infrastructure along America’s inland waterways during Waterways Council Inc.’s (WCI) media tour August 23-24 in Nashville, Tenn., and Paducah, Ky.

The annual tour provides media professionals from around the country a chance to learn more about the industry, according to Deb Calhoun, WCI senior vice president. She noted that as barges don’t carry commodities along the Potomac River near Washington, D.C., those D.C.-based reporters who typically write about policy matters may have little experience understanding the inland waterways industry. For those who write about the industry more frequently, the tour was an opportunity to see the work from the front lines instead of from an office or boardroom.

WCI’s mission is to be the national unifying association of America’s numerous ports and inland navigation infrastructure interests, serving as the definitive spokesperson for public policy concerning the inland waterways system in Washington, D.C., and around the country, Calhoun said.

Specifically, WCI works to ensure an optimal level of federal support and funding for the planning, construction, operations and maintenance of port and inland waterways navigation improvements; to lead efforts to build an understanding among key policymakers, public opinion leaders and all waterways beneficiaries of the economic, environmental and quality of life benefits to the nation of a modern and well-maintained system of ports and inland waterways infrastructure; and to work with opinion leaders and key policymakers, particularly those within Congress and the executive branch, on critical issues affecting the future of America’s ports and inland waterways navigation system.

Getting A Look Up Close

Although coal volumes have generally decreased as power production transitions to cleaner-burning fuels, there is still plenty of coal to move, and the industry is bouncing back from the COVID-19 pandemic, said David Edgin, Ingram’s senior manager of motor vessel operations.

“We never stopped moving commodities,” he said. “It was just the volume.”

Edgin also spoke about the difficulties of aging river infrastructure, including locks and dams.

“Those dams were built in the 1950s or ’60s, so they’re starting to show their age,” he explained, stressing how the small, antiquated locks require vessels to break tows in half and complete double lockings to pass through them, costing both time and money.

Calhoun noted that 15 barges can carry the equivalent of 1,050 trucks or 216 rail cars with six locomotives. There also continues to be capacity on the inland waterways, while highways are becoming more crowded, and the nation faces a truck driver shortage. One barge can carry the load of 70 tractor-trailer rigs, she said.

Moving cargoes on the inland waterways continues to be the safest, most cost-effective and most environmentally friendly mode of transportation, Calhoun said. However, without needed improvements to infrastructure, the United States could face future impediments in the form of losing its competitiveness to other countries that are heavily investing in their waterways to provide more cost-effective exports. While grain is one of the largest exports from the United States to around the world, she said, other countries, including those in grain rich South America, are beginning to catch up.

Edgin said the lock and dam system in the United States has all too often been an afterthought, although he appreciates how the industry, Corps of Engineers and groups like WCI have been working to bring attention to the matter.

“One of the biggest bottlenecks in the system is Kentucky Lock, and that’s why they’re building the new lock there,” Edgin said.

Six journalists toured the Kentucky Lock Addition Project, receiving a safety briefing from the Corps of Engineers before donning their high-visibility vests. They watched as a Coast Guard buoy tender locked from Kentucky Lake into the Tennessee River through the existing 600-foot chamber and a commercial towboat and its barges waited to be next in line. They also saw heavy equipment moving behind the cofferdam where the new, 1,200-foot auxiliary chamber is about halfway through being excavated.

A dinner with towing company executives at Doe’s Eat Place in Paducah provided an opportunity for media to ask questions as well as to hear industry perspectives on a wide range of topics.

Dustin Davidson, WCI’s director of government relations, talked about the infrastructure bill, which has passed in the Senate and is awaiting the House to take it up no later than September 27 as part of a deal reached within the last week that coupled the bill with a $3.5 trillion budget framework.

As passed 69-30 August 10 in the Senate, the Infrastructure Investment and Jobs Act (H.R. 3684) provides $2.5 billion for the Corps to use on construction of inland waterways projects.

This is direct federal funding, not cost-shared with the Inland Waterways Trust Fund and not part of what is contained in the annual appropriations bill. Although it is not clear how that money is to be allocated among priority navigation projects until the Corps develops and submits a project-specific work plan no later than 60 days after enactment of the infrastructure bill, it would likely be enough to move forward on the 15 priority projects included in the Corps’ Capital Investment Strategy, as endorsed by the Inland Waterways Users Board, Davidson said.

Congress has already authorized 15 major projects along the waterways that have not yet been fully constructed, a current backlog of $7 billion, he said.

This infrastructure bill funding, combined with full and efficient annual appropriations for inland waterways projects’ construction, would mean more than $4 billion over the next five years for priority construction and major rehabilitation projects.  Additionally, $4 billion was provided in the infrastructure bill for the Corps’ Operations and Maintenance (O&M) account, with dredging and other inland waterways O&M projects eligible to compete for funding to be allocated in the work plan.

For context, the last significant infrastructure funding package, the American Recovery and Reinvestment Act of 2009, provided very little to the inland waterways, although it did include a $37.1 million in flood risk damage reduction and navigation projects, Calhoun said.

Along with the infrastructure bill, WCI has also taken a close interest in other legislation that is likely to affect the inland waterways community.

On August 4, the Senate Appropriations Committee passed the FY22 Energy & Water Development Appropriations Bill (S. 2605) that funds the Corps’ Civil Works Program. Overall funding was $8.96 billion, an increase of $1.165 billion above the FY21 enacted level and $2.168 billion above President Joe Biden’s budget request. The full House of Representatives passed its FY22 E&WD appropriations bill on July 29 and funded the Corps budget at $8.66 billion.

For the eighth consecutive year, full use of estimated annual revenues from the Inland Waterways Trust Fund was approved by Senate appropriators, a WCI priority.  The Senate’s IWTF project funding level was roughly $200 million higher than the president’s request and $100 million higher than the House-passed bill. More than $350 million in construction of IWTF-funded projects is provided in the Senate committee-approved bill.

New starts were approved for the Three Rivers project on the McClellan-Kerr Arkansas River Navigation System (MKARNS) at $149 million and the Navigation and Ecosystem Sustainability Program (NESP) through congressionally directed spending (formerly earmarks) at $45.1 million, double what the House provided. The Three Rivers project will allow the Corps deepen the MKARNS navigation system’s channel from 9 feet to 12 feet to increase barge payloads, as well as address a related issue in southeast Arkansas near the confluence of the Arkansas, White and Mississippi rivers. NESP deals with major rehabilitation of locks on the Upper Mississippi as well as the Illinois Waterway.

The Three Rivers project was granted a one-year 28 percent IWTF/72 percent general revenue cost-share for FY22, while the others remain at the 65 percent/35 percent cost-share that was approved last year in the Water Resources & Development Act (WRDA) of 2020.

The Operations and Maintenance (O&M) account was funded at $4.683 billion, an increase of $833.1 million above the FY21 appropriation amount and $554 million above the administration’s FY22 budget request.  Six major rehabilitation reports were funded to completion, receiving a total of $13 million to position those projects to become construction-eligible more quickly. The Investigations account was funded at $153 million, with nearly $7 million in pre-construction engineering and design for the Gulf Intracoastal Waterways’ Brazos River Floodgates and Colorado River Locks project. Harbor Maintenance Trust Fund (HMTF) projects are to receive an estimated $2.05 billion, the highest request to date.

It is unlikely that the appropriations package will make it to the Senate floor before the end of the fiscal year on September 30, Calhoun said, making a continuing resolution to fund all 12 appropriations bills a near certainty.

Breaking It All Down

Bruce McGinnis, CEO of McNational Inc., was characteristically candid as he explained, in a nutshell, the importance of addressing infrastructure to industry, whether through NESP, other specific appropriations, the biennial Water Resources Development Act, grant programs or a separate infrastructure bill.

“The point is we’re trying to keep the rivers dredged out and the locks repaired and open,” he said.

Darin Adrian, executive vice president of Marquette Transportation Company’s river division, said the locks and dams on the system were sufficient at the time they were built.

“Our grandfathers and great grandfathers built a great system in the 1930s and 1940s, but it needs work,” he said.

The repairs and new construction are necessary not only to improve safety but to improve efficiency. Delays at antiquated locks can cost an average tow $500 per hour, the Corps noted in its briefing at Kentucky Lock.

Adrian and other industry executives also underscored that commercial towing operators pay a 29-cent-per-gallon tax on diesel fuel, which is deposited in the Inland Waterways Trust Fund to pay for a sizeable portion of new construction starts and major rehabilitation projects on the system. Other users—including those who receive hydropower or industrial water or recreational users—pay nothing to use or to modernize the system, so industry is already paying its fair share and should not be faced with additional user fees, they said. Additionally, Adrian noted, such fees would force some cargoes off the river system and onto other, already crowded, modes of transportation.

Calhoun likes that this infrastructure bill, unlike the proposal from the previous president’s administration, does not call for those fees or for tolls at locks.

“There was a different approach this time, and that was direct federal investment, and that’s what needs to be done,” Calhoun said.

Barry Gipson, executive vice president of James Marine Inc., talked about how delays, including unscheduled lock closures as old equipment fails, affect prices that are ultimately passed along to consumers.

“It affects every person in this country if you think about it,” he said.

Moving Into The Future

The executives also spoke about the importance of growing the inland marine workforce through both retention and on-boarding new hires. While the industry still has some employees who have worked in the business for generations, those are fewer, said Oscar Harrell, vice president of operations at Ingram Barge Company.

“You can’t build a tow inside,” Harrell said.

The industry largely has recruited from the farming community previously, and fewer people farm today, he said.

Harrell and the other leaders also discussed the varied effectiveness of sign-on bonuses, retention incentives, paid training for career advancement and holding open interviews in some rural communities with traditional ties to the river.

They also talked about moving new commodities, with mixed opinions on the likelihood of widespread implementation of container-on-barge services, and more positive opinions on the emergence of diesel transport by barge as pipelines reach capacity, as witnessed in the Nashville area.

Rob McCune, vice president-sales and customer service for Crounse Corporation, said coal deliveries are up about 20 percent year over year compared to last year, and that the highway construction rebound this year has also led to their aggregates and limestone business picking back up.

Additionally, Adrian said, corn and soybean crops across the country are thriving, with forecasts calling for one of the best harvest seasons in recent years.