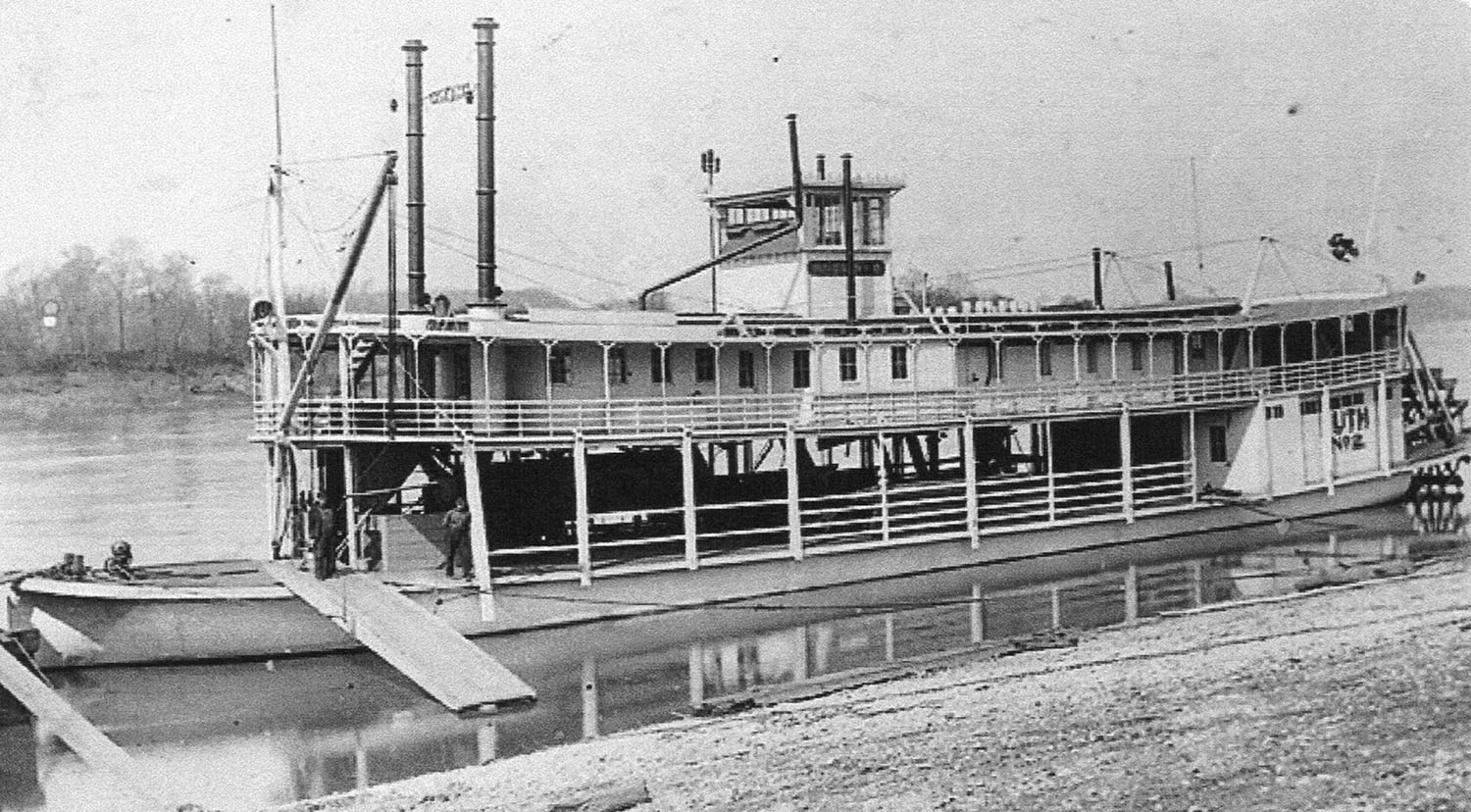 The Steamer Ruth No. 2

The Mozena Brothers’ boat yard, owned by Marshall and Henry Mozena at Clarington, Ohio, was well-known for constructing many of the most successful sternwheel packets operating on the Ohio River.The original Ruth, which operated for the Bay Line of Ironton, Ohio, was renowned for its speed and had provided such reliable service that a decision was made to name a new boat Ruth No. 2, to honor the name but distinguish it from the original one, which continued in service. Built in 1904 on a wooden hull measuring 136 feet in length by 26 feet in width, the riverboat had one boiler that supplied steam to cross-compound engines having cylinders of 10 and 16 inches in diameter with a 6-foot stroke.

According to the late J. Mack Gamble, longtime Upper Ohio River correspondent for The Waterways Journal, the Ruth No. 2 embodied the qualities most desired in a steamboat of that time period; the boat was fast, of light draft and an exceptionally good handler.

The vessel first operated, with Capt. Michael Davis as master and Charles Higgs as chief engineer, in the Sistersville–Wheeling trade, a 95-mile round trip made in daylight that allowed passengers several hours of shopping time during the layover at Wheeling.

In 1906, Capt. E.L. Magruder was searching for another boat to augment the fleet of packets operating for the Callahan Line in Georgia. Magruder purchased the Ruth No. 2 at Ironton and took it to the Howard Shipyards at Jeffersonville, Ind., where eight additional staterooms were constructed in the boat’s cabin. Larger smokestacks were installed, and some changes were made to the machinery.

The sternwheeler was taken down the Ohio and Mississippi, running only in daylight. At New Orleans, a coast pilot came aboard to make the trip across the Gulf of Mexico, and this was accomplished without incident. The Ruth No. 2 had a texas added for additional rooms and then began operating on the Apalachicola and Flint rivers: a distance of 172 miles between Bainbridge, Ga., and Apalachicola, Fla.

In July 1913, the boat was sold to the Columbia Railway & Navigation Company and moved to Georgetown, S.C., to serve on the Santee and Congaree rivers. Capt. Magruder and the same courageous crew that had brought the boat from the Ohio River to Georgia again were called upon to take the steamboat around the Florida Keys. During the trip a stop was made at Miami to make boiler repairs due to the effect of using salt water.

By 1914, various problems, including two accidents and World War I, caused the Columbia Railway & Navigation Company to cease operations. The colorful career of the Ruth No. 2 came to an end in 1918 at Columbia, S.C. While on an improvised drydock for repairs, a severe storm blew the riverboat across a ravine, leaving it high and dry and totally wrecking the vessel. The salvaged machinery was sold and recycled for use on a freight boat operating on the North Carolina coast. The melodious whistle went to the Weston & Brooker Quarries, and the roof bell was utilized by the Giugnard Brick Works, both at Columbia.

Caption for photo: The slim and trim sternwheeler Ruth No. 2 at a landing. (Keith Norrington collection)