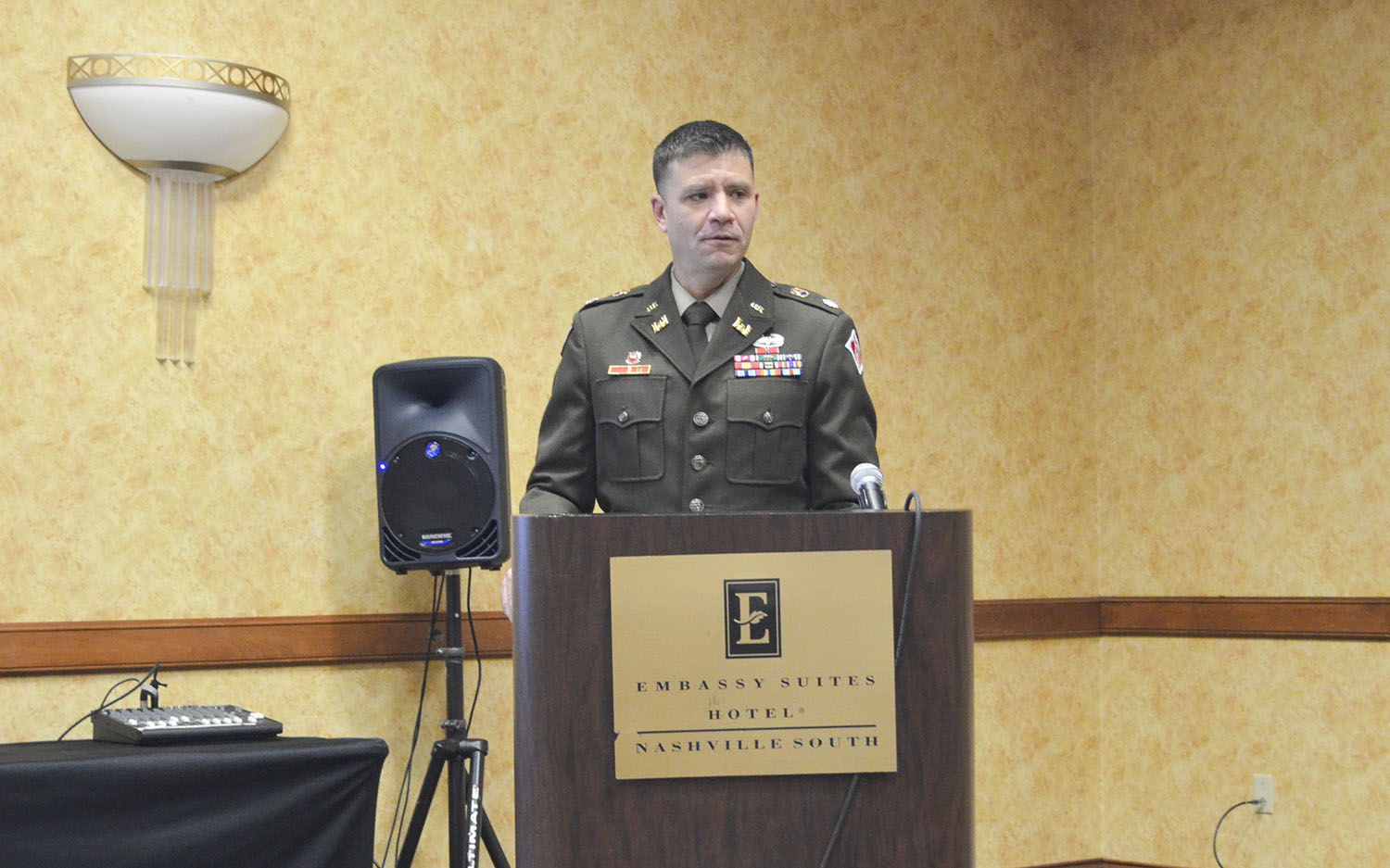 “It was a big deal to finally get everybody back together and meet all of the new folks,” he said following the conference.

He noted that the in-person format also allowed a chance for informal networking that proved helpful.

As Hurricane Ida tore through the Gulf region in late August, a remnant passed over portions of Tennessee and Alabama. At the same time, a 600-foot floating approach wall at Wilson Dam on the Tennessee River in northwest Alabama sank and was later found by side-scan sonar in 75 feet of water. For now, commercial vessels transiting the lock are doing so via a process that requires a helper boat and breaking apart tows, creating inefficiencies.

A similar floating approach wall exists at the Guntersville Dam, which transits about 5 million tons of cargoes annually, as opposed to Wilson’s 10 million tons. The industry representatives suggested moving the wall to increase overall efficiency.

“It got those folks face to face in a very informal environment to get together and speak frankly,” Jones said.

Other highlights of the conference included several informative sessions.

Sahl noted that the district is responsible for 14 navigation lock projects, with nine of those on the Tennessee River, four on the Cumberland River and one on the Clinch River as well as 10 dams and 1,175 miles of navigable waterway. Roughly $7.9 billion in cargo moves through the district-maintained waterways annually.

Its nine hydroelectric power plants generate 3.3 billion kilowatt hours of electricity yearly, which amounts to 4.5 percent of the capacity of the Corps of Engineers as a whole, Sahl said in his presentation.

In addition, the district manages 78,690 acres for habitat, including four locations on the national register of historic places and more than 1,800 designated cultural sites. It operates 284 recreation areas with 3,195 campsites, 4,607 miles of shoreline, 244 miles of trail and 278 boat ramps. Visitors spend $705 million annually in these areas.

Walker provided an overview of the ongoing major construction/remediation projects at Chickamauga and Kentucky dams.

Repairs at Chickamauga Lock, where concrete growth has created cracking and has the potential to affect stability eventually, are the No. 4 priority of the Inland Waterways Trust fund. The total Chickamauga Lock Replacement Project cost estimate is $757 million (at the October 2019 price level) with $717.6 million funded through fiscal year 2021 and $336 million expended to date, making it 44 percent complete. It has an estimated project completion of between November 2025 and August 2027. It was authorized in the 2003 Energy and Water Appropriations Act and reauthorized in the America’s Water Infrastructure Act of 2018.

About 1 million tons transit the existing lock annually. Repairs are estimated to reduce transit time for commercial vessels and tows by 80 percent.

The project will enlarge the lock from 60 by 360 feet to 110 by 600 feet, allowing nine barges per lockage vs. the current one barge.

Concrete placements are 26 percent complete, Walker said during his presentation. The project requires 248,000 cubic yards of concrete to be placed. Although the lock chamber contract is ongoing, it is experiencing delays that have not yet been fully quantified, he said.

The Corps is focusing on kicking off its upstream approach wall contract this month. It was awarded September 9 with a value of $60.9 million. The contract is expected to be completed in January 2024. The approach walls and decommissioning contract award is scheduled for March 2023. The site restoration award is expected in September 2025.

The Kentucky Lock Addition Project is the No. 3 project for the Inland Waterways Trust Fund. It is 46 percent complete with an estimated completion date in 2025, Walker said. The total project cost is $1.229 billion with $763.8 million received to date. It is fully funded as of fiscal year 2020. Between 30 million and 35 million tons of cargoes transited the existing lock annually from 2013 through 2019.

The project maintains the existing 600-foot chamber and adds a 1,200-foot chamber. Lock capacity will nearly double, from nine barges to 15, Walker said. Wait times currently averaging 8 to 12 hours should reduce to nearly nonexistent levels with the additional chamber is complete, Walker said.

Key events in the project over the last year have included the completion of the downstream cofferdam contract in March at the cost of $67.1 million and progress on the downstream lock excavation contract, which is due to be completed in July 2022.

Work is ongoing for the downstream lock monoliths contract, awarded September 20 to Thalle Construction. The $380 million total contract price has a 67-month duration and was a major milestone for the project, Walker said.

Walker noted that the Inland Waterways Trust Fund cost share changes in WRDA 2020 were key for both projects. The legislation changed the cost share for all projects to 65 percent general fund and 35 percent Inland Waterways Trust Fund for 10 years. The 2020 Capital Investment Strategy prioritizes funding for IWTF projects with ongoing construction, currently only the Kentucky and Chickamauga projects.

Johnson discussed completed and planned lock maintenance along the Tennessee and Cumberland rivers.

The inland waterways advocacy organization would like to see at least $3 trillion in a comprehensive infrastructure package, “maximum use” of the Inland Waterways Trust Fund and no new fees for inland waterways operators or shippers.

Appropriations asks included: achieving fiscal year 2022 Energy and Water Development appropriations of the full amount supportable by diesel fuel tax receipts deposited into the Inland Waterways Trust Fund (IWTF); implementation of the cost-share adjustment made in the Water Resources and Development Act (WRDA) 2020 of 65 percent general revenues and 35 percent IWTF; and obtaining two new construction starts for inland waterways modernization projects as recommended by the Inland Waterways Users Board. Those would be Upper Mississippi Lock and Dam 25 and the Three Rivers project on the McClellan-Kerr Arkansas River Navigation System (MKARNS).

Paul Griffin, executive director of the national non-profit Energy Fairness, updated participants on federal legislation with his session, “What’s Going On In D.C.?”

He noted that the organization has been active nationwide in discussions affecting electricity prices and reliability.

“Energy Fairness believes climate change is real and must be addressed through innovation and smart policy,” Griffin said as part of his PowerPoint presentation.

However, he said that it was important not to just focus on environmental impacts but also economic realities.

“As we pursue solutions to climate change, we must also keep an eye on the affordability, reliability and resiliency of energy,” he said.

Griffin explained the congressional budget reconciliation process and discussed energy provisions in the reconciliation bill. A key item to watch will be how much below the $3.5 trillion House spending package is acceptable to both moderate and progressive wings of the Democratic party.

In the original bill, as proposed, energy accounted for $486.5 billion of the $3.5 trillion proposal. Of that, $150 billion is for a clean energy performance program that would increase clean energy delivered to 4 percent annually and achieve 80 percent clean electricity by 2030.

Miguel Moravec, a doctoral student from Vanderbilt University’s Center for Transportation and Operational Resiliency (VECTOR) spoke to the conference about their ongoing case study titled “Cumberland/Tennessee Inland Waterway Resilience Analysis” in support of the Department of Homeland Security/Corps of Engineers Port Resilience Guide.

The state of Tennessee has five public ports, and portions of the Tennessee, Mississippi and Cumberland rivers run throughout the state.

The top inland waterways commodities to the state by value are gasoline at $1.3 billion, fuel oils at $1.2 billion and transportation equipment, including railcars, aircraft and commercial ships, at $857.7 million, comprising 65 percent of the total value.

In total, the study has found that in 2018, 30.8 million tons of freight valued at $5.2 billion more moved on Tennessee’s inland waterways, the equivalent of 770,000 trucks. That, in turn, reduced congestion, emissions and crashes, lessening impact on highway infrastructure.

One key research question in the study is: “Can we identify ports/docks/terminals that transfer cargoes to/from other modes to provide redundancy in the face of disruption and provide system redundancy?”

The study has also looked at identifying the impacts of natural hazard events on inland waterway system operation and delivery of commodities and whether the inland waterway system can ensure petroleum product supply to middle and east Tennessee if the Colonial Pipeline’s flow is disrupted. It analyzed the effects of the 2016 pipeline explosion closure, the 2017 closure due to Hurricane Harvey and the ransomware attack that caused the pipeline’s closure earlier this year.

Since 2012, the river system has delivered refined petroleum that has supplemented the Colonial Pipeline in the Nashville market. The case study measured how the inland waterways system helped mute the impact of the closures, using gasoline data from the Gas Buddy website to compare gas prices in Tennessee markets with inland waterway access vs. those that did not have access. It determined that during the most recent closure, supply disruption in the Nashville market was much lower than reported in other markets.

While still gathering additional information form stakeholders, when complete, study recommendations could include expanding the Chattanooga and Knoxville terminals to accept fuel barges, increasing traffic on the Tombigbee River to protect from impacts of an earthquake impacting the Mississippi River or a pipeline closure, updating building codes to improve existing infrastructure in advance of any natural disaster and increasingly relying on resilient, alternate energy sources and vehicles.