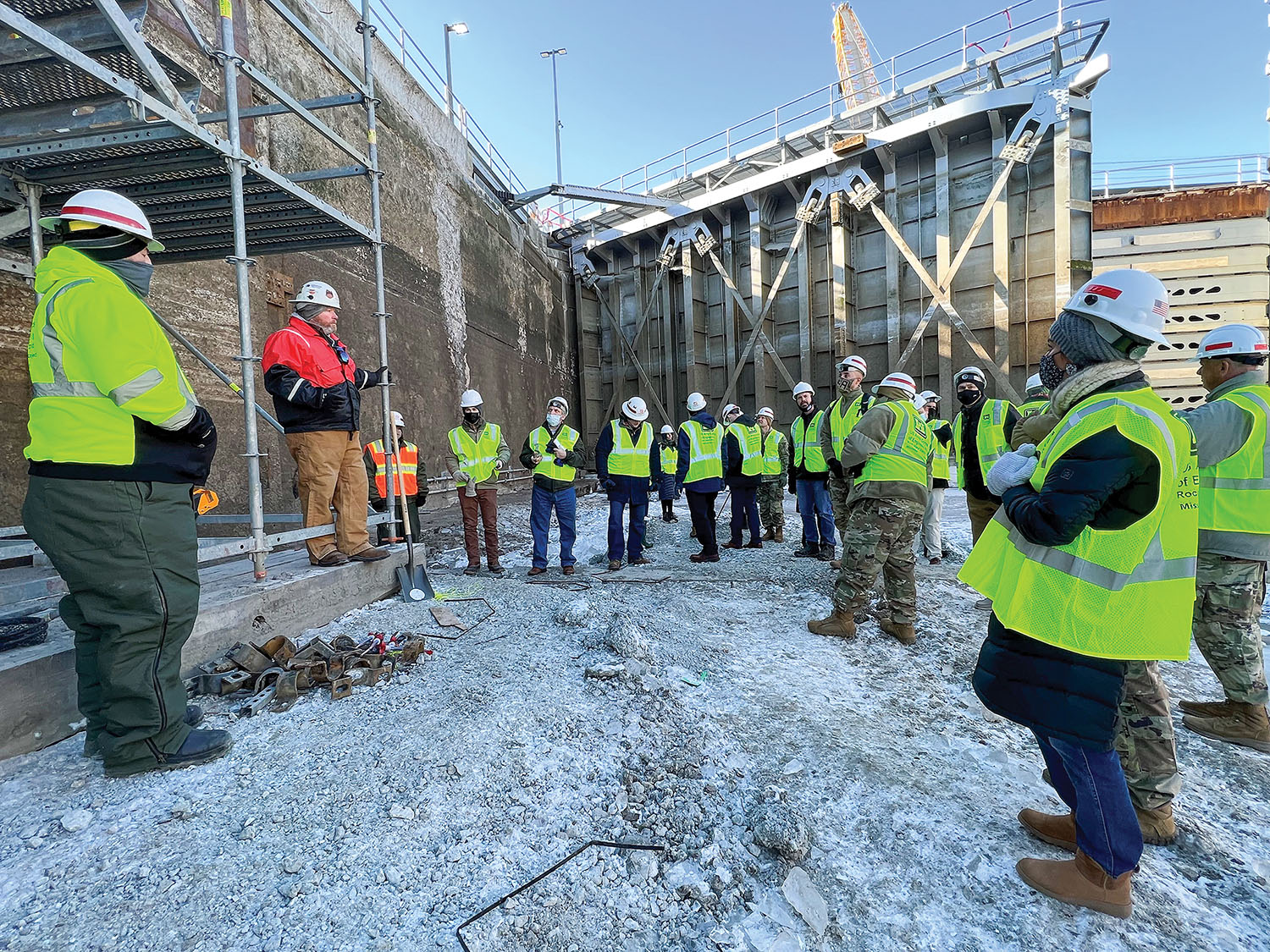 Federal and local elected officials from Iowa and Illinois, media and guests got the rare opportunity to stand on Mississippi River bedrock and see (and, for some, crawl into) the inner workings of Upper Mississippi River Lock 15 in Rock Island, Ill. Three sessions on January 26 and 27 afforded the rare view amid frigid temperatures and high spirits, in the wake of the announcement of the Corps FY 2023 work plan under the Infrastructure Investment and Jobs Act (IIJA), released on January 19.

“Dewatering is one of the only times we can actually visually see what’s going on below the water line,” said Matt Thurman, chief of the maintenance section for the Rock Island Engineer District’s Mississippi River Project. “Once the chamber is dewatered, our teams of engineers and professionals inspect the entire site just to see how things are performing.”

Gate and concrete inspection are already underway. Bubbler pipes will be replaced to ensure unimpeded gate movements. The entire project will take about six weeks. The nearly $4 million project is funded through the Corps’ operations and maintenance account.

Lawmakers had the opportunity to see first-hand the infrastructure they’ve been addressing, both through funding made available in IIJA and the annual appropriations process. For most of the participating legislators, lock infrastructure is a topic their constituents continually remind them about. The unique perspective of river bottom, however, garnered attention.

“This is the third time I’ve been able to tour one of the locks along the Mississippi River,” said Rep. Mariannette Miller-Meeks (R-Iowa). “It’s critically important we maintain these locks and dams for navigation.

“It’s a great experience to be here at Lock and Dam 15, but next time I’m requesting they not have sub-zero weather,” she quipped.

The event also gave legislators and guests a chance to meet the men and women working on the project.

“These workers that operate every single day out here, they work 24/7, they work holidays, they work weekends,” said Col. Jess Curry, commander of the Rock Island District. “And that’s all designed to keep this critical infrastructure up and running.”

Lock 15 opened in 1934. This was the first dewatering of the lock since its rehabilitation in 1994–1995. Maintenance on Lock 15 is supposed to be complete, and the lock back in full operation, by March 1, in time for the start of the navigation season.

High school and college STEM students (those interested in science, technology, engineering and math) will get the opportunity to travel to the chamber bottom in early February.

Any member of the public can get an overhead view of the dewatered lock via the Mississippi River Visitor Center at the Rock Island Arsenal. The visitor center is open Tuesday through Saturday, 9 a.m. to 5 p.m., and both the indoor area and outdoor observation deck offer fantastic views of the project.

That same week, the Navigation-Ecosystem Sustainability Program (NESP) was front and center at a press conference hosted by Sen. Dick Durbin (D-Ill.) and Rep. Cheri Bustos (D-Ill.) at Peoria Lock and Dam on the Illinois Waterway January 25.

Just a few days prior, the Corps’ IIJA work plan announcement included $829 million to complete construction of a new 1,200-foot lock chamber at Lock and Dam 25 on the Upper Mississippi River.

The historic moment was not lost on either legislator.

“Sen. Durbin got the language 15 years ago that set this up for funding so many years later,” Bustos said. “The monumental infrastructure package passed under the Biden administration is what is making this happen. If you want to look at a historical perspective, you have to go back to the Eisenhower administration to see this kind of investment. That was when we first developed the interstate highway system.”

“These are the equivalent of interstate highways, and these highways on the river haven’t been touched for years,” Durbin said. “Improving the capacity and efficiency of our locks will ensure inland navigation remains the lowest-cost and the lowest-carbon-producing transportation method for commodities. This is going to prevent increased transportation costs for American consumers and protect the critical supply chain.”

Durbin said modernization of the first of seven NESP locks authorized for 1,200-foot chambers “is a game-changer for farmers,” who transport more than 60 percent of the world’s agriculture exports via the river. He called the Illinois and Mississippi River system the nation’s “competitive advantage” in global trade. “It will allow Illinois agriculture to compete around the world.”

Marty Marr, a board member for the Illinois Corn Growers Association, joined Durbin in underscoring the importance of NESP to farmers.

Durbin was quick to point out agriculture isn’t the only beneficiary of the construction, noting, “And in the process we are going to create thousands of jobs.” He was joined by Gary Perinar, head of the Mid-America Carpenters Regional Council and Col. Jesse Curry, the Corps’ Rock Island District commander.

Del Wilkins, president of Illinois Marine Towing Inc., thanked the many stakeholders who worked over many years to make NESP possible. Taking a turn on a famous phrase by Gen. George S. Patton, Wilkins thanked Durbin and Bustos for their leadership, saying, “You either lead, follow or get out the way. Thank you for leading.”

Caption for top photo: Elected representatives, Corps officials, media and guests stand on the bottom of Lock 15 during a tour January 26. (Photo by Paul Rohde)