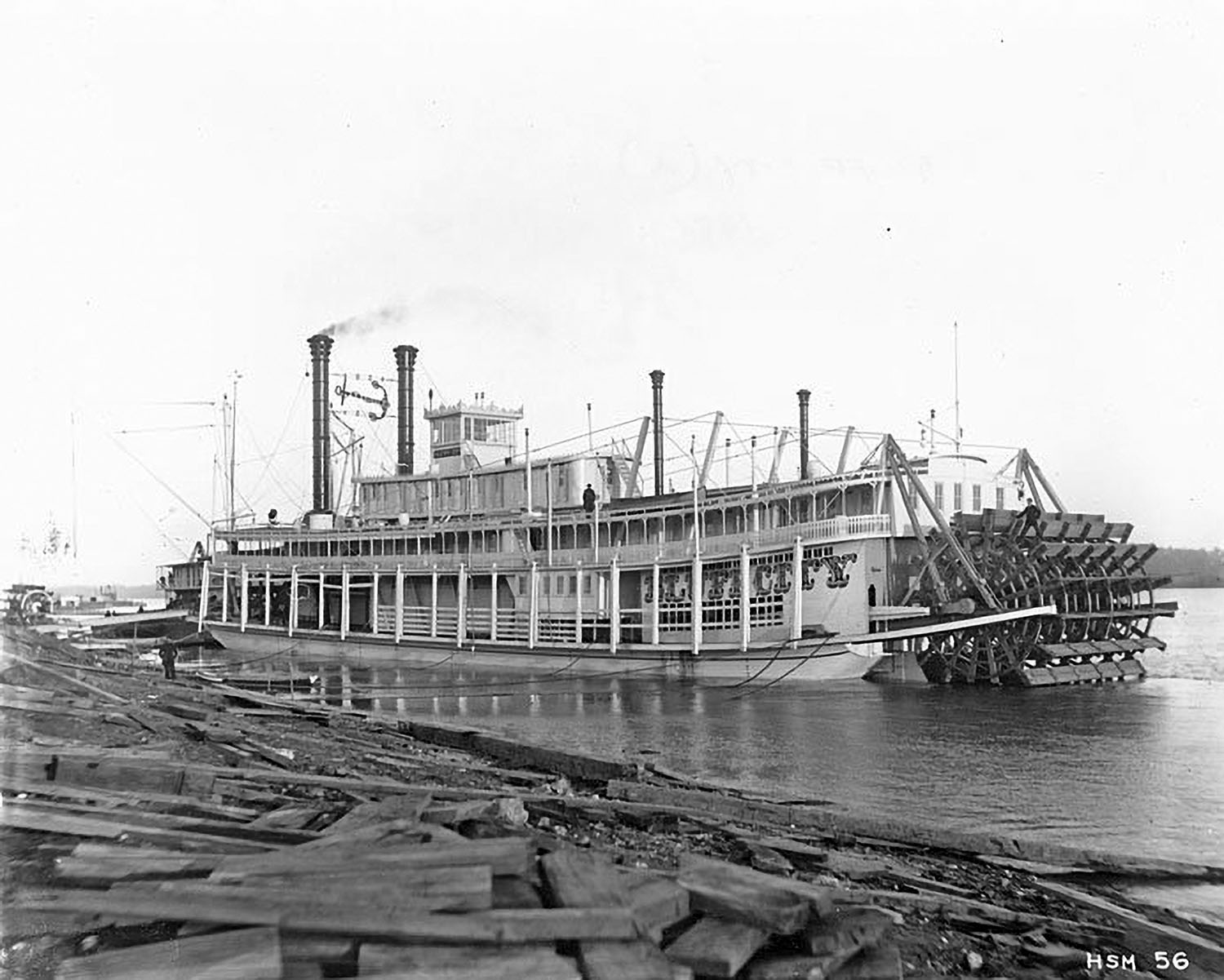 Of the many beautiful steamboats owned by the famed Anchor Line, all were sidewheelers except one. Built at a cost of $36,500 by the Howard Shipyard at Jeffersonville, Ind., in 1896, the wooden hull of the sternwheeler Bluff City measured 225 feet in length by 42 feet in width. Four boilers supplied steam to the engines that had 20-inch cylinders with an 8-foot stroke.

The original name for the boat was to be Austin Corbin, but just before the boat was launched it was decided to name it the Bluff City.

Capt. Dennis M. Connor was master with Capt. James Grasty and Capt. Theodore Hall in the pilothouse and Owen Cates, clerk. The handsome new boat, with the trademark anchor suspended between the smokestacks, ran in the St. Louis-New Orleans trade, the usual route of the Anchor Line steamboats.

On the morning of Wednesday, November 18, 1897, the Bluff City departed St. Louis with two loaded barges in tow, bound for New Orleans. When fire broke out in the engineroom, allegedly started by sparks falling into some cargo bags, the boat was landed at Chester, Ill., some 80 miles below St. Louis. The 40 passengers and crew members safely evacuated the blazing steamboat as it burned to the waterline. A newspaper account reported that many of the cabin passengers were yellow fever refugees, returning to their homes in Mobile, Ala. One of the barges was saved by being quickly cut loose and rescued by another boat.

The 1,000 tons of cargo included 200 bales of hay and 100 horses, many of which perished in the conflagration or drowned. The animals were owned by the Reynolds Construction Company and were destined for levee work on the Lower Mississippi. One eyewitness claimed to have seen a horse swim across the river to the Missouri side.

Noticing that the rapidly spreading flames were about to reach the powder magazine, Capt. Connor gave the order for all persons to clear the boat just moments before a horrific explosion occurred, breaking store windows in Chester. Groups of school children and their teachers thronged the waterfront to witness the spectacular conflagration and had just returned to their classrooms when the blast shook the town.

The doomed steamboat was barely a year old at the time of its demise and reportedly was insured for $35,000. Capt. John Bird, agent for the Anchor Line, assured customers that the company would have another boat operating in place of the Bluff City by the beginning of the succeeding week.

Now fast forward to the year 1976. With extremely low water stages along the Mississippi River and the Memphis gauge reading minus 3.5 feet, the skeletal timbers of the Bluff City became visible. News of the seldom-seen hull, buried beneath the muddy waters for nearly eight decades, made national newspaper and television headlines.

The publicity brought souvenir hunters to the site armed with tools to liberate pieces of charred timbers and square spikes from the exposed wreck. The excursion steamer Julia Belle Swain, bound from Peoria, Ill., to Chattanooga, Tenn., for winter quarters, was landed at Chester on an autumn afternoon to enable Capt. Dennis Trone and his crew to explore the remains of the riverboat.

Caption for top photo: The Bluff City as a new boat at the Howard Shipyard in 1896. (Keith Norrington collection)