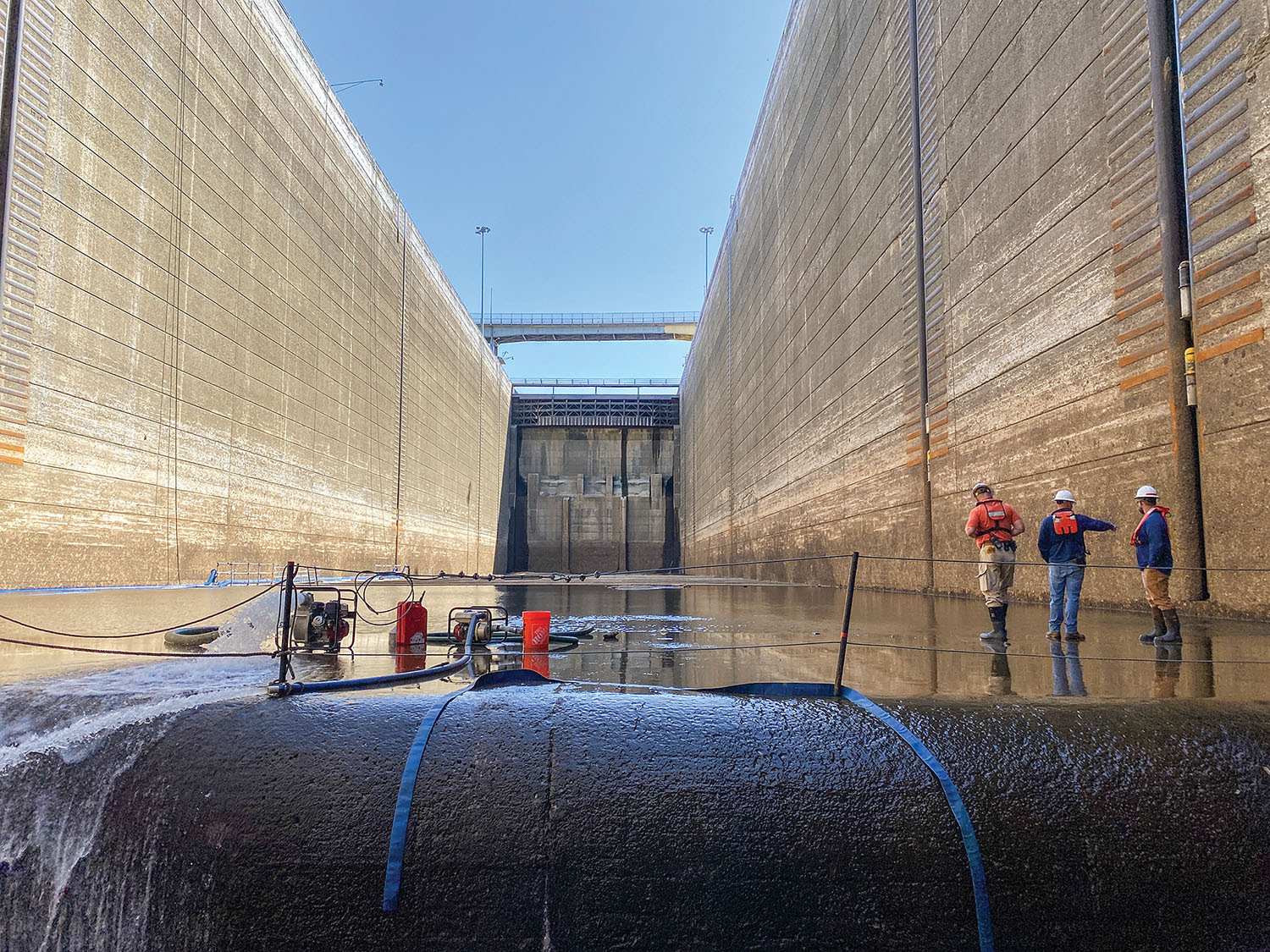 A maintenance team from the Corps of Engineers’ Great Lakes and Ohio River Division Regional Rivers Repair Fleet arrived March 24 to coordinate with the Wilson Lock staff on lock maintenance. To ensure the structural integrity of the lock, a periodic dewatering is required. In the dewatering, all the water in the main lock chamber is pumped out, exposing the chamber and its components. Dewatering allows maintenance crews to access machinery and components of the lock that are normally inaccessible.

The dewatering process requires a complete shutdown of the main lock for 30 days, requiring commercial vessels to pass through the smaller auxiliary lock and creating longer lockage times.

“A 30-day shutdown is better than a six month or longer shutdown because of a catastrophic failure of the lock or its components,” said Guntersville Lockmaster Ryan Johnson, who is volunteering to assist the team at Wilson.

The lock, located between Florence and Muscle Shoals in northern Alabama, is the highest single-lift lock east of the Rocky Mountains and was declared a National Historic Landmark in 1966. Its main chamber is 110 feet high and 600 feet long. The main and auxiliary locks allow commercial and recreational traffic to flow up and down the river, while the 16-mile, 15,500-acre lake formed by the Tennessee Valley Authority dam attracts tourism.

Because of its size, crews are using cranes and lifting devices to reach heights up to 125 feet. That requires numerous safety precautions, including hard hats, eye and hearing protection, harnesses for anything above 6 feet, and life jackets.

“Everything at Wilson is twice as big and twice as heavy,” Johnson said.

Dewatering and the subsequent inspection and maintenance also require a lot of preparation, coordination and effort. The Tennessee Valley Authority has a crew of painters available to remove any lead-based paint from the gates, removing hazards for maintenance crews. The Middle Tennessee River maintenance teams work on the valve systems, and Cumberland River mechanics and crane operators volunteer to assist maintenance operations.

Prior to dewatering, divers play a critical role.

“About a week before the actual dewatering process starts, we [hard hat divers] must inspect and make any needed repairs to the lock’s equalizing valves, ensuring water can actually get pumped out once we seal the upper chamber off,” said Josh Miles, Nashville District lock and dam equipment mechanic and surface supplied air diver.

Divers also assist with setting bulkheads on the upstream and downstream side to block the flow of water into the chamber so the water in the chamber can be pumped out, he said.

“Historically, dewatering at Wilson lock takes place every three years,” said Brian Brewer, assistant operations manager for the Middle Tennessee River. “However, due to many issues, seven years have passed since the last one.”

Lockmaster Clay Askew said the impact of the seven-year dewatering lapse is predictable.

“Since the last dewatering in 2015, we anticipate some predictable findings like cavitation in the concrete around the bulkheads,” he said. “Additionally, three of the four main filling and emptying valves are shifting, and we found some bad seals on the valves and machinery itself.”

For a structure that became operational in 1959, these findings are normal, he said, while also noting these issues are only discoverable through the dewatering process and that if the issues are not addressed, the valves could fail. The cavitation around the bulkheads, if not properly sealed, could prevent future dewaterings because the bulkheads, which prevent water flowing into the chamber, would not set securely in the bulkhead slots.

The inspection is scheduled to conclude the week of April 25, with the lock returning to complete functionality April 28.