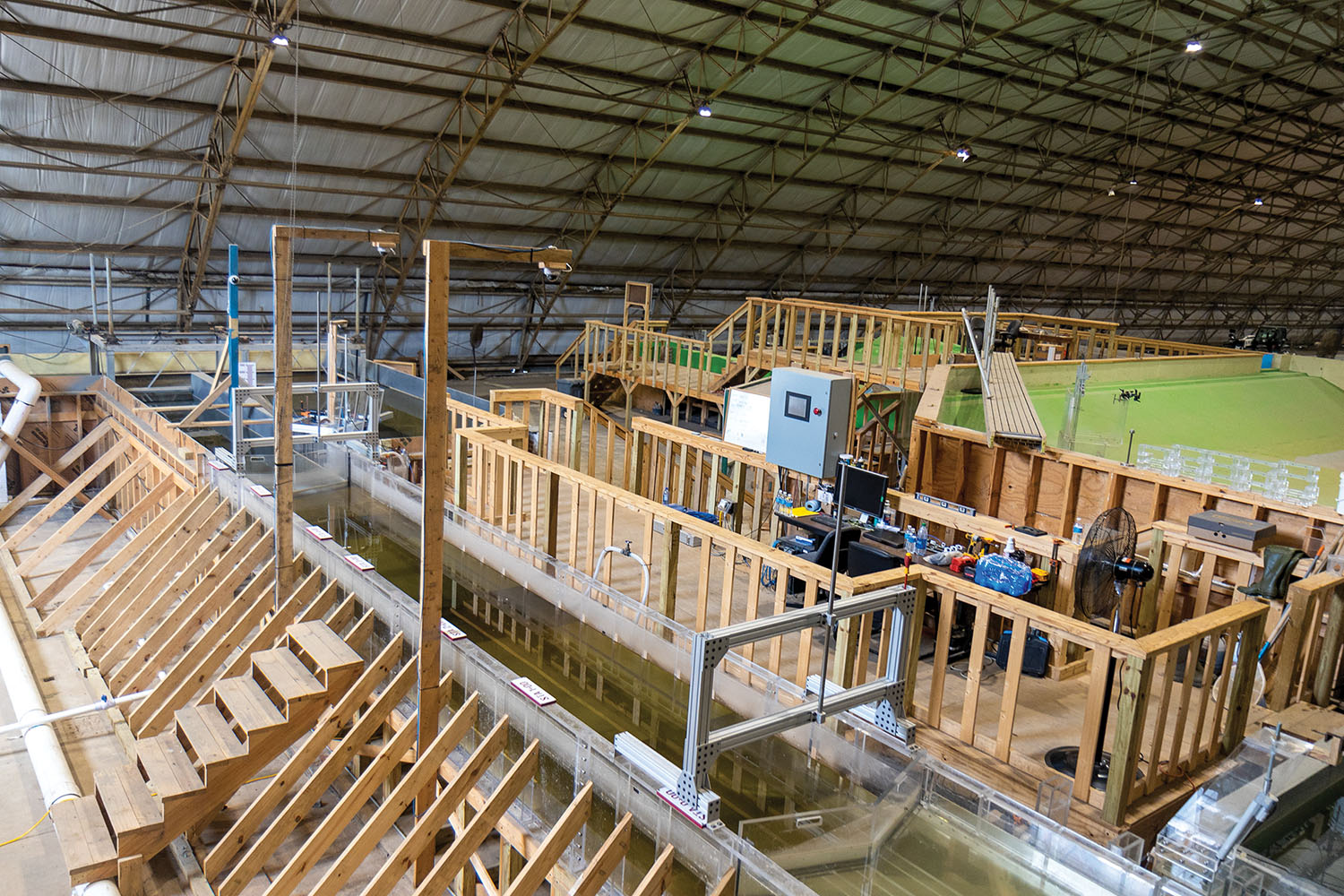 The U.S. Army Engineer Research and Development Center (ERDC) is making progress modeling new auxiliary locks to be constructed at the Montgomery, Emsworth and Dashields sites.

“We started on Montgomery with the full expectation that we’re going to be doing the same kind of studies for Emsworth and Dashields,” said Allen Hammack, research mechanical engineer for ERDC’s Coastal and Hydraulics Laboratory (CHL). “We began model design in October 2020 and started our initial testing in May 2021. We completed that late last year and began testing the current design in March. We should be done with that soon, and then we will move on to the other two locks.”

ERDC is partnering with the Pittsburgh Engineer District for a study focused on replacing the locks. Because the existing auxiliary locks are much smaller than the main locks, the research team is using both numerical and physical modeling to determine the best designs for larger replacements.

“Right now, everything looks good, and I think a lot of that good performance is based on the numerical modeling that Pittsburgh District did before we came to the physical models,” Hammack said. “They ran both a navigation model and a filling and emptying system model, and the numerical modeling helped answer some of the questions we had for the design.”

At ERDC, two physical models have been constructed to test the new designs as well—a navigation approach model and a filling and emptying system model. Everything was built on site except for a few specific commercially available instruments.

“The two models are inherently related,” Hammack said. “They both feed into the same overall lock design.”

The navigation approach model is a 1:100 scale model used to evaluate guard wall lengths in relation to navigation conditions and how well a vessel can navigate into the lock on both sides. With the filling and emptying system model, the team is taking a closer look at the details inside the lock, like the intakes, the culvert layout, the outlets and valve operation times.

“We’re measuring the hydraulic forces acting on the vessel,” Hammack said. “We’re measuring filling and emptying times and looking at general flow behavior. That’s where we’re releasing dye to watch how the jets from the culverts are issuing into the culverts and out through the ports. How are those interacting with one another? We’re trying to improve the design there.”

Steve Fritz, mega projects program manager for the Pittsburgh District, said it is more cost-effective to analyze the performance of a scaled model and to “tweak” it than it is to do the same for a full-size facility following construction.

“The physical modeling and analysis that ERDC provided for this project gave us a lot of confidence in our design,” said Chris Dening, Pittsburgh District’s Upper Ohio Navigation project manager. “There’s nothing like physical modeling when it comes to ensuring an investment in major infrastructure, like a new lock chamber, will function as intended.”

Hammack said that because the new locks are going to be on the river side of the existing structure, the Corps is constrained on how it can introduce water and remove it from the system.

“We concluded that we want to do what’s called an in-chamber longitudinal system design, which takes the two culverts out of the walls and brings them into the chamber and puts them on the floor,” he said. “That’s why we’re doing the physical model study. We’ve got unique or uncommon restrictions on the intake and outlet placement that are very site-specific.”

Caption for photo: Researchers at the U.S. Army Engineer Research and Development Center (ERDC) are using a 1:100 scale navigation approach model to test designs for a new auxiliary lock structure for the Montgomery Lock on the Ohio River. The model will help evaluate guard wall lengths in relation to navigation conditions as well as how safely a vessel can navigate into the lock on both sides. (Photo courtesy of the U.S. Army Corps of Engineers)