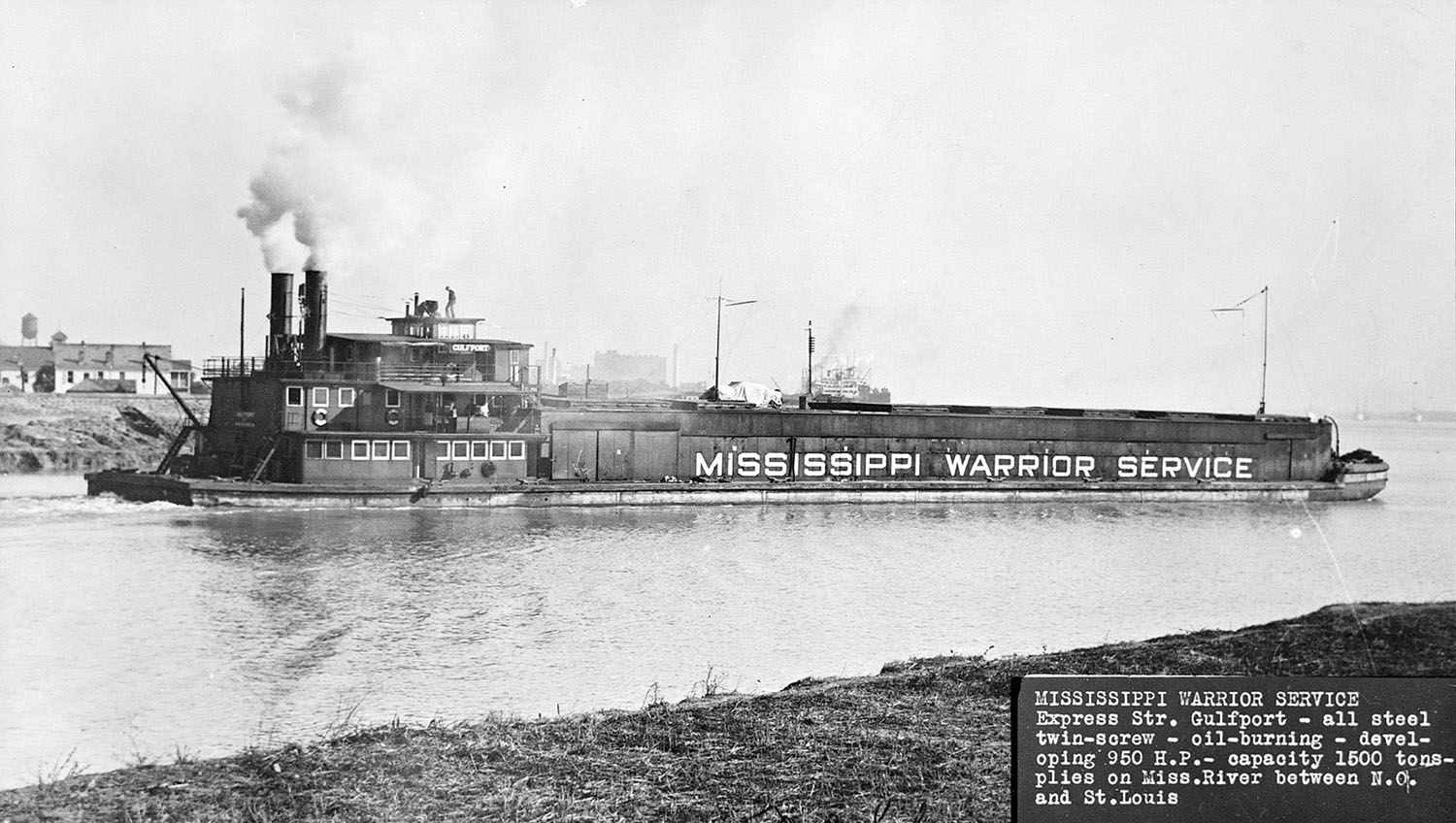 The Tennessee-Tombigbee Waterway Conference scheduled for August 10–12 brings to mind the early involvement that the Inland Waterways Corporation (IWC) had in that area shortly after its formation following the first World War.

Due to its having been owned by the federal government, river interests routinely referred to the IWC as the Federal Barge Line. Early on, the IWC commissioned the building of four self-propelled barges. These were the Birmingham, Gulfport, Mobile and Tuscaloosa. They were steam-powered, 950 hp., built in the St. Louis area in 1920, and were 280 by 49 by 10 feet. Though intended for Warrior-Tombigbee River service, they were usually found in express service between St. Louis and New Orleans. All were dismantled by 1938.

The St. Louis News column of the September 7, 1940, issue of The Waterways Journal noted that “The former Federal Barge Line self-propelled barge Mobile, recently purchased, without machinery, by the Hennepin Barge Line of Minneapolis, was towed into port last Saturday by the Diesel towboat Geo. T. Price. The boat was loaded with 30,000 sacks of sugar from New Orleans.” The column also said that the Hennepin firm had also purchased the barge Gulfport.

Along with the powered barges, the IWC also built a series of steam prop towboats intended for the Warrior-Tombigbee rivers. These were built by the Howard Ship Yard & Dock Company, Jeffersonville, Ind. According to From Paddlewheels to Propellers, a history of the Howard yards by Charles Preston Fishbaugh, the contract to build these boats, at $411,000, was a boon to the Howards, due to a depression in the river industry that had caused lean years.

The boats were innovative-design tunnel-stern towboats with steel hulls 140 by 24 by 8 feet. The engines were triple-expansion 10-1/2’s, 17’s, 27’s with 18-inch stroke rated 800 hp. at 200 rpm. The water tube boilers were oil-fired, and the props were 75 inches in diameter. While the steam sternwheel towboat was the predominant mover of cargo on the Western Rivers, and many more sternwheelers were to be built after 1920, these IWC prop boats were the harbingers of the future of river transportation.

The Cordova was the first of these boats to be launched, sliding down the ways on April 17, 1920. It was followed by the Demopolis and Montgomery. All three would have a long and useful existence, with the Demopolis and Montgomery lasting longest after being rebuilt. The Cordova, according to Way’s Steam Towboat Directory, spent much of its existence running on the Mississippi River. After the IWC interests were sold to Herman Pott/St. Louis Ship and put under Federal Barge Lines, the Cordova was sold in 1955 to A. Marx & Sons, New Orleans, and dismantled.

The Montgomery operated out of Mobile until 1940 when the IWC had it rebuilt as a single-deck boat with retractable pilothouse and utilized it on the Illinois River. It made the news on June 21, 1947, when it struck the Upper Free Bridge at Peoria, Ill., knocking a 240-foot section into the river. In 1949, the Montgomery was converted to diesel power at the Calumet Shipyard, Chicago, where a pair of five-cylinder Fairbanks-Morse diesel engines totaling 800 hp. at 340 rpm. were installed. In 1959, the Montgomery was sold to the Ejras Corporation, Pittsburgh, and transferred in 1962 to John J. Hasson, Pittsburgh. It was dismantled in 1963.

The Demopolis was operated on the Warrior-Tombigbee at first, and also had an altercation with a bridge when it knocked down the Southern Railroad Bridge near Demopolis, Ala., during a flood. (At least the local newspaper shouldn’t have had trouble spelling the boat name.) In the 1933 Annual Report of the Inland Waterways Corporation to the Secretary of Commerce, issued by Maj. Gen. Thomas Q. Ashburn, the head of the IWC, is found the following: “On December 22, 1932, our towboat Demopolis, while in charge of Capt. Edward J. Buck, as pilot, struck a bridge crossing the Warrior River channels at McDowell, near Demopolis, Ala., and the draw span of the bridge went into the river where it still lies. … The history of this matter may be tersely stated.”

The report goes on to explain that the bridge had been constructed without approval of the federal government, first in 1863 and then rebuilt in 1894, and had been considered by the U.S. Engineers to be an unreasonable obstruction to navigation for many years. The railroad had been issued notice to alter the bridge from 110 to 150 feet horizontal clearance in 1917, but the notice had been suspended during World War I and had never been implemented. It would be interesting to dig into the outcome of the lawsuits filed over this incident.

The Demopolis saw service on the Upper Mississippi during World War II, and in October 1943 went to Savage, Minn., on the Minnesota River to bring out the new DPC steamer Bataan. It broke ice the following year to perform the same service for new ocean tankers built for the war effort. In 1952, it was sold to the Commercial Metal Company, Dallas, Texas, for dismantling.

Later sold to Findlay Towing Company, Tuscaloosa, Ala., it was completely rebuilt, including conversion to diesel with Fairbanks-Morse OP engines totaling 1800 hp. The boat continued in operation on the Warrior-Tombigbee system until about 1983. In the 1984 Inland River Record, it is shown in the Off The Record section as having “all machinery removed and sold to Billy Salter, Tuscaloosa.” Some time ago, photos appeared in a Facebook post showing the remains of the Demopolis partially engulfed in mud.