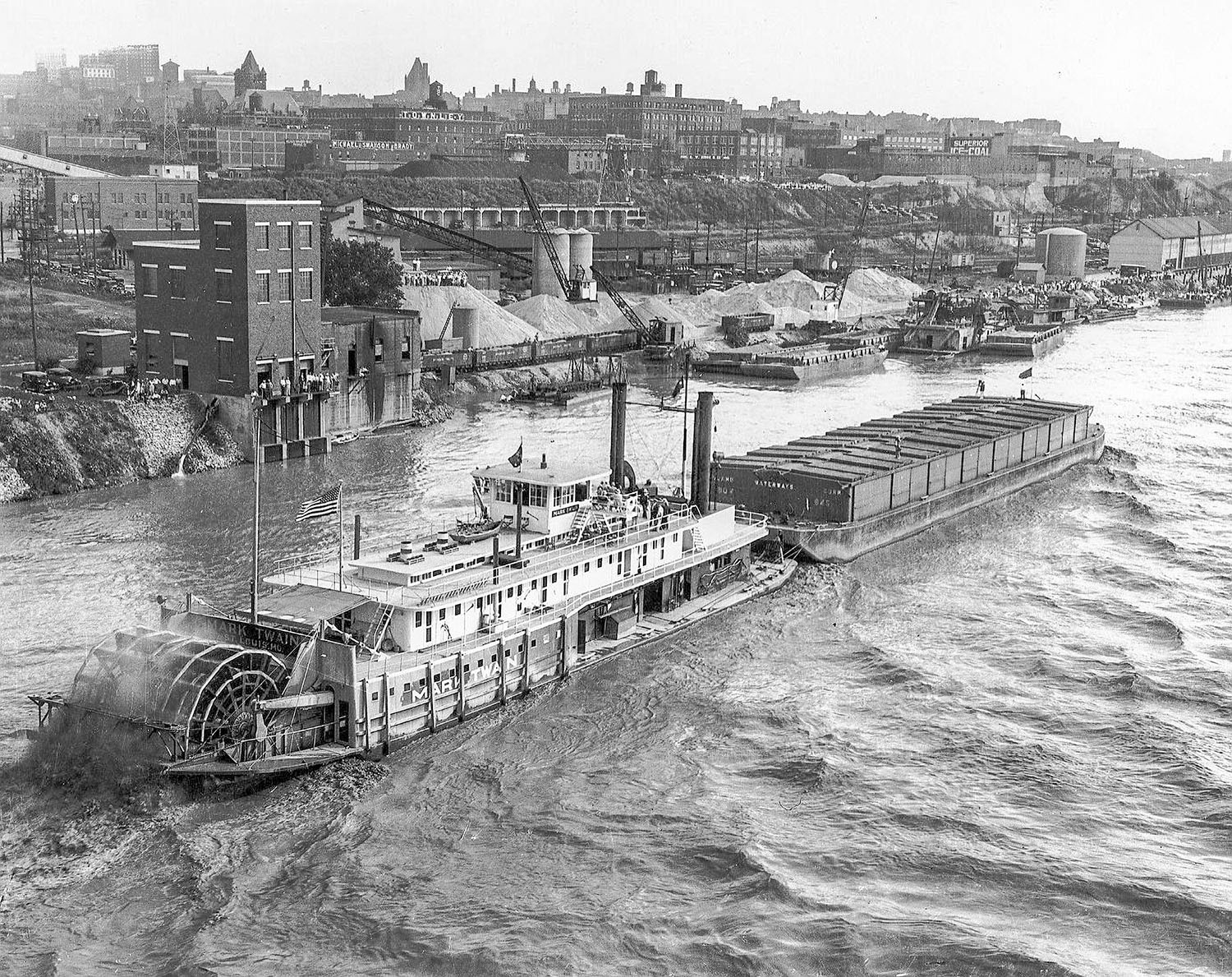 As addressed in this column last week, big things were happening on the Missouri River in June of 1932. The much touted “6-foot channel” was nearly ready for traffic, and the Inland Waterways Corporation (IWC), the government-owned barge line, was ready to test the waters.

Secretary of War Patrick J. Hurley had announced that an inspection trip would be made from St. Louis to Kansas City in order to gain a first-hand observation of the channel conditions. Secretary Hurley and Major General Thomas Q. Ashburn, the head of the IWC, would be on hand for the journey.

The Annual Report of the Inland Waterways Corporation to the Secretary of Commerce for 1932 stated the following: “On June 21, an inspection trip of the Missouri River to Kansas City left St. Louis with the Secretary of War, the Hon. Patrick J. Hurley and Maj. Gen. T.Q. Ashburn on the steamer Mark Twain, with guests and newspaper representatives on the steamer General Ashburn. Each steamer had a barge in tow, and the trip was made by daylight with night stops at St. Charles, Herman [sic], Jefferson City, Boonville, Miami and Lexington, where celebrations were held commemorating this eventful trip. The river was practically bank-full at the time, and the trip was completed June 27, with an enthusiastic reception at Kansas City.”

According to “Soundings—One Hundred Years of the Missouri River Navigation Project” by John Ferrell, the procession up the river was led by the Corps of Engineers launch Catamount in charge of George Kishmar, followed by the Mark Twain and the General Ashburn.

Photos of the Mark Twain arriving at Kansas City show the banks crowded with people witnessing the procession. The throng is evident in the photo accompanying this column. It was taken from the ASB drawbridge, which opened in 1911 and is still in use at Kansas City. The water-intake structure in the background is also still prominent. The guards of the Mark Twain are nearly awash in the muddy Missouri.

In another photo taken just a little later, the boat and tow are arriving at the newly constructed municipal terminal located at the state line between Missouri and Kansas, at the foot of Kaw Bend and just below the mouth of the Kansas (or Kaw) River. A large brick warehouse at the facility was prominently featured in ads in The Waterways Journal at the time by the builders, Woods Brothers Corporation. This terminal is in use today as the public port known as Port KC and is operated by Transport 360. The original brick warehouse was demolished in recent years to make way for additional ground storage space.

After this triumphal entry marking the opening of navigation to Kansas City, Secretary Hurley and General Ashburn were met by a welcoming committee of the Missouri River Navigation Association. Capt. Donald T. Wright, publisher of The Waterways Journal, was in attendance for the festivities and wrote a detailed story of the return trip of the boats to St. Louis for the paper’s July 9, 1932, edition. He refers to the “historical trip on the Missouri of Secretary Hurley” and lists the master of the Mark Twain as Capt. Harry E. Lancaster, with Capts. John F. McIntyre and Robert L. Wilson, pilots. On the General Ashburn, Capt. W.M. Clark was master, with Capts. Murphy G. Smith, Gerald H. Friemonth and Peter Antrainer, pilots.

The Mark Twain had been delivered to the IWC in February of 1932 by the Howard Ship Yard & Dock Company of Jeffersonville, Ind. A ceremony had taken place at Jeffersonville on January 25 where the boat was christened by Mrs. Patrick J. Hurley. Having the distinction of being the last steam towboat built by the Howard yard, the boat had a steel hull 157 by 42 by 6 feet and was a sternwheeler. It had condensing engines 17’s, 34’s, – 9-foot stroke rated at 1000 hp. The sternwheel was 24 feet in diameter and 25 feet wide.

The Mark Twain was very similar to the James W. Good and Patrick J. Hurley, which had been built for the IWC by the Dubuque Boat & Boiler Company in 1930. The IWC utilized it mainly in Upper Mississippi River service and in 1947 sold it to the Mississippi Valley Barge Line Company.

Toward the end of its service, it led the boat parade for the opening of Lock 27 and the Chain of Rocks Canal at St. Louis. It was laid up at Cincinnati in 1954 and dismantled in 1956.