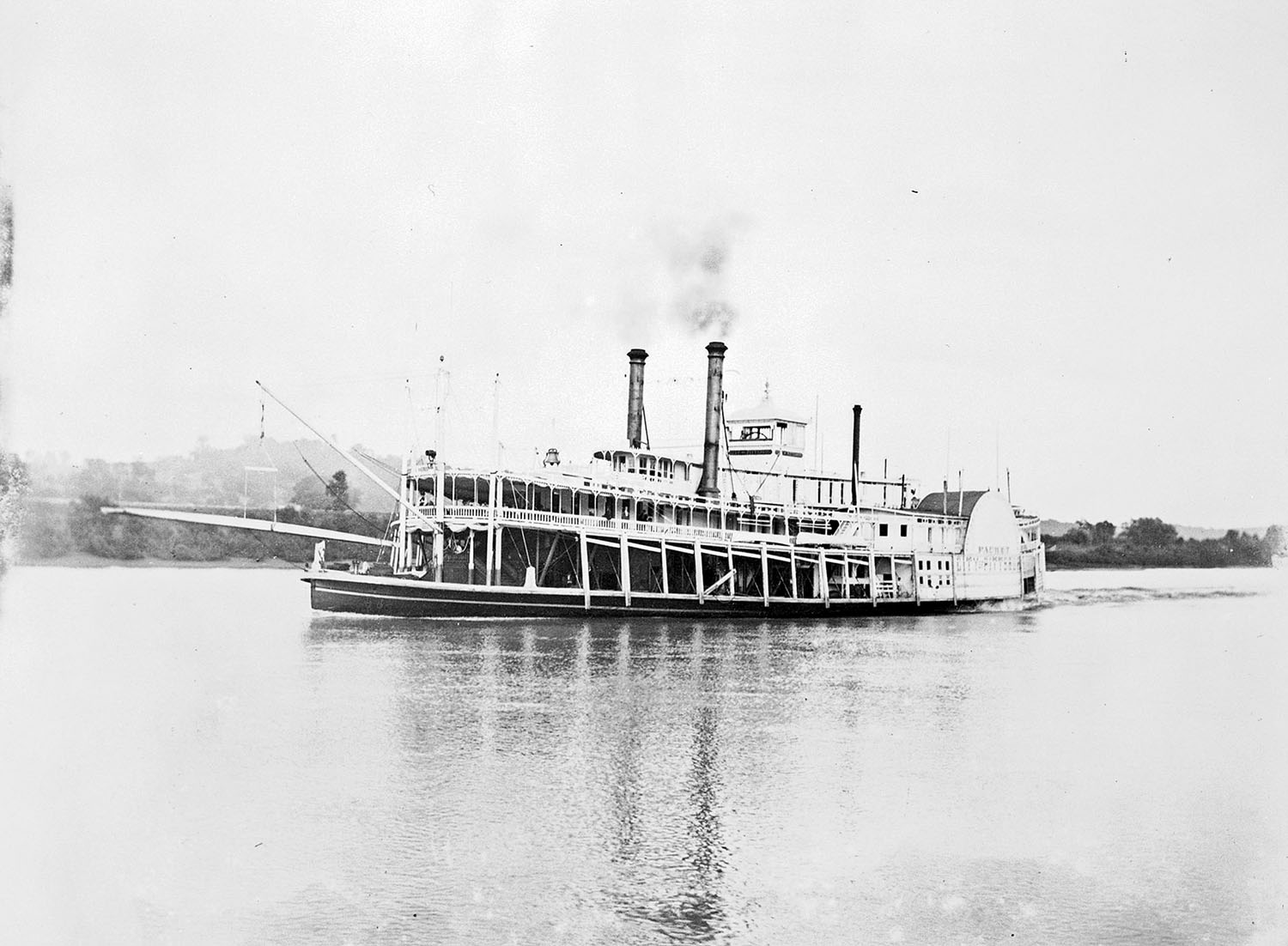 The Incident-Prone City Of Pittsburg

In 1898, a group of investors purchased the Anchor Line packet City of New Orleans with the idea of rebuilding it into a superior Upper Ohio River packet. The City of New Orleans had been built by Howards at Jeffersonville, Ind., in 1881, and in the words of Capt. Frederick Way, Jr. in the March 1968 S&D Reflector, “she was worn out.”

According to Way’s Packet Directory, the investors included Capt. John M. Phillips, Dana Scott, George Wallace, Charles Beckwith and A.L. Brahm. Even though “worn out,” the boat was steamed under its own power from New Orleans to Marietta, Ohio. Perhaps because several of the investors were from the Muskingum River Valley, the Knox Boat Yard at Harmar, Ohio—across the mouth of the Muskingum from Marietta—was selected to do the rebuilding project.

A complete new wooden hull 292.7 by 48.8 feet was built, and though original intentions were to use the whole cabin structure from the City of New Orleans, a new boiler deck, roof and cabin framing complete with skylights was also constructed. The stateroom panels and doors as well as the texas and pilothouse of the old boat were utilized. The pilothouse was slightly lowered, though the Anchor Line domed roof and spire were retained. The original roof bell, whistle and engines, which were 26’s – 10-foot stroke were also transferred to the new boat, which was named City of Pittsburg.

The new City of Pittsburg was scheduled to make a Mardi Gras trip from Pittsburgh to New Orleans, departing the first of February 1899, but due to complications with the boilers, the boat was not completed in time. The City of New Orleans boilers had been scrapped, and the new boilers being built for the boat had single-riveted seams that were outlawed while they were being fabricated. A second set was constructed that had rivet holes that were punched out rather than drilled, and this was illegal, resulting in this set of boilers being condemned. The third set of three boilers that were ultimately installed aboard the boat were of the Scotch Marine type, unusual to the Western Rivers but used widely on the Great Lakes and oceans.

The boat finally departed Marietta upbound for Pittsburgh on March 21, 1899, but within 4 miles had to stop to repair machinery. Before reaching Pittsburgh, the boat again had to stop due to burned boilers, and towboats were engaged to tow it to Pittsburgh. Repairs to the Scotch Marine boilers took several days, and the City of Pittsburg finally departed for New Orleans on March 28. Boiler problems causing low steam plagued the boat throughout the trip, and on the return leg at New Richmond, Ohio, a cylinder head was knocked out and the boat had to drop back to Cincinnati for repairs. In total, the round trip took 28 days, about a week longer than normal.

The City of Pittsburg entered the Pittsburgh to Louisville trade as intended, but it was hampered by low water and ran Cincinnati to Louisville for a time. Continuing boiler problems prompted the order of yet another set of new boilers in the spring of 1900, these from the Portsmouth (Ohio) Foundry & Machine Company. The six new western boilers seemed to finally fix those troubles, and the boat was again entered in the Pittsburgh to Louisville trade. At some point, the domed pilothouse roof and spire were removed.

Low water was again a problem, and the City of Pittsburg was entered in a regular Cincinnati to Memphis run. Capt. Phillips was still the master, with Dana Scott, purser; Clayton Crawford, chief engineer; Harry W. Doss and Al Pritchard pilots and Tom Smith, cub pilot.

The pilothouse and part of the texas were destroyed by fire at Cincinnati on March 6, 1901, and the damage promptly repaired. After departing downbound out of Cincinnati, it struck a pier at Louisville, doing quite a bit of damage.

On Sunday, April 20, 1902, the boat was downbound on the way to Memphis when fire broke out in hay stored in the forward hold at 4 a.m. Capt. Harry Doss was on watch and landed the boat headed upstream along the Kentucky shore near Ogden Landing, present day Mile 956 Ohio River, near the mouth of Redstone Creek. The James River Guide of 1860 shows no settlement in that area, while the 1916 edition of the Engineer Department’s The Ohio River (often referred to as the Jones Book since it was compiled by R.R. Jones) shows Ogden as a community of 30 inhabitants. The 1935 edition of the same publication shows only Ogden’s Landing and indicates 26 residents. Only Redstone Creek appears on current charts.

The crew was unable to contain the blaze, and the boat was totally consumed by the fire. Forced to jump overboard while fighting the flames, Capt. Phillips floated to shore holding on to a wooden trough. Pilot Al Pritchard’s wife and 6-year-old daughter were aboard, and while he and his wife were saved, the daughter drowned after falling in the river when tossed toward a rescue yawl. Pilot Doss’ father, Capt. Sylvester “Wes” Doss, age 76, had been aboard for a vacation. He jumped from the stern and made it to shore, where he died of a heart attack. Cub pilot Tom Smith perished in the flames while attempting to help others.

The location of the incident was so remote that a crewman had to row a yawl down to the small settlement of Olmsted, Ill., to send telegrams about the fire. The small steamer Maude Kilgore came up from Cairo and was the first at the scene to pick up survivors and bodies, and the Str. Joe Fowler was down from Paducah later in the day.

The headline of The Paducah Sun of April 21 read, “MOST TERRIBLE STEAMBOAT DISASTER,” and it was. The story was reported by the New York Times and many other papers across the country. Boats ran excursions from Paducah and Cairo for the public to view the scene while the wreck was still smoldering. The official loss of life was listed at 60, yet over the years many have claimed it was much worse. In the March 1968 Reflector article, Capt. Way relates that he made a trip on the Str. Island Queen with Capt. Harry Doss in 1941 and in discussing the City of Pittsburg disaster, Capt. Doss told him that the death toll was, in reality 81 people. (Then 77, Capt. Doss would continue standing watches on the Island Queen until he retired in 1946, one year before that boat exploded and burned at Pittsburgh.)

Meant to be an outstanding Ohio River packet, the City of Pittsburg instead would be remembered for the many incidents incurred during its career, culminating in the great loss of life at the end. The inimitable Capt. Fred Way described it as “an unbelievable parade of gremlin-grief and goof-grooved tribulation.” He also quoted investor Albert L. Brahm, owner of a meat and grocery wholesale in Pittsburgh, as saying, “If I had converted that money into silver dollars and hired roustabouts to shovel it overboard into the river, I couldn’t have lost it any faster.”