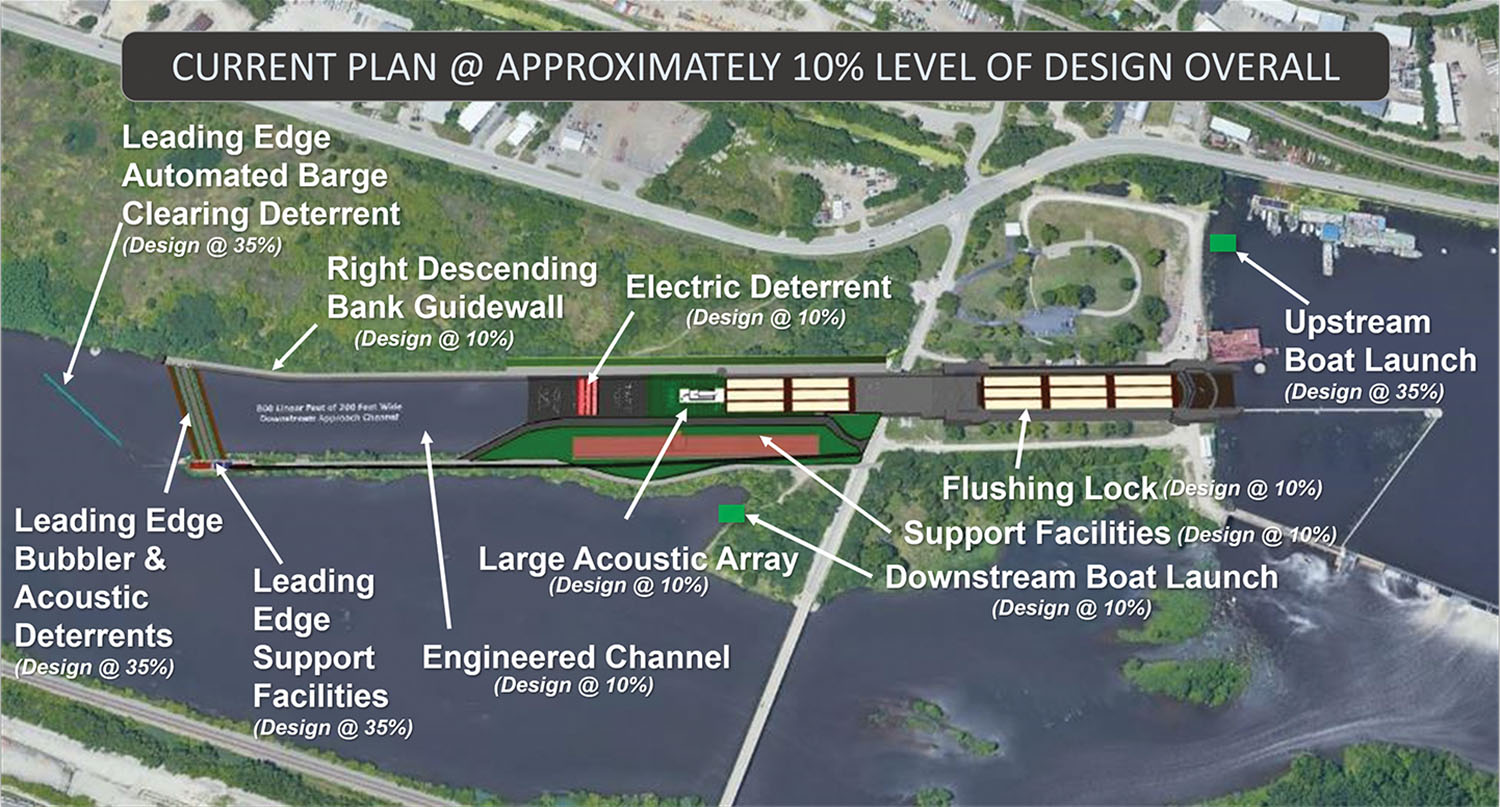 Project directors believe they have enough funding until early January to move forward with the Brandon Road Interbasin Project but might have to stop work after that without a signed Project Partnership Agreement (PPA) with the state of Illinois and additional funding for fiscal year 2023.

Efforts to obtain full federal funding for the project on the Des Plaines River near Joliet, Ill., have so far failed, said Colleen Callahan, director of the Illinois Department of Natural Resources, November 9 in the fifth of the Rock Island District’s quarterly update webinars on the project.

In December 2021, the Council of Great Lakes Governors sent a letter to congressional infrastructure leadership seeking to have the federal government pay 100 percent of the cost of the project, with no required non-federal matching funds, in the 2022 Water Resources Development Act (WRDA) for the project. They wrote that the funding was “beyond the capacity of the Great Lakes states to match.”

Changing the cost-share on the project to require it to come fully from the federal government is not included in draft WRDA bill language, however.

“Short of that, now we’re discussing funding and how we get to that last piece, if you will,” Callahan said.

“Not all of the property in the Brandon Road Project that we think that we may need is necessarily owned by the state or the Army Corps, and so we’ve had discussions about if we need that property and how much we would need and how we would go about acquiring that property.”

The project schedule called for the Project Partnership Agreement to be signed in December, but it also anticipated passage of the final WRDA bill, which still has not cleared both chambers of Congress.

Construction funding for the project is 80 percent federal/20 percent non-federal. However, that could potentially be increased to a 90/10 federal/nonfederal split in the 2022 WRDA, said Andrew Leichty Sr., Brandon Road Interbasin project manager for the Rock Island District. Illinois and partnering Great Lakes states, including Michigan, would have to come up with the remaining funds.

Pre-construction engineering and design was initiated December 29, 2020, when the state of Illinois signed a design agreement with the Rock Island District. This portion of the project is estimated to last three years and cost $28.9 million. The state of Michigan contributed $8 million to the state of Illinois to help with the $10.1 million non-federal portion. The pre-construction and engineering design was funded at a 65 percent federal/35 percent nonfederal split.

The Infrastructure Investment and Jobs Act provided $226 million in federal start funds, which was previously believed to be enough to pay for the project’s initial construction phase, called Increment I-A. Increment I-A is expected to consume about a quarter of the Brandon Road project’s anticipated total cost, according to the project’s website.

Corps officials completed an updated cost and schedule risk analysis at the end of October, but the results are not anticipated to be available until January, Leichty said. During similar reviews, the price tags of some major projects around the country have ballooned with increased materials and labor costs fueled by inflation while others have been impacted to a lesser degree.

While Leichty could not say at this point how much more money will be needed, he did indicate additional funds will be necessary in 2023 to prevent a work stoppage.

Besides the additional funding and the signed Project Partership Agreement, Leichty said plans and specifications to award the contract must be completed and permits and additional real estate acquired before construction can begin. If all of those needs are met, the Corps believes a construction contract for Increment I-A could be awarded as soon as September 2023. A preliminary project schedule calls for the completion of construction for Increment I in 2026, with second and third project increments continuing into 2029.

Leichty said that schedule is very preliminary and subject to change.

“A lot of things can change here quickly going into this next calendar year,” he said.

The Brandon Road project includes multiple layers of structural and non-structural deterrents designed to prevent the spread of invasive species, including Asian carp, from the Illinois Waterway into the Great Lakes.

The design of the first level of deterrents, those included in increment I-A, includes bubble and acoustic barriers, an Automated Barge Clearing Deterrent (commonly called the ABCD) that uses circular currents from air lines and nozzles installed on the bottom of the river to remove fish from the box-to-rake junction of barges in a tow, and an upstream boat ramp for monitoring and servicing equipment.

The design for the entire project, as a whole, is about 10 percent complete, he said. The construction schedule and sequencing are still being worked on, although the Rock Island District hoped to provide an early look at potential date ranges for closures and other impacts to navigation during an Industry Day scheduled in Joliet on November 14. More than 70 contractors, designers and industry representatives had signed up to attend.

When webinar attendees asked if any additional information about that could be shared, none was provided at the webinar but Col. Jesse Curry, Rock Island District commander, said the district realizes the importance of doing so as soon as possible.

“Certainly we take that very, very seriously and work to give the navigation industry as much notice as we can in advance,” he said.

Earlier planning charettes were useful to help define the scope of the project, including potential ways to reduce costs, Leichty said. The result was a plan that includes a shorter engineered channel that is narrower at its upstream end.

The Corps is also looking closely to determine how much additional real estate will need to be purchased for the project and the best way to acquire it, Leichty said.

These deterrents, collectively called the downstream leading deterrents, are at about the 65 percent design level and are under review, Leichty said.

They would be followed by both an electric deterrent and a larger acoustic array. A flushing lock would then flush any egg or larval stages of the carp out of the lock chamber.

Testing for the flushing lock is underway currently at the U.S. Army Engineer Research and Development Center in Vicksburg, Miss.

A field test for the ABCD took place at the Peoria Lock and Dam over the summer and early fall. The ABCD was deemed necessary after laboratory testing determined that small fish and floaters could become entrained in the rake-to-box junction between barges in a tow and carried as far as 12 miles.

Leichty said the field test looks promising but that researchers are now analyzing the data and expect to generate a report in the second quarter of next year.

The goal is to have the planning specifications designed to the 95 percent level in late March or early April, “but to get to that point, we will need additional funding,” Leichty said.