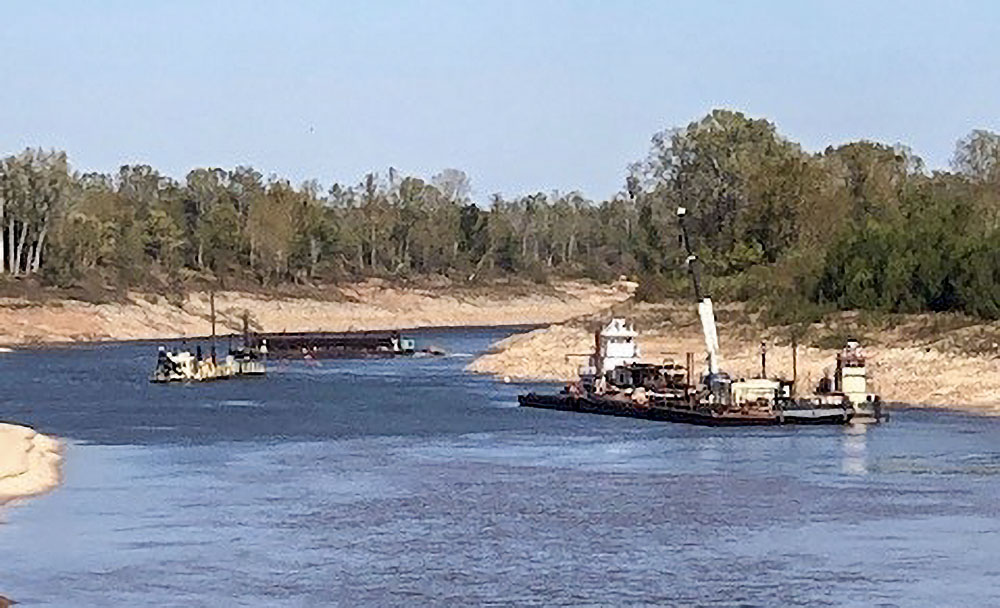 After a two-month closure, which was bisected by a week-and-a-half-long opening to navigation in October, Lindy C. Boggs Lock, the southernmost lock on the Red River, resumed operations November 12 at 7 p.m.

Boggs Lock, also known as Lock 1 on the J. Bennett Johnston Waterway, closed to navigation August 30 for a routine maintenance dewatering. The closure coincided with a dewatering at Old River Lock on the Mississippi River. Old River Lock received new Mississippi-side miter gate leafs and expansion joint repairs throughout. The two locks were originally planned to both reopen on November 12 but work at Old River wrapped up a week ahead of schedule.

Over the past month, as drought conditions worsened across the region and as the Mississippi River dropped lower and lower, Red River stakeholders became increasingly concerned that the available draft of the navigation channel below Lock 1, often referred to as “the gauntlet,” would drop below the authorized 9 feet. Fortunately, rain in the region and coordinated reservoir releases upriver into the Mississippi have translated into higher stages on the lowermost portion of the Red.

“Yesterday, it looked like the tailwater below Lock 1 was above 9 feet, so that’s a good thing,” said Paul Richards with the Vicksburg Engineer District during a November 15 Red River Valley Association conference call.

As of November 16, the river gage below Lock 1 was at about 6 feet, up from a low of 3 feet on October 28. A reading of between 5.5 feet and 6 feet at the lower approach to Lock 1 translates to an available draft of about 9 feet in the channel.

Craig S. Ross with the National Weather Service’s Shreveport, La., forecasting office said the near-term outlook for the region’s waterways is stable, with the next storm system forecast for Thanksgiving weekend.

“On the other hand, some beneficial rainfall was received in the lower Ohio River Basin through this past week,” Ross said on the November 15 call. “Consequently, a fair-sized bump has developed on the middle and Lower Mississippi River Basin that should relieve the low-water situation from Cairo down southward.”

Still, shoaling as a result of this extended low-water season has constricted the lower approach to Lock 1 and the Red River’s gauntlet section. Operators have reported a particularly troublesome chokepoint between Miles 38 and 39 near a hairpin curve in the river. The U.S. Coast Guard’s Aids to Navigation Team Colfax has reset buoys to mark the current trouble spots.

The Vicksburg Engineer District has deployed the dredge Dubuque, which began dredging at the lower end of Lock 1 on November 16.

“It may take them a little while to shuffle into place,” Richards said on the November 15 conference call, “but we should have everything ready to go in the morning.”

During dredge operations, Lock 1 will be closed to navigation between 6 a.m. and 6 p.m. Vessels will be able to transit the lock during overnight hours. Corps officials said it will take five or six days to dredge Lock 1 lower, with work in the gauntlet to follow.

Caption for photo: Dredge Dubuque at work in the lower approach to Lock 1 on the Red River. (Photo courtesy of Vicksburg Engineer District)