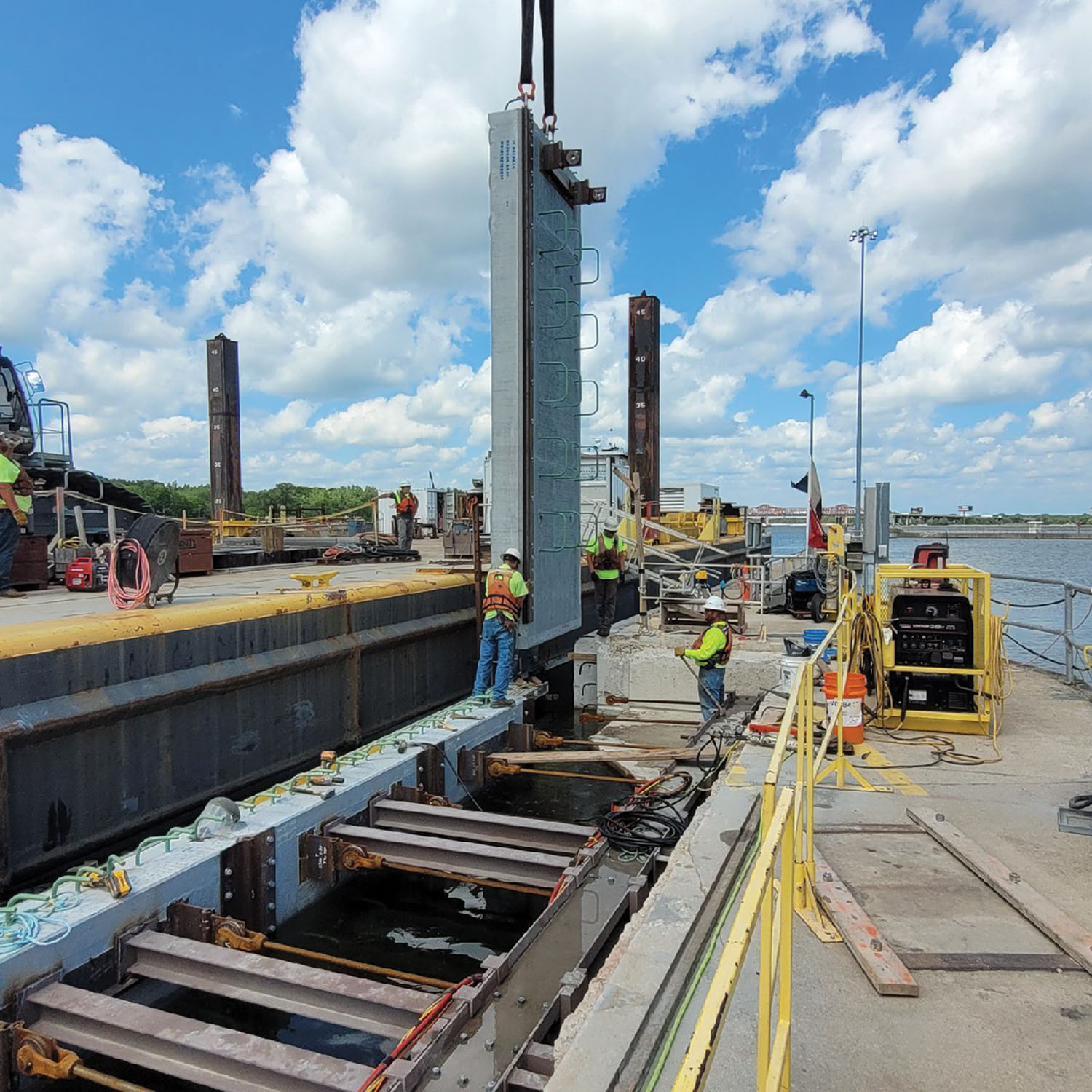 The scheduled 120-day closure of the Illinois Waterway later this year will start a month earlier than a similar closure in 2020 and is less extensive, while still critical for maintaining the reliability of the locks and dams on the waterway.

Tom Heinold, chief of operations for the Rock Island Engineer District, provided an overview of the planned work, which is to take place between June 1 and September 30.

The Brandon Road and Dresden Island locks and dams will receive the brunt of this year’s focus on maintenance and repair efforts, he said. Both will receive new miter gates and replacement machinery as well as anchorages. At the same time, Marseilles Lock will be dewatered to allow for installing conduits beneath the lock chamber necessary for relocating electrical equipment to the land-side of the lock in the future.

Alberici Constructors Inc. has the contract for the work at Dresden Island Lock. J.F. Brennan Company Inc. is performing the work at Brandon Road Lock. Corps of Engineers crews will complete the electrical work at Marseilles Lock.

Miter gate machinery will not be replaced at Starved Rock or Marseilles in this closure, as originally scheduled. Unfortunately, Heinold said, project cost inflation means the Corps no longer has the necessary funds to do that work during this contract.

“That machinery is being fabricated, but it will have to sit and wait to be installed,” he said. “It’s pretty disappointing, and there will be some future impacts, but I guess the fortunate thing is that it was the lower priority work, and the future impacts should be delays and not a 120-day closure.”

The district has spent the past several months preparing for the closure. That included a three-week closure at Brandon Road last August and September to install bulkhead slots to allow for lock dewatering. Preliminary contracts were also necessary to manufacture miter gates at Dresden Island and Brandon Road as the lead-time for new miter gates exceeds two years, Heinold said. Similarly, sector gears, which are roughly 20 feet in diameter, have been fabricated in advance.

The Corps worked closely with navigation interests in scheduling the consolidated closures both in 2020 and 2023, working around typical periods of high water as well as the brunt of the harvest season. Heinold said the Corps also learned several lessons from the 2020 closure.

“We learned how to more efficiently mobilize our own fleets and work with construction contractors to get work done,” he said.

That has included borrowing bulkheads from sister districts to make sure there are enough on hand to close the single-chamber locks all at once.

“Dewatering this many locks at the same time, it takes cooperation across district lines to get that all done,” Heinold said.

Rock Island District personnel have also already met with contractors, well before they begin moving equipment to the site, and have established goals for the team. In early December, the groups completed a rehearsal of concept (ROC) drill with large-scale maps of the locks and models of available boats to establish a projected timeline indicating what work will be done by which vessels in what order.

They also looked at problems that cropped up in 2020, such as when there was difficulty pumping down the chamber at Starved Rock because of the abundance of Asian carp.

“We’re ready for that this time around,” Heinold said.

One factor that will make the work easier this time is that the chambers involved aren’t likely to be subject to seasonal floods, he said. That is allowing the closure to begin in June instead of July, as it was in 2020. In turn, that allows more time for work to be completed before harvest season picks up in October.

Heinold said he isn’t worried about completing the work within the 120-day time period.

“We anticipate having traffic moving by the end of September,” he said.

Additionally, the repairs this year complete the major work on the locks and dams. While a short closure will be necessary at the Lockport lock in 2024 to install new lift gates, and machinery installations for Starved Rock and Marseilles could be scheduled to take place within a few years, those projects will take weeks, not months.

He said, “After the work this summer, our intent is to go for another generation and not have an extended closure,” he said.