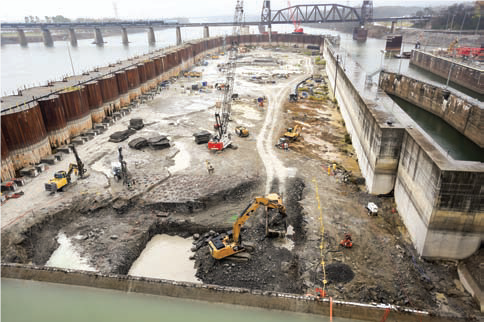 For now, work is proceeding slowly but steadily on the new replacement lock for the 78-year-old Chickamauga Lock and Dam, even though its funding future remains uncertain.

Funding issues have plagued the Chickamauga project throughout its history. The design of the new lock was completed in 2009. A horseshoe-shaped cofferdam that can be pumped out to provide a dry workspace for equipment was completed in 2012.

The cofferdam was filled with water and “mothballed” when funding for the lock and dam project ran out that year.

After a three-year hiatus during which no work at all was done on the project, Congress restarted funding in 2015.

Last year, to accelerate the work, the project received a welcome budget boost of $37 million from the Corps of Engineers Work Plan. Sen. Lamar Alexander (R-Tenn.), who chairs the energy and water appropriations committee that is responsible for funding for the Corps of Engineers, helped make that happen.
That money has all been obligated, according to Nashville Engineer District project manager Adam Walker, who is overseeing the excavation and construction work. He told The Waterways Journal that it went to two contracts, one for lock excavation and the other for lock construction.

The excavation contractor, Heeter Geotechnical Construction LLC of
Mount Morris, Pa., has been blasting rock from the riverbed to prepare the new lock’s foundation. In total, said Walker, about 100,000 cubic yards of rock will be blasted away—enough, said Walker, to fill a football field-sized space to a height of 46 feet. That work is expected to be completed by November of this year.

The blasting does not disrupt navigation, said Walker. Once or twice a day, barges carry blasted rock material across the channel, but those trips are coordinated with the lock master so as not to disrupt commercial traffic. The vibrations from the blasting proved to be slight enough that a nearby highway bridge did not have to be closed as originally planned.

The other contract, for lock construction, was awarded to St. Louis, Mo.-based global engineering consulting and construction firm AECOM Energy and Construction Inc., of Greenwood, Colo.

Because of expected funding uncertainties, that contract has some unique features. The base contract is worth about $29 million, but it contains 13 options that, if all exercised, could balloon the total contract value up to more than $240 million. That contract structure gives both parties flexibility without having to go through the contract bidding and award process again. Depending on when options are exercised, the contract could stretch anywhere from five to seven years. AECOM has been setting up a concrete batch plant on site.

Continued concrete growth in the existing lock is handled by operations and maintenance funds, a separate money pot. “I’m not involved with that [maintenance work], but that ongoing work is done primarily by our in-house Corps workers and equipment,” said Walker. A contract to install rock anchors to the lower end of an existing river wall is scheduled to be advertised this year to help stabilize it.