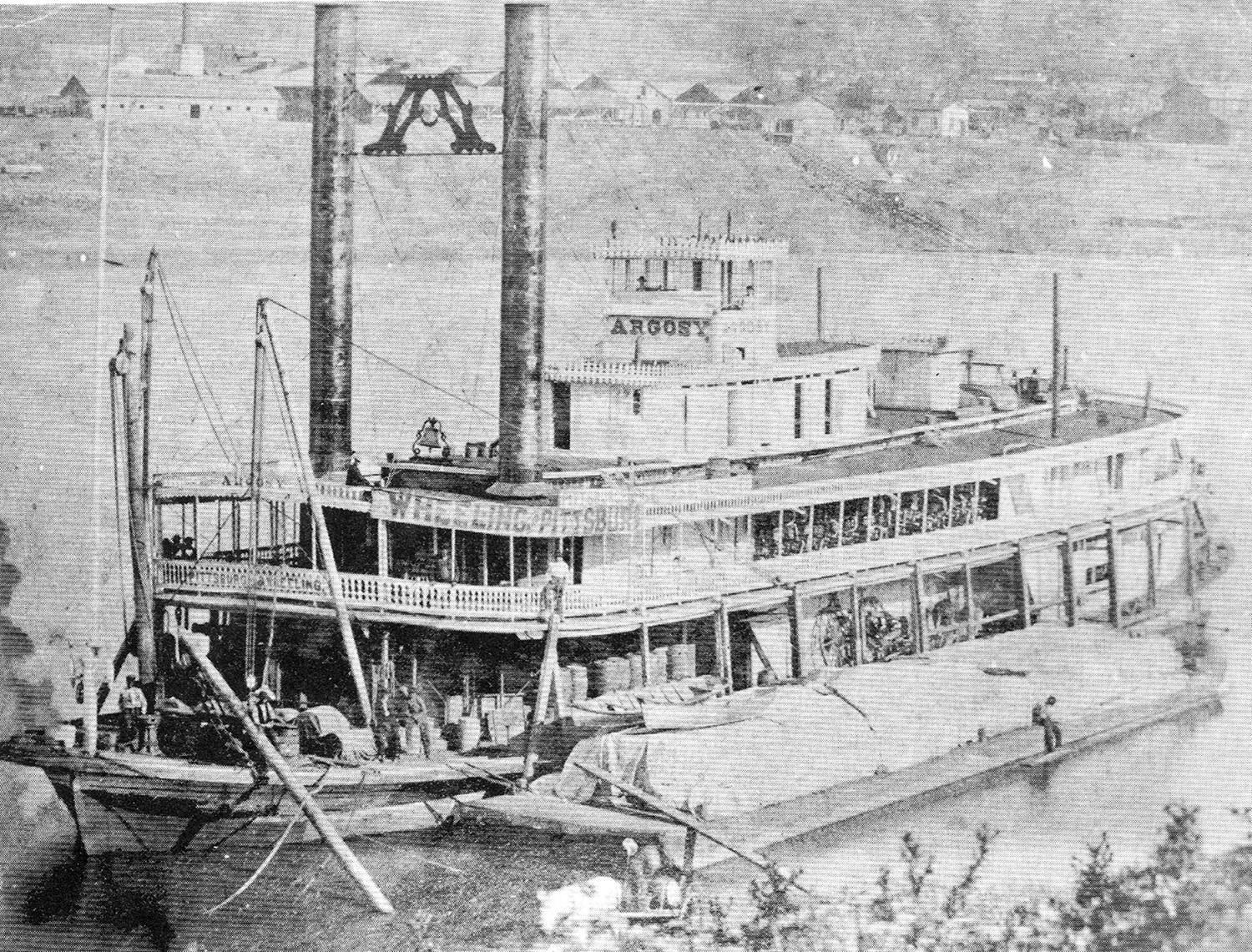 The sternwheeler Argosy was built in 1864. A notification of the new boat appeared in a Pittsburgh newspaper on November 30: “This is the third boat of the name, the other two having been purchased by the United States for gunboat purposes. The hull measures 155 by 33 by 5, constructed by Latta at Monongahela City. Foster & Company built the engines, 15-1/2 bore by 5-foot stroke. It carries three boilers, each 38 inches in diameter by 24 feet long, made at the Herron Works. Buntling, Miller & Company built the cabin. The control has been bought by Capt. Lew Vandergrift, who assumes command and is loading for St. Louis.” The riverboat operated regularly in the Pittsburgh–Cincinnati packet trade.

On August 21, 1865, the boat was ascending the Ohio River loaded with some U.S. soldiers of the 70th Ohio Infantry, returning to Cincinnati from war duty. Some 80 miles below Louisville, at Hatfield Landing, a storm with tornadic winds blew the steamboat into the Indiana shore. As a result of the grounding, the mud drum exploded. Forty soldiers jumped overboard to avoid the escaping steam, eight of whom drowned. Twelve soldiers were scalded, two fatally.

Ironically, the first boat to arrive on the scene also was named Argosy, the first boat (built in 1862) of the name. This vessel had been obtained by the government for transport service in 1863 and had been sold at public auction to Capt. U.P. Schenck of Vevay, Ind., on August 17, 1865, just two days prior to the explosion. The original Argosy took the soldiers to Louisville, where they were conveyed to Cincinnati by the U.S. Mail Line steamer General Lytle. Reportedly, most of the men boarded trains of the Little Miami Railroad to complete their journey home.

The fatally injured soldiers were buried in a mass grave, later marked with small individual monuments, near the site of the tragedy at Magnet, Ind., also known as Rono. An historical marker was erected near the grave by the Indiana Civil War Centennial Commission in 1965.

The Argosy No. 3 was taken to Pittsburgh during the summer of 1866 and rebuilt at the James Rees shop. Larger engines (16-inch cylinders with 5-foot stroke) were installed before the boat again entered the Pittsburgh-Cincinnati trade with Capt. Vandergrift in charge. Capt. James Rowley and Capt. William Hall were the pilots.

In the autumn of 1868, Vandergrift loaded 600 tons of iron ore aboard at LaGrange Landing, Tenn., and brought it to the Upper Ohio River. During the summer of 1869, the riverboat ran in the Pittsburgh-Cincinnati trade. The vessel was sold late that year to Capt. William List and W.J. Anderson, who ran the boat in the Pittsburgh-Portsmouth trade. In 1873 the steamboat was chartered to carry Dan Rice’s Circus; after touring the Ohio River it journeyed down the Mississippi 50 miles below New Orleans to Myrtle Grove Plantation.

After a colorful career, the Argosy No. 3 towed salt from Pomeroy Bend to Louisville. The boat was dismantled and taken off the lists in 1875.