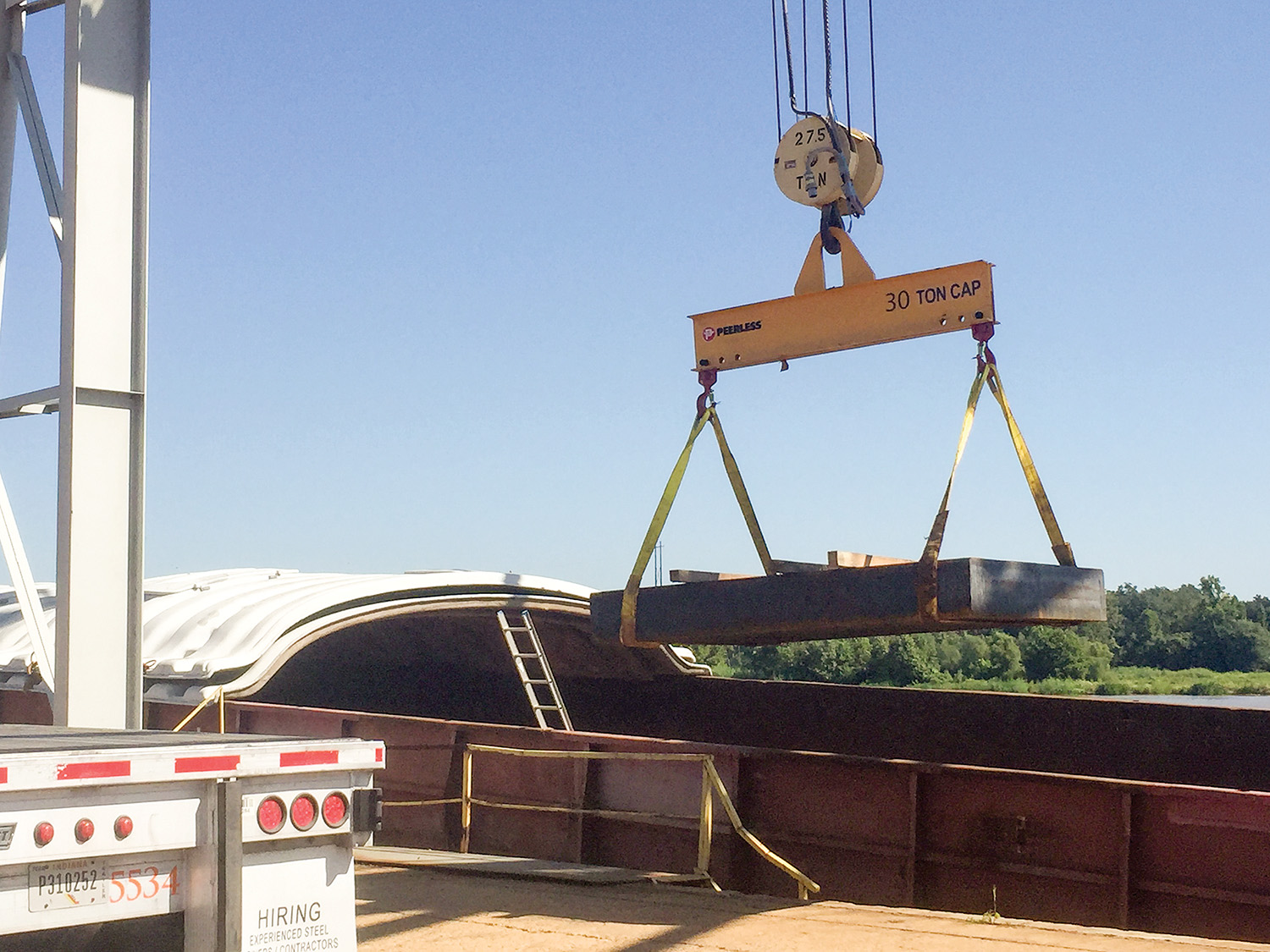 The Port of Caddo-Bossier, located on the west bank of the Red River just below the city of Shreveport, La., has seen some exciting traffic over the past year thanks to a new partnership with Nucor Corporation, one of the United States’ largest steel producers.

In 2017, Nucor began moving steel coils by barge via the Red River to the Port of Caddo-Bossier. Once there, the coils are then transferred onto trucks and delivered to Nucor’s facilities in eastern Texas. Nucor operates a steel plate mill just west of Shreveport in Longview, Texas.

Nucor has even partnered with other port tenants, which has allowed for combined shipments and lower transportation costs, according to the port.

The partnership with Nucor brought a dramatic increase in barge traffic at the Port of Caddo-Bossier in 2017 compared to the prior year. In 2016, just under 174,800 tons of cargo passed through the Port of Caddo-Bossier by barge. In 2017, total barge tonnage was 512,333 tons—a 193 percent increase compared to 2016. And that surge has continued into 2018. Through the end of March, just under 99,000 tons of cargo had been brought to the port by barge, compared to just under 77,000 tons for the same period in 2017. That represents a 29 percent increase over a three-month period.

And that growth in barge traffic is leading to facility expansion for the Port of Caddo-Bossier, which is adding 50,000 square feet onto an existing 100,000-square-foot warehouse for much-needed staging area.

“There’s no doubt 2017 was a comeback year for the port given the activity for the previous years,” said Port of Caddo-Bossier Executive Director Eric England. “Nucor saw the logistical advantage of barge transportation through our port. We look forward to an even better 2018 facilitating their transportation needs.”

One interesting fact about the Port of Caddo-Bossier: the port’s stevedores also serve as its short line railroad conductors and are all certified by the Federal Railroad Administration.

The Port of Caddo-Bossier covers 2,300 acres about four miles below Shreveport and consists of an industrial park and multimodal transportation and distribution center. Besides being at the head of navigation of the Red River, the Port of Caddo-Bossier offers easy access to both Interstate 49 to the north and south and Interstate 20 to the east and west. The port also offers an impeccable waterway down the Red River, through the system’s five locks, to the Mississippi River and the remaining western rivers and Gulf of Mexico.

While not a large port, the Port of Caddo-Bossier is a fast-growing and relatively young port. The port’s governing body, the Caddo-Bossier Parishes Port Commission, was formed in 1962. The port itself came online in 1995 following the completion of the J. Bennett Johnston Waterway, the formal name for the navigable portion of the Red River that stretches from Shreveport to where the river meets the Atchafalaya and Mississippi rivers. Since commercial navigation began in 1995, some 9 million tons of cargo has passed through the port.

Commercial navigation took a nearly 160-year effort to achieve, and work to establish ship traffic on the Red River is actually where Shreveport gets its name. In the early 1800s, travel on the upper reaches of the Red River was stymied by what was called the “Great Raft,” a miles-long driftwood log jam on the river. Archeologists and historians believe the Great Raft might have dated back hundreds of years.

In the 1830s, Capt. Henry Shreve, a steamship builder and captain, began efforts to remove the logs that had long clogged the Red River. Shreve’s work to clear the Great Raft is memorialized in the name of Shreveport. The log jam actually reformed in the 1870s, but was cleared more expeditiously with the use of dynamite.

Today, ports and operators on the Red River don’t have to contend with large-scale log jams as in the 19th century, but sedimentation, particularly at the approaches to the system’s five locks, can restrict navigation following high-water events. Currently, the dredge Integrity is clearing lock approaches following high water in March.

Waterways stakeholders are also lobbying Congress to approve and fund a measure to deepen the waterway from 9 feet to 12 feet. That extra 3 feet of channel depth would represent an increase of 500 tons of capacity per barge, resulting in significant savings for shippers. Stakeholders hope to have the project included in this year’s Water Resources and Development Act (WRDA) bill.

To learn more about the Port of Caddo-Bossier, visit www.portcb.com.