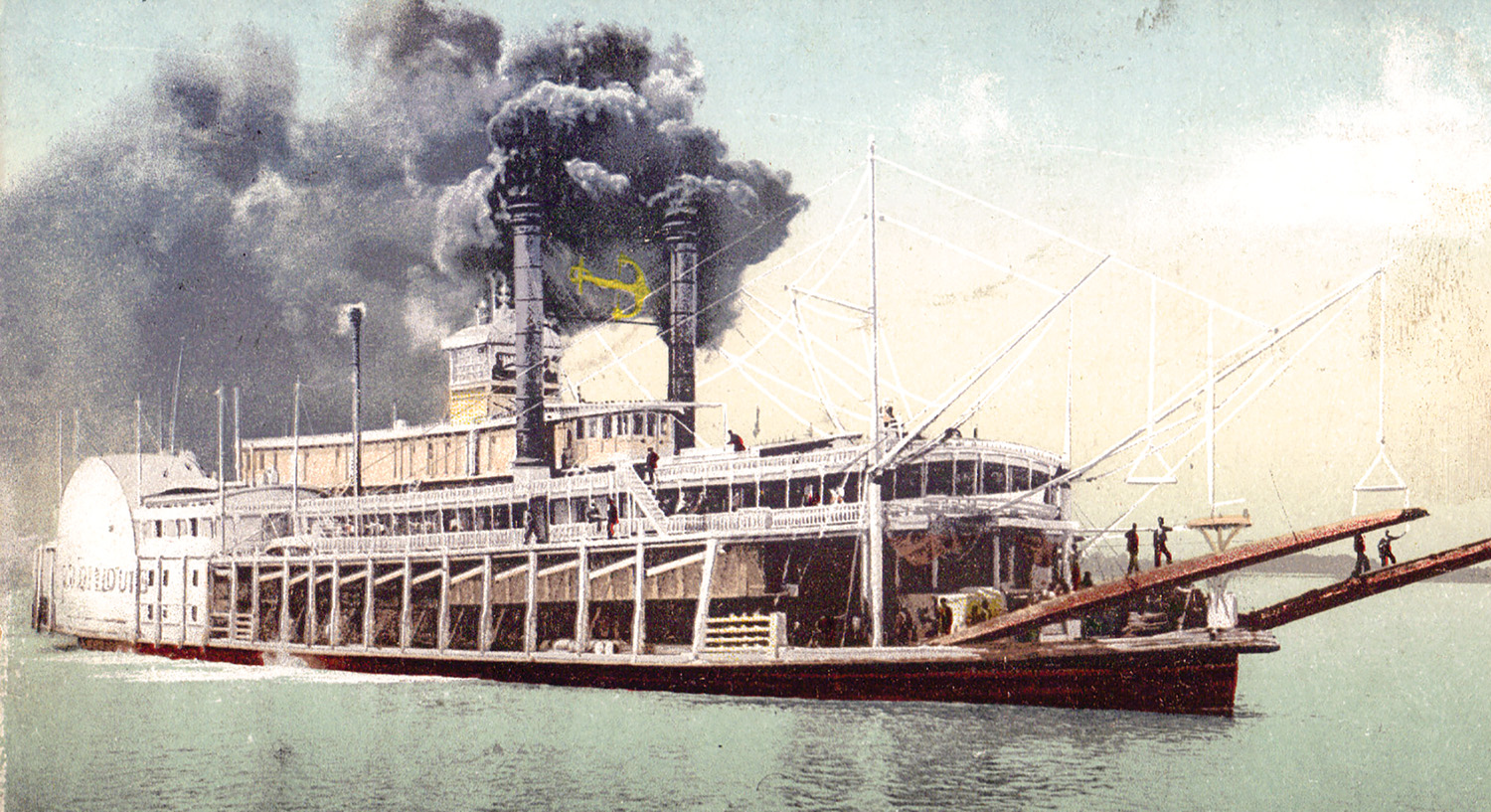 In last week’s Old Boat Column, we presented the sternwheeler Saint Louis; this Memorial Day issue will focus upon the sidewheeler City of St. Louis, famous in the annals of steamboating.

Built in 1882 by the Howard Shipyard at Jeffersonville, Ind., for a contract cost of $86,850, the packet was constructed on a wooden hull measuring 300 feet in length by 49 feet in width.

Launched in 1883, the big sidewheeler carried five boilers, which supplied steam to engines having cylinders of 26.5 inches with a 10-foot stroke. The paddlewheels were 34.5 feet in diameter with 15-foot bucket planks. The smokestacks rose 70 feet above the hull.

The palatial riverboat was owned by the famous Anchor Line, with Capt. James O’Neal in command; Capt. Charles O’ Neal and Capt. Joe Bryan were the pilots. According to a St. Louis newspaper, a rather uncommon feature aboard the steamboat was a “chart room,” with large windows installed at the forward end of the texas. Reportedly, this was for the unlimited use of passengers and would hopefully serve to discourage them from visiting the pilothouse.

The boat was sold for a high bid of $19,050 at a U.S. Marshal’s sale, held at St. Louis in the spring of 1898. Ownership was conveyed to Capt. W.H. Thorwegan, who became the boat’s master with Charles Berkley serving as clerk. In his retirement years, Berkley, a native St. Louisan, often made presentations on river history to the fifth grade classes of river historian Ruth Ferris, who was on the teaching staff of the Community School for 35 years.

The riverboat was briefly owned by the Columbia Excursion Company until it was sold in 1899 to James Grasty. By 1901, the City of St. Louis was running excursions at New Orleans; a very special guest on a harbor cruise was President William McKinley.

In early 1903, the boat was sold to the Greater New York Home Oil Company, but a United States marshal intervened and sold the vessel instead to Marshall Miller, an attorney, for $3,125.

In the autumn of that year, the boat made a rather unsuccessful round trip from St. Louis to New Orleans. During the upbound trip, the riverboat suffered mishaps at Natchez and Vicksburg, causing lengthy delays for repairs. When the boat, in command of Capt. L.A. Mehaffy, arrived back in St. Louis on October 23, it was immediately hauled out on the marine ways at Carondelet, Mo. One of the principal owners of the steamboat at that time was George Clifton, of Greenville, Tenn. While laid up at Carondelet, the boat was totally destroyed by fire on the night of October 29. The loss was estimated to be $35,000.

The large roof bell was salvaged from the ruins and sold to J. Frank Ellison for use on the sternwheel packet Queen City. When that steamboat ceased operation and was partially dismantled in 1933 to become a wharfboat at Pittsburgh, the bell was utilized aboard the towboats Mildred and John W. Hubbard, as well as the packet Ouachita. In 1947, the bell was installed by Greene Line Steamers aboard the Delta Queen, where it remains today.

An excellent model of the City of St. Louis is displayed in the offices of The Waterways Journal. Built by A.F. Winn, the three-foot-long model is lighted and was featured at the Mississippi Panorama exhibition of the Saint Louis Art Museum in 1949.