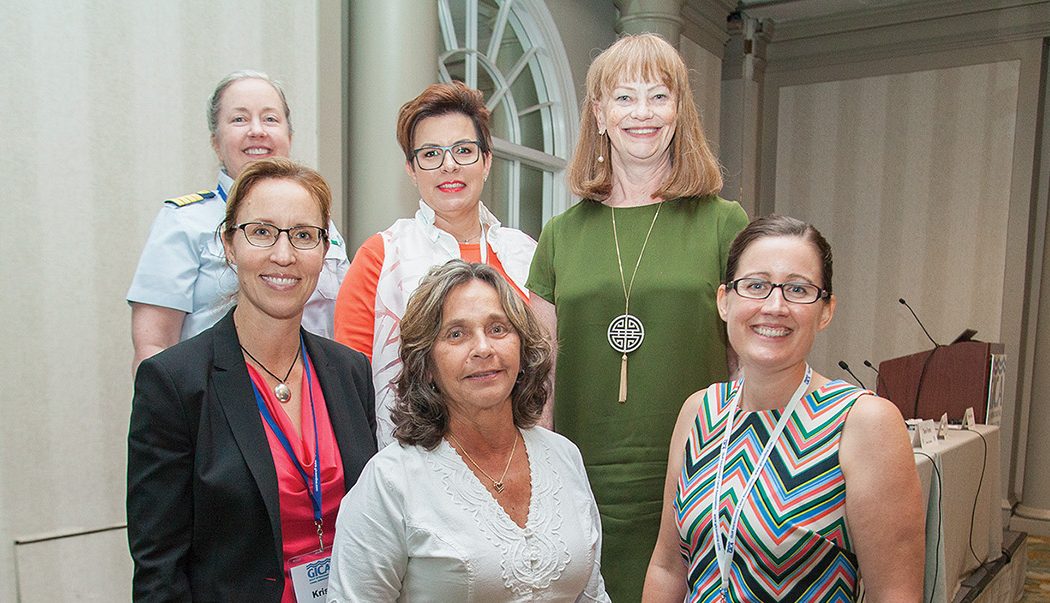 A new and timely addition to the agenda at the Gulf Intracoastal Canal Association’s annual seminar August 1–3 was a panel titled “Brownwater Women,” which featured six women in conversation about their experiences in the maritime industry.

One by one, each panelist shared how she was introduced to the maritime industry, reflected on early experiences, and discussed how the industry has changed over the years, especially regarding the role women play in it.

Felder, who started out in the maritime industry 40 years ago, led off, emphasizing how rich and rewarding her career has been.

“It’s been an amazing career, and I’ve loved every single minute of it,” Felder said.

Felder said, in some ways, she doesn’t feel as if the role of women in the maritime industry is anything new. Still, when she was asked to be a panelist discussing “brownwater women,” it made her stop and reflect on what has changed over the years.

“From my perspective, we’ve been doing this for a while, very quietly getting the job done,” Felder said. “Then I gave it some thought, and thinking back to 40 years ago, I was usually the only woman in the room.”

Even so, Felder said she never questioned her role or that she belonged.

“No one ever made me feel like I didn’t belong in the industry,” she said. “Quite the contrary, all the captains and pilots and the rest of the crews always loved to share their experiences, their knowledge, their information.”

Throughout her time on towboats, Hammond said she had a wide range of roles, from decking and cooking to keeping watch and assisting the engineer on board.

“I’ve asked every dumb question known to mankind, I’ve been made fun of, I’ve been criticized, I’ve been reprimanded and I’ve served as a member of the crew,” Hammond said. “So everything I know, I learned from the mariners out on the boats.

“And I will tell you without question they are some of the most wonderful individuals I’ve ever had the opportunity to meet,” she continued. “They have this industry in their blood, their life, their love. They treasure what they do. They enjoy what they do. They’re passionate about what they do, and they’re truly proud of what they do. I was received well by them.”

Shoreside, though, Hammond said it was tough early on with so few women in the industry who were peers and colleagues. She recalled the first time she attended the Greater New Orleans Barge Fleeting Association’s conference.

“It was the first time I’d traveled by myself to any kind of meeting, and I can remember Cherrie at the reception desk,” Hammond said. “I can remember going into that room, and there were nothing but men.”

Hammond said she recalls being so intimidated that she didn’t attend the opening cocktail reception.

“For years, I didn’t talk,” she said. “I would simply take notes and report back things I’d learned.”

But it didn’t stay that way, she said. In 1994, Inland Marine joined The American Waterways Operators (AWO). Hammond became a voice for smaller companies, she said.

“I was a strong advocate and very passionate about the fact that small companies were being labeled as bad operators,” Hammond said. “I resented it, because we had good people, we took pride in what we did, we were safe, we were professional.”

“That operations manual then became a template for the RCP,” she said, referencing AWO’s Responsible Carrier Program. “That was when people started to realize I could talk and maybe I knew what I was talking about.”

Hammond said her view is that sometimes women have to prove they know something, whereas it’s assumed that men do.

“I had to prove to people that I did know what I was talking about,” she said. “AWO provided me a voice, a forum, an opportunity to take my career in a direction I never thought possible—that is being a member of the Towing Safety Advisory Committee, being engaged with regulations, being on different committees, being chairman of different events.”

Foret, who has 25 years in the industry, started out in 1993 with Hollywood Marine. She, like Hammond, said she learned the industry by interacting with mariners, particularly in a training environment. She spent six years at Hollywood, through the company’s merger with Kirby Inland Marine, then spent about a year away from the maritime industry.

“I realized just how much I missed operations and working with the people to develop training,” she said.

She got back into the industry and eventually began doing vessel audits.

“I was the first woman who was out there doing RCP audits,” Foret said. “Initially, I think I got a lot of jobs out of pure curiosity.”

Foret recalled her first industry meeting, which like Hammond’s was in New Orleans.

“It was an AWO meeting,” Foret said. “I walked in and I was one of four women in the room. This was just a few short years after Cathy was one of two or three women.”

Foret described Felder and Hammond as trailblazers for women in the maritime industry. Looking at their example, Foret offered a poignant takeaway for the GICA audience.

“I would say don’t make excuses—make a way,” she said.

McCarthy, the youngest member of the panel, got her start in 2006 at AWO. Four years later, she began in operations at Canal Barge in New Orleans. McCarthy was fast to point out that the maritime industry as she’s experienced it is a lot more open to women than in decades past.

“I owe a great debt to everyone who came before,” she said.

McCarthy said she feels that the industry is very merit-based and passion-based, which opens opportunities for women and men alike.

“We have a relatively high-risk industry and bad things can happen,” she said. “But if you know what you’re doing, then it’s game on. Also, it’s a passion-based industry with a lot of family companies. … If you’re passionate too—I think that’s what’s opened the most doors for me.”

McCarthy said she’s never felt limited in her role, but she has had to navigate clashes between traditional and contemporary points of view.

“I think today’s challenge can be a little more artful of navigating those things when the intentions aren’t bad,” she said. “You’re more educating people than anything.”

McCarthy attributed the growth of women in the industry to three main causes: changing attitudes toward women in the workplace in general; technology, which allows work access remotely during maternity leave, for example; and industry groups for women. McCarthy mentioned three associations in particular: WISTA (Women’s International Shipping & Trading Association), WIMOs (Women in Maritime Operations) and ADMIRALTY, a networking group for young adults in the industry.

“We’re able to make connections really fast,” she said, adding that those connections help retain women in the maritime industry for the long term.

Twomey then described how she has experience both in the merchant mariner world and in the Coast Guard. She attended the United States Merchant Marine Academy in Kings Point, N.Y., where during her last three years she was the only woman in her class. She in particular had a message for younger people entering the industry and for those without a legacy connection to the waterways.

“Starting out, if it seems like everyone is 10 or 20 paces ahead, you can catch up,” she said. “If you have that grit and are willing to work hard, you can do this. This is like anything else: it can be learned.”

Taylor, like Twomey, grew up far away from the sea or major waterway, yet found her way to the Merchant Marine Academy. After she finished, she started out as a deckhand, working 15 years on workboats. Then in 2011, she got into the Houston Pilots’ training program. Taylor went on to recount several instances from the Houston Ship Channel that highlighted the high level of professionalism in both brownwater and bluewater operations.

Felder, then, closed the panel’s discussion with a word of exhortation, encouraging women and men alike in the maritime industry to seek out mentors and serve as mentors to others. In so doing, they learn from others and help share years of experience with newcomers.

“I think mentoring is a very important thing,” Felder said. “It made a huge difference to me.”