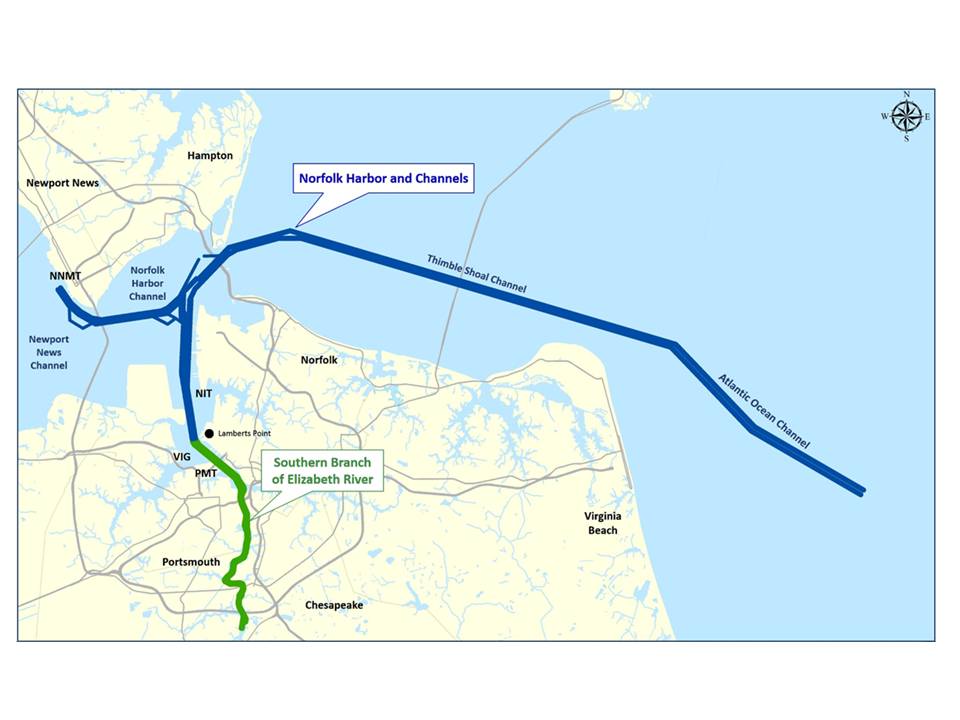 Ahead of a deepening project to expand Norfolk Harbor’s shipping channels, the U.S. Army Corps of Engineers and the Virginia Port Authority are continuing design measures with the intention of awarding an initial dredging contract by January 2020.

An official design agreement between the port and the Corps was signed in February 2018. Through a Memorandum of Understanding issued in July 2018, the port was able to accelerate the schedule and complete some design work, getting its credit for its share of the funding, before a cost-share agreement was in place.

The first year of funding for the design phase was authorized in the Corps fiscal year 2019 funding. The port has done about one year of additional design work ahead of that.

In June 2018, the Corps and the port completed an Integrated General Reevaluation Report and Environmental Assessment. The project was originally authorized in the Water Resources Development Act of 1986. The reevaluation report was needed to update the original study, completed July 1985. The original authorization included channel deepening from 45 to 55 feet within most of the project area and 57 feet within the Atlantic Ocean Channel. Since being authorized all areas were deepened to a depth of 50 feet with the exception of the Atlantic Ocean Channel, which was deepened to 52 feet.

The upcoming deepening project will be phased, and timing will depend on funding appropriations. Including the preliminary design, Cathie Vick, Port of Virginia chief public affairs officer, estimated that the project should take about 6.5 years. She also said that permitting expires after three years, so phases will be timed to adhere to those windows. “We are ready to move forward with a big package to go out this summer to start construction,” Vick said. The design work will continue throughout the project, in preparation for additional phases.

The initial feasibility report was based on some “limited computer modeling and rules of thumb for channel design,” said Robert Pretlow, project manager, Corps Norfolk District. Now, the pre-engineering and design (PED) phase will identify if all the dimensions are appropriate.

The studies include ship simulations. These have been led by the port, in partnership with the Corps Engineer Research and Development Center (ERDC) and the Virginia Marine Institute of Science. The program runs simulations of the largest vessels expected in the channel. Pilots from the Virginia Pilots Association run the simulator and various models. Pretlow said the modeling looks at the various dimensions, and also vessels passing one another and the channel width dimensions.

The ship simulations also consider the hydrodynamic effects of the tidal currents, the symmetry of the bottom or impacts from different weather conditions. The simulations are informed and operated with surveying data and long-term trends in the harbor. Most of the ship simulation work was complete as of early March, and Pretlow said a final report should be available soon.

The channel is surveying on a regular basis for maintenance dredging. Most of the areas were last surveyed between April and July 2018. The Norfolk District does sometimes contract out this work, but most hydrographic surveying is done in-house.

In May 2018, the Norfolk District welcomed a new survey vessel, Ewell, to its fleet. The 61-foot catamaran has multibeam sonar technology and a crane capable of lifting 4,500 pounds. The vessel does both surveying and marine debris removal. With a top end speed of more than 34 knots, the 1,970-horsepower twin-engine, jet-propelled Ewell is the fastest vessel in the district’s fleet. The vessel’s speed allows the survey crews more time to collect data. In some cases, the Corps said Ewell can shave off up to two days off survey projects.

The port has also conducted archeological resource surveys, which will be ongoing as the project moves to different areas of the channel. Historical artifacts from native American populations, English settlers and war time activities could be present. “Our belief is that most have been uncovered,” Vick said. The main channel has all be excavated and surveyed. Some of the widening areas might need a closer look. That work is done in conjunction with the Virginia Department of Historical Resources, using side scan sonar equipment to map the bottom and, in some cases, divers. In addition to historical artifacts, these studies will also investigate for unexploded munitions or old mines in the channel. Pretlow said the Baltimore District, experts in this area, will eventually help in preparing the analysis program.

In the harbor, most of the sediment is fine silt or clays in the inner harbor and Thimble Shoal Channel. Approaching the Chesapeake Bay Bridge and moving east, especially in the Atlantic Ocean Channel, the sediment gets more coarse and sandy. The harbor includes no rock bottoms or contaminated sediment.

Sediment analysis will validate that the dredged material meets sediment testing requirements for placement at the Norfolk Ocean Disposal Site and the Dam Neck Norfolk Ocean Disposal Site, which are authorized ocean placement sites for the Atlantic Ocean Channel and the Thimble Shoal Channel dredged material. Material may also be placed at the Craney Island Re-handling Basin, or used at surrounding beaches for renourishment.

Vick said the sediment sampling in Thimble Shoal West has been completed and the full report is expected by May. “That’s one of the things that’s only good for three years,” she said. “We’ll do that in phases, so we don’t get ahead of ourselves.”

The design for the rock cover of the Chesapeake Bay Bridge Tunnel will also get evaluated. Deepening the channel will reduce the amount of material over the tunnel. Right now, Pretlow said it is sand and natural material. “What we had proposed several years ago was placing a rock cover on top of the tunnel for protecting it from ship and anchor damage,” Pretlow said. “We’re revisiting that now to see if we should use rock or something else.”

In late February, the Corps also completed a value engineering study to look at scheduling and how that will affect cost and efficiency. Pretlow said the Corps has some suggestions on when they dredge various segments of the project. “That could have an impact on how long we dredge and when it will be completed,” Pretlow said. The changes are ultimately driven by cost savings, he said. The Corps value engineering final report is expected in April.

“We are trying to award the first contract in the January 2020 timeframe,” Pretlow said.