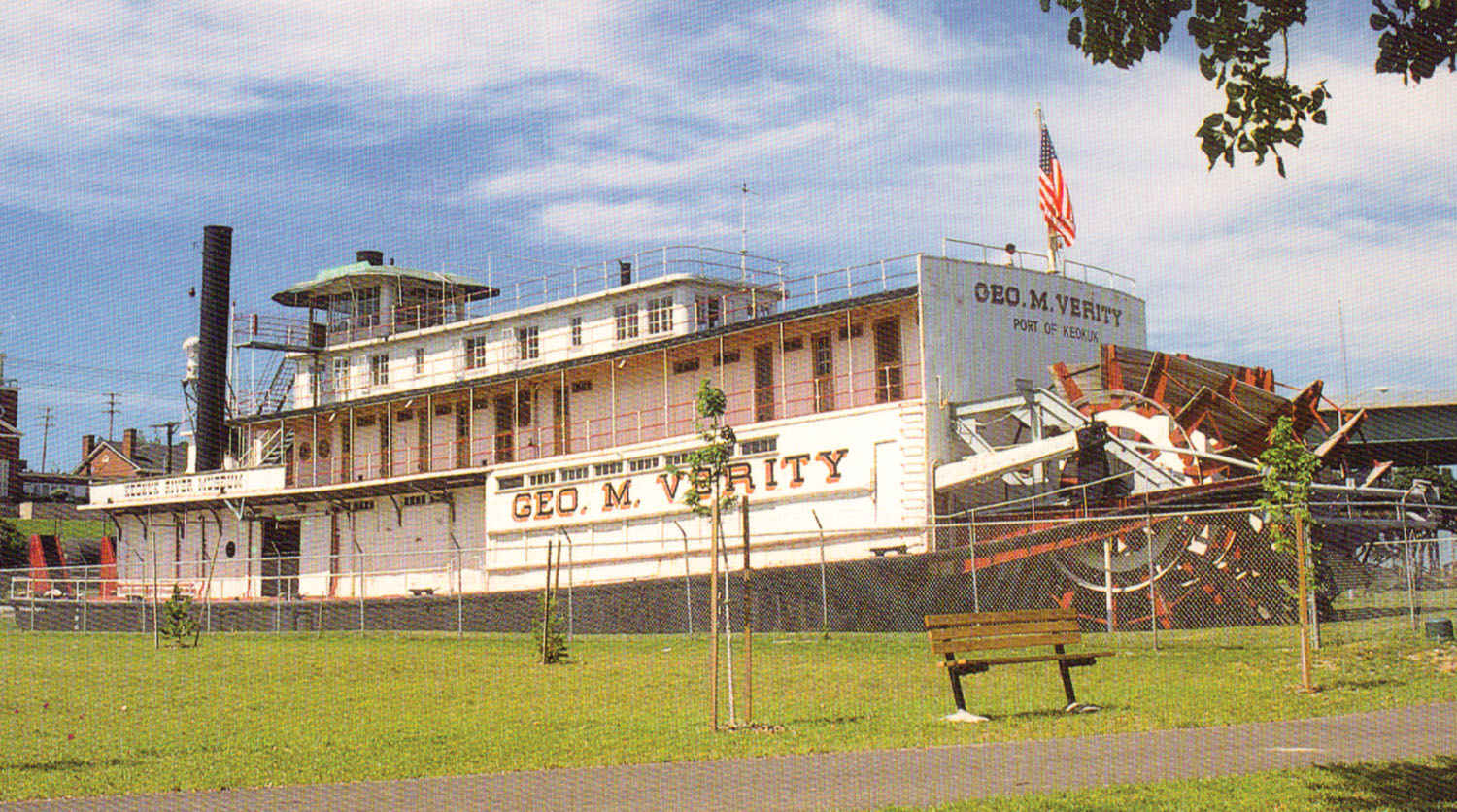 In the early spring of 1961, the retired steam towboat George M. Verity became a museum at Keokuk, Iowa. The sternwheeler was floated into a basin and placed upon a concrete base, high and dry, near Lock and Dam 19. For nearly six decades, the riverboat has survived floods, politics and other issues, welcoming visitors for tours from engineroom to pilothouse. For many years, the late Robert L. Miller, longtime Upper Mississippi River correspondent for The Waterways Journal, faithfully served as museum curator.

The Verity was built as the S.S. Thorpe by the Dubuque Boat & Boiler Company in 1927. Originally owned by the Inland Waterways Corporation, the boat was named for Samuel S. Thorpe, first president of the Upper Mississippi Barge Line Company, which was founded in 1925. By 1928, the Thorpe was part of a fleet operated by the Federal Barge Line. The hull, built of copper-bearing steel to resist corrosion, measured 130.1 feet in length by 35.1 feet in width. Two Foster Wheeler watertube boilers supplied steam to the Nordberg condensing engines, which have 15-inch high-pressure cylinders and 30-inch low-pressure cylinders with a 6.5-foot stroke. All of the engine parts and valve gears were case-hardened so that no replacement parts were ever necessary. Cabins and bath facilities for crew and guests were located on the boiler deck. The total cost of the steamboat was $175,000.

During the winter of 1930, alterations included raising the pilothouse and lengthening the smokestacks. Operated on the Upper Mississippi River, the Thorpe was involved in only one major accident when, on May 9, 1938, downbound from Minneapolis with two empty barges on a high stage of water, the towboat was caught in the swift current while rounding to above the Washington Street Bridge. Running partially aground, the Thorpe sank at the head. All crew members scrambled over the sternwheel to safety. After the riverboat was refloated, it was discovered that the hull had not been punctured and it was towed to Dubuque for repairs, resuming operations within a few weeks.

The Thorpe was sold in 1940 to the American Rolling Mill Company (ARMCO) of Middletown, Ohio, and renamed George M. Verity, in honor of company president George Matthew Verity (1865-1943). Verity built an industrial empire by getting into the steel business after operating wholesale grocery and tin roofing companies. Christened by Jeanne Hook and Jean Verity, the vessel went into the coal towing trade, with Capt. Clyde Morrow, master, and Ray Gill as chief engineer. Gill stayed in that capacity for nearly the remainder of the boat’s operating career.

During the autumn of 1945, the hull was rebuilt and widened (162 by 40 feet) by the Hillman Barge & Construction Company at Brownsville, Pa. In 1947, the conventional sternwheel of 16 bucket planks was changed to a special helical (herringbone) style paddlewheel which was jokingly referred to as looking like a lawn mower!

Decommissioned in 1960 when ARMCO disbanded its river operations and began shipping coal by rail, the Verity was purchased for the sum of one dollar through a museum commission at Keokuk. The American Commercial Barge Line and Sioux City-New Orleans Barge Line towed the steamboat from Huntington, W.Va., to Keokuk.

Caption for photo: The retired steam towboat George M. Verity has been a museum at Keokuk since 1961. (Keith Norrington collection)