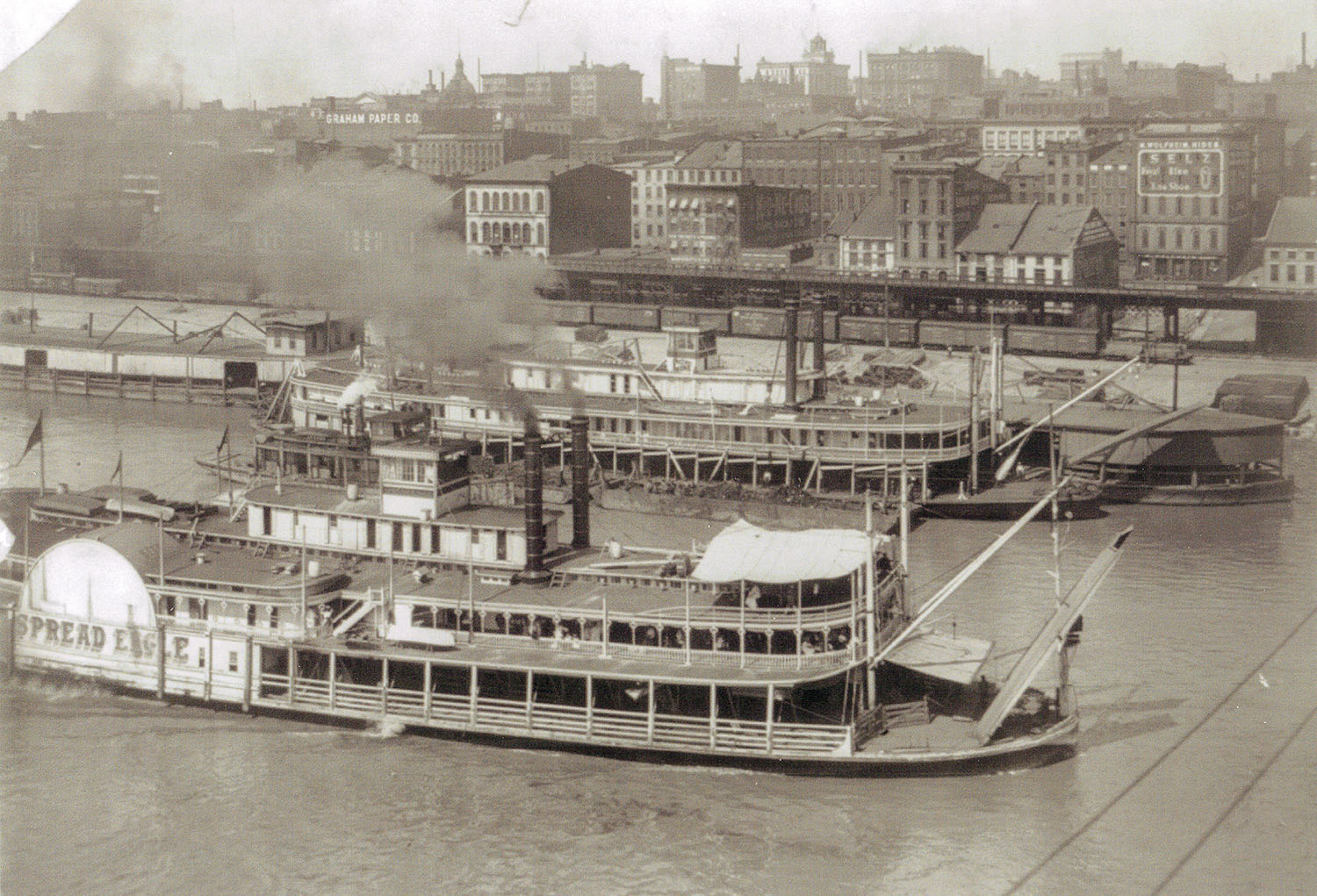 Along The St. Louis Levee

Undoubtedly taken from the Eads Bridge, this week’s Old Boat Column image presents a busy scene at St. Louis in 1903.

In the foreground is the steamer Spread Eagle. One of five boats to carry that name, this sidewheeler was owned by the Eagle Packet Company. Originally named City of New Albany, the boat was built by the Howard Shipyard at Jeffersonville, Ind., in 1892. The wood hull measured 225 feet in length by 35 feet in width. Three boilers supplied steam to engines having 20-inch cylinders with a 7-foot stroke.

The boat was lost after sinking to the pilothouse below St. Louis on October 21, 1916. All passengers and crew were saved.

Alongside the wharfboat in the photograph, taking on coal, is the steamboat Dubuque. This large sternwheeler was originally known as the packet Pittsburgh. Built in 1879 by the Cincinnati Marine Ways, the vessel was owned by the Cincinnati & Pittsburgh Packet Company, of which David Gibson was president.

The boat was constructed on a wood hull measuring 250 feet in length by 39.2 feet in width and having a depth of 5.8 feet. Four boilers (with six flues) supplied steam to engines having 21-inch cylinders with a 7-foot stroke. The paddlewheel was 21 feet in diameter and had bucket planks 28 feet long. The riverboat reportedly drew 24 inches of water when new, and had a reputation for making speedy trips between Cincinnati and Pittsburgh.

By 1882, the boat was making trips between Pittsburgh and St. Louis. Shortly thereafter, the Pittsburgh was sold to the famous Diamond Jo Line and headquartered at St. Louis for service on the Upper Mississippi River.

The infamous cyclone of 1896 that struck the St. Louis waterfront demolished the upper works of the boat. The hull was taken to Dubuque and rebuilt with new measurements of 257.2 feet long, 40.6 feet wide and a depth of 6.1 feet. The engines were replaced with new ones of the original size and three new boilers were installed. The superstructure was rebuilt and the name was changed to Dubuque; the boat continued operating for the Diamond Jo Line. Capt. William Burke served as master for 27 years under both names.

In July 1901, the steamer sank after ripping a 142-foot-long hole in the hull at Keithsburg, Ill. The riverboat was quickly raised, repaired and service was resumed.

The Streckfus Line purchased the boat in 1910 and continued packet service until 1917, making a charter trip in the spring of 1912 to the Shiloh Battlefield for the St. Louis & Tennessee River Packet Company.

During the winter of 1919–20, the boat was taken to Keokuk, Iowa, for renovations, with the work completed at Davenport. The staterooms were removed to make room for excursionists and four new boilers were installed. The sternwheel was modified to measure 25 feet in diameter with 30-foot bucket planks having a dip of 24 inches. The pitmans were 24 feet long. There were four main rudders with two monkey rudders (aft of the wheel) to aid in steering the big sternwheeler, which was renamed Capitol.

From 1920 until 1941, the Capitol traversed the Mississippi from St. Louis to St. Paul, usually wintering in New Orleans. After a long and fruitful career, the riverboat was retired, dismantled and scrapped in 1945 at the St. Louis levee.