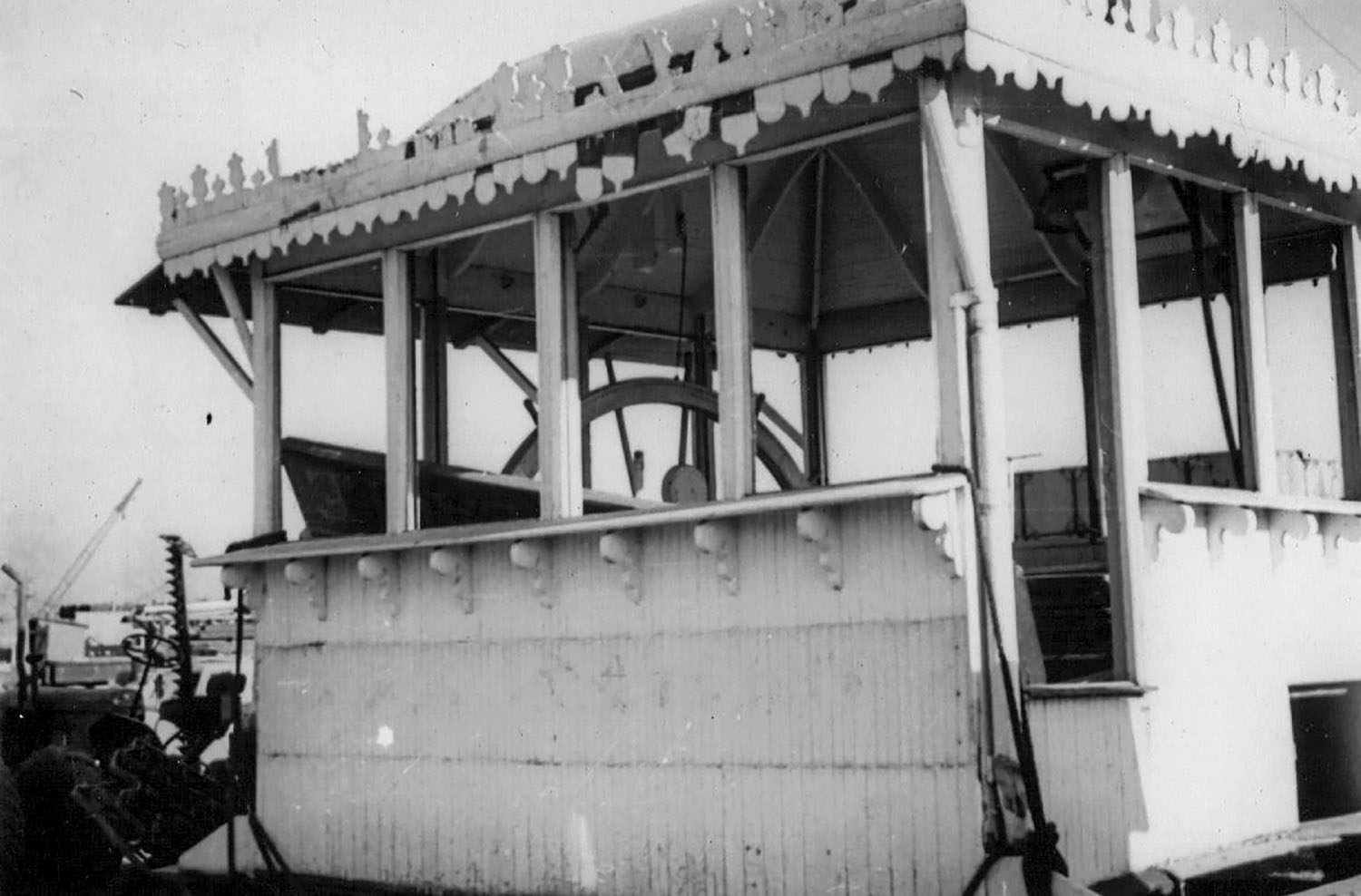 Revival Of A Riverboat Pilothouse

The cotton packet Wm. Garig was a petite, wooden-hulled sternwheeler launched at the Howard Shipyard in Jeffersonville, Ind., on Saturday, May 7, 1904, at 3:15 p.m., according to Day Book No. 9.

When the January 29, 1918, ice gorge destroyed most of the Eagle Packet Company’s fleet, which had sought refuge on the Tennessee River in the Duck’s Nest near Paducah, Capt. Henry Leyhe purchased the Garig at New Orleans and, after Capt. W.H. “Buck” Leyhe piloted the boat to its new St. Louis home, alterations were made at Rohan’s Marine Ways at Cardondelet. The boat was renamed Golden Eagle.

When the freight business declined, the vessel was again altered to become a tourist steamboat, beginning cruises in 1935.

On June 14, 1941, the boat sank at Chester, Ill., after striking a submerged dike, but it was quickly nosed into shore, and all passengers and crew safely walked ashore. After being high and dry for several months, a rising river freed the beached steamboat, and it was taken to Paducah for repairs.

During the World War II years, the Golden Eagle lay idle at the St. Louis levee when the boilers became leaky, and there was no chance of replacement. The boat was sold to new owners in 1946, and then again in 1947 to Herman T. Pott, president of St. Louis Shipbuilding & Steel, and other investors. A complete renovation was undertaken before the sparkling steamboat departed on May 17 for its initial cruise with Capt. Buck Leyhe aboard as a special guest. Some eight hours after departure, the steering gear jammed, and the boat ran onto Grand Tower Island, tearing a 5-foot hole in the hull. Passengers and crew were safely rescued by the towboat Linda Chotin.

Wrecked beyond repair and abandoned by the owners, the Golden Eagle was scrapped by the U.S. Army Corps of Engineers. Through the enthusiastic and persistent efforts of Ruth Ferris, a St. Louis river historian and educator who had made numerous trips on the boat, the pilothouse was lifted almost totally intact from the wreckage and placed onto a barge. Taken to the Corps of Engineers base at the foot of Arsenal Street, the artifact was sold at auction. On June 5, 1948, the Community School, of which Ferris was fifth grade teacher and assistant principal, submitted the winning bid of $257 for the “sky palace” of the revered riverboat.

Hauled on a lowboy with a police escort and utility crewmen to lift power and trolley lines, the pilothouse made a 10-mile journey from the river to the school campus on January 15, where it was lifted by crane onto a prepared foundation. After repairs and painting, a dedication ceremony was held on May 27 at which Capt. Buck Leyhe was the guest of honor. The fifth grade presented a play, “On Board the Golden Eagle.” Guests were asked to bring a picnic supper to make the occasion resemble an old-time river excursion. The hurricane deck was outlined by a gingerbread railing, and various skits portrayed life aboard the boat, including sounding the river depth with the actual lead line used on the “Goldie,” as the boat was affectionately known. The program concluded with the singing of a song, “Golden Eagle,” composed especially for the occasion. Water from the five rivers (Ohio, Mississippi, Illinois, Tennessee and Cumberland) plied by the boat was sprinkled across the pilothouse as the formal christening.

For the next 14 years, the pilothouse was utilized for the teaching of St. Louis and river history, as well as being shared with groups and individuals interested in steamboating.

In November 1961, the pilothouse was gifted by the school to the Missouri Historical Society, where Ferris had become curator of the river collections following her 1957 retirement. Removed in sections to the Jefferson Memorial Building in Forest Park, the pilothouse became the crown jewel centerpiece of the elegant new River Room, which opened to the public on May 2, 1962. Among the first visitors to the pilothouse were former Golden Eagle officers Capt. Billy Clark and Chief Engineer Wesley Martin, who exclaimed delightfully, “It’s old Goldie big as life!”

After more than two decades, museum officials moved and altered the artifact to make space for an elevator. In 1995, the pilothouse was dismantled and placed into storage. After 25 years of hibernation, we are delighted to report that the pilothouse has been re-assembled and, after undergoing a thorough restoration (thanks to curator David Lobbig) is prominently displayed in The Mighty Mississippi exhibition, which runs through April 18, 2021, at the Missouri Historical Society.

Caption for top photo: Pilothouse of the Golden Eagle shortly after being salvaged from the wreck in 1947. (Photo from Keith Norrington collection)