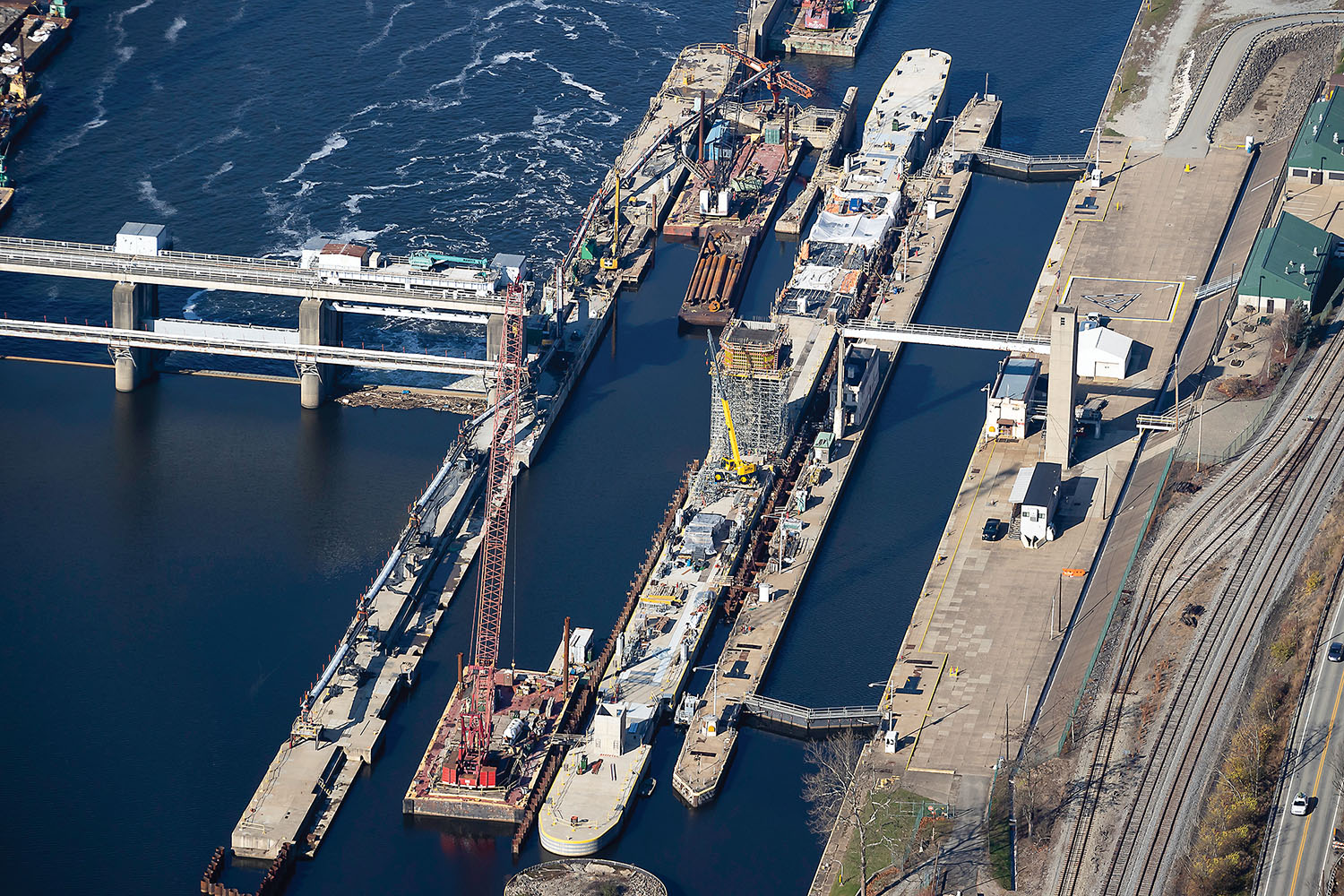 A project to modernize and improve navigation on the Monongahela River in southwestern Pennsylvania is now 68-70 percent complete after more than 25 years of work.

The Lower Mon Project could be substantially complete as early as late 2023 or early 2024, said Stephen Frost, project manager for the Pittsburgh Engineer District. The project involves replacing the fixed-crest dam at Locks and Dam 2 at Braddock with a gated dam, removing Locks and Dam 3 at Elizabeth, and constructing a new, larger lock at Locks and Dam 4 at Charleroi. Locks 2, 3 and 4 on the Monongahela in Allegheny, Washington and Westmoreland counties are the three oldest currently operating navigation facilities in the country and experience the highest volume of commercial traffic on the Monongahela River Navigation System.

“We’re taking three locks and dams and making them into two locks and dams by removing the bottleneck at Elizabeth so that it’s just a navigable pass,” said Frost of what the project does in a nutshell. “Basically, it would save one entire lock-through for the towboat industry.”

Monongahela pools 2 and 3, each of which normally encompasses roughly 15 miles, would become a 30-mile stretch of river where there are no lock-throughs, Frost said.

The Lower Mon Project was first approved in the Water Resources Development Act of 1992, with the first construction funding becoming available in 1995. At the time, it was estimated to cost $750 million. So far, approximately $900 million has been invested to date, and the project total at completion is now estimated to be $1.2 billion.

One of the project’s first major milestones was the replacement of the nearly 100-year-old fixed-crest dam at Braddock Locks and Dam with a gated dam in 2004. The gated dam allows control of the navigation pool much more efficiently than the fixed-crest structure, Frost said. Having gated dams at Braddock and Charleroi and the elimination of the fixed- crest dam at Elizabeth will also allow for more control of the water elevation in the newly created 30-mile pool, Frost said.

The project’s focus has now turned to building the new and larger river lock chamber (720 by 84 feet) at Charleroi’s Locks and Dam 4. Work on the chamber closest to land at Charleroi is deferred until the 2050s. Other ongoing work includes extending the Charleroi dam stilling basin, inland river dredging, some public shoreline facility relocations and ultimately also the removal of lock and dam 3 at Elizabeth, Frost said.

“Basically, what we’re doing is modernizing and improving the reliability of the Lower Monongahela River navigation structures that were built between 1903 and 1906,” he said.

To that end, three contracts are underway on the project. Two of those are for 27 mass concrete monoliths for the recently completed middle lock wall at Locks and Dam 4 at Charleroi.

The M22-M27 contract (comprising middle wall monoliths 22 through 27) was awarded in August 2014 to the former Joseph B. Fay Company, now part of the ICON family of companies. The $89.3 million contract was substantially complete as of July 2020.

Trumbull Corporation and Brayman were awarded the River Chamber Completion Contract as a joint business venture. The $267 million contract’s middle wall was substantially complete as of November 2020. The Corps chose to execute the base contract and all five options of this contract. With the first three options substantially completed, the remaining parts of the contract focus on the last two options, which involve closing off the lock chamber and preparation to dewater it to finish in-chamber construction work, Frost said. Work on the fourth option includes the in-chamber work, and that work is just starting. Frost expects construction on the final of the five options on the contract to begin in 2022. When considered separately, the Charleroi portion of the Lower Mon project is 76 percent complete, Frost said.

The new river chamber at Charleroi and the elimination of the Elizabeth Locks and Dam will prevent the typical double lockages for tows now having to wait their turn to lock through.

“That’s a bottleneck right now between Charleroi and the Ohio River,” Frost said.

Roughly 1 million tons of material pass through the Charleroi locks each month, with the majority of that being coal, Frost said. Other major cargoes include petroleum products and aggregates.

Once the work at Charleroi is complete, Frost said, work will begin to breach the dam at Lock and Dam 3 at Elizabeth and finally to make the navigable pass-through, with that contract expected to be awarded in early 2022.

Frost said with so much work having gone into the Lower Mon Project over the past decades, it’s good to see it moving steadily forward toward its completion. He added that the work is an important part of an inland waterways system that requires an integrated approach, and that the Corps continues to move forward with other important projects as well, such as its Fiscal Year ’21 Work Plan, which includes work on the Upper Ohio River Project. Most of that $22 million in funding will go toward the Montgomery Locks and Dam Project, also in the Pittsburgh Engineer District.

Caption for top photo (click on image for full photo): An aerial shot shows ongoing work at Monongahela River Locks and Dam 4 for the Lower Mon Project, which is expected to be complete in late 2023 or early 2024 after more than 25 years of construction involving three separate dams. (Photo courtesy of Pittsburgh Engineer District)