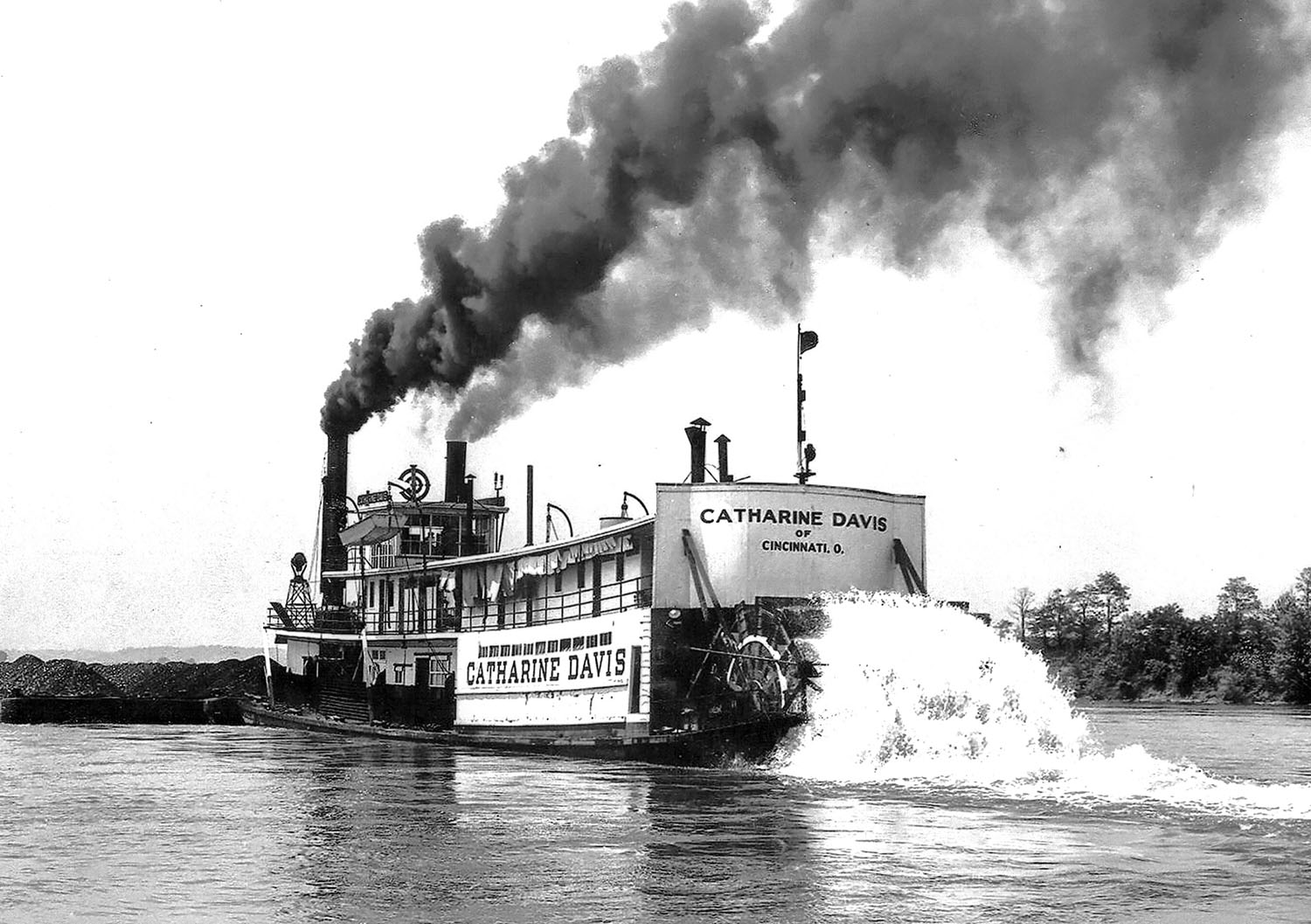 Built at Marietta, Ohio, in 1896, the first steam towboat Catharine Davis had a hull constructed of Oregon fir that was 135 feet long and 26.5 feet wide. The engines, built by the Marietta Manufacturing Company, had cylinders of 10 and 17.5 inches, with a stroke of six feet.

Owned by Capt. Steve Davis, of Marietta, the vessel was named for his mother. Capt. Davis did job towing and had also owned the towboats J.H. McConnell, Jim McConnell and John Mills. The boat arrived at Pittsburgh on its first trip on June 12, 1896.

The Davis was sold to the Smiley Towboat Company, of Catlettsburg, Ky., on March 15, 1901, and was used to tow timber out of the Big Sandy until the sternwheeler was purchased by the Island Creek Coal Company at Huntington, W.Va. The firm operated the vessel between Huntington and Cincinnati, rebuilding the boat in 1916. Capt. James Rose was an early master of the Davis, followed by Capt. James Rowley Jr. and Capt. J. Emory Edgington, who were all well respected on the river.

On October 29, 1910, the Davis struck an underwater obstruction while underway in the Huntington harbor and tore a hole in the hull just aft of the boilers. The riverboat sank in seven feet of water, but it was quickly raised, repaired and returned to service. The steamboat was dismantled in 1927.

The subject of this week’s Old Boat Column—the second towboat Catharine Davis—was built in 1928 at Jeffersonville, Ind., by the Howard Shipyard.

Constructed on a steel hull measuring 133.3 feet long, 26.6 feet wide and having a depth of five feet, the machinery from the previous boat of the same name was recycled for the new vessel. Three return-flue boilers provided the steam.

Capt. J. Emory Edgington was master in 1935 with Capt. Raymond Young and Capt. Russell Riley as pilots. The engineers were Ray Gill and Alex McGee. Capt. Pat Allen became master in 1937 and remained in the position for many years. Capt. Edgington received his original license in 1889 and eventually enjoyed the distinction of being one of the oldest pilots on the river, finishing his 70-year career as a pilot on the excursion steamer Avalon (today the 107-year-old Belle of Louisville) in 1961. He passed away on November 14, 1966, at the age of 96. The final master of the Davis was Capt. Ned Hamilton, who had formerly served as pilot.

The towboat was laid up and dismantled at Huntington in 1949.

As various river museums are getting back into the groove, Howard Steamboat Museum director/curator Travis Vasconcelos has announced that the 2021 offering of the popular “River Ramblings” educational lecture series will be a riverboat model extravaganza. Scale models from several clubs will be exhibited, and talks will be presented by noted modelers John Fryant, Tom Keller and Marty Richardson.

Admission is $10. The museum will be open for tours (included in admission fee), and refreshments will be available for purchase in the restored carriage house. A “Riverboat Rummage” sale will also be open, selling books, T-shirts, trinkets and other river memorabilia. All proceeds benefit the museum operating fund.

Mark your calendar for Sunday, October 10, from noon–4 p.m. EDT. For further information, visit the museum website at www.Howardsteamboatmuseum.org.