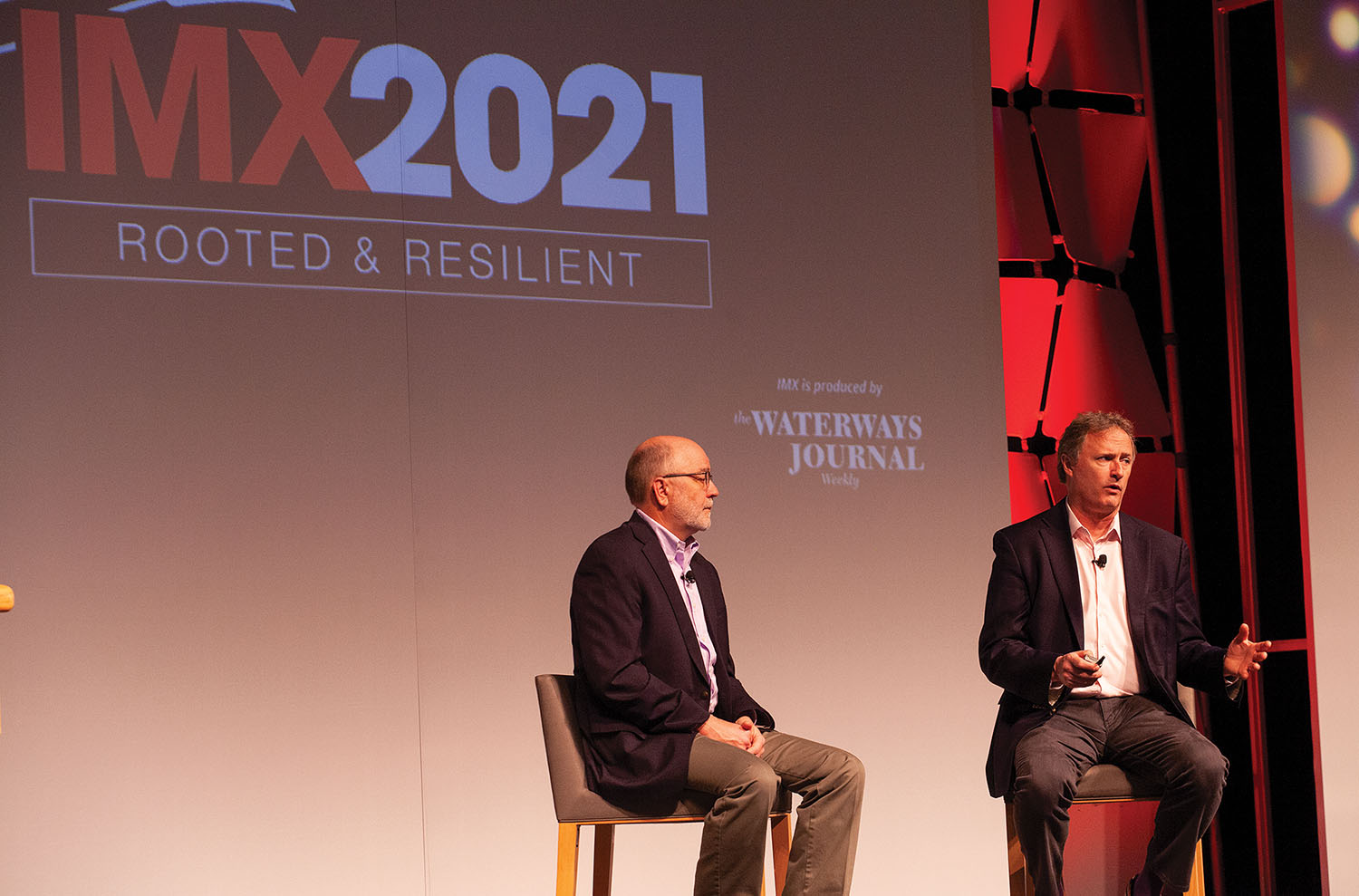 IMX State Of The Industry: Economy Roaring Back, With Bumps In Road

The post-pandemic boom is taking off, despite bumps and unevenness in some sectors, and should benefit barged commodities overall. That message, very welcome to attendees, was the highlight of the keynote State of the Industry address at this year’s Inland Marine Expo (IMX), which was held in St. Louis May 24-26 at the Dome at America’s Center. It was held in conjunction with FreightweekSTL, which extended through May 28 and included virtual as well as in-person events. Some presenters at IMX education sessions and FreightWeekSTL events also took part virtually.

This year’s keynote talk at IMX was given by Ken Eriksen and Roger Bernard, both of IHS Markit. Eriksen, senior vice president and head of client advisory and development, energy and transportation and policy at IHS Markit, is a veteran of many appearances at the IMX and other marine, barge- and ag-related events. Before joining the company, Eriksen worked for USDA’s National Agricultural Statistics Service and its Agricultural Marketing Service.

Bernard is a senior policy analyst at IHS Markit who grew up on a grain and livestock farm and has been an ag journalist and farm broadcaster, among other occupations.

The theme of this year’s IMX was “Rooted and Resilient,” and Eriksen began with a look at the global macroeconomic outlook. Both the global and national economies are expanding rapidly, and U.S. companies are having a hard time finding enough workers, due in part to the still-flowing stimulus and expanded unemployment payments. In fact, 21 states have committed to pulling out early from the expanded jobless benefits that were a part of those COVID-19 stimulus bills out of concern for the effect they are having on the labor pool.

The spending that is fueling the boom stems from the improved financial position of many American families. Stimulus payments kept many afloat, and payments to farmers for relief from both ag tariffs and the COVID-19 pandemic even raised farm incomes slightly during 2019, until rising corn and soybean prices were able to take over. The savings rate under COVID has been “astronomical,” said Bernard, and many families have paid down their credit card debt. Not only do they have more savings to spend, but they also have more credit power.

Eriksen displayed a chart indicating when various countries either have returned or are due to return to their pre-pandemic levels of gross domestic product (GDP). China hit that target in the second quarter of 2020 (according to its own figures), while Japan isn’t expected to get there until the fourth quarter of this year. The Eurozone as a whole won’t get there until the second quarter of 2022.

China has been bringing back its hog herds, devastated by African swine fever, to 2019 levels, and replacing their former feedstocks of backyard scraps with healthier grain feeds. Pork supplies are an item of national security concern for China, the world’s largest hog raiser and pork consumer, Eriksen said. According to Statista, as of April China’s hog herd numbered more than 400 million. That has resulted in a lot of imports of both corn and soybeans from the U.S. and other countries.

The economic expansion isn’t happening evenly across the globe. Argentina recently suspended meat exports from seven of its meat-processing plants due to new outbreaks of COVID-19. It’s not expected to reach 2019 levels of GDP until the first quarter of 2025, but Eriksen said that may reflect the lingering effects of problems in its economy that predated the pandemic.

In Washington, D.C., the partisan divide continues, with Vice President Kamala Harris having to cast the tie-breaking vote in an evenly divided Senate, and Democrats having to rely on a maneuver called budget reconciliation to get some bills passed. The Democrats enjoy a narrowed margin in the House. If history is a guide, the opposition party will pick up seats in the House and Senate in the 2022 elections, but a number of incumbent Senate Republicans are retiring, and it’s hard to predict what will happen. Bernard said it could be a “tall order” for the Republicans to retake the Senate, but in any case, Congress will “come to a grinding halt” as the midterm elections get close. The two parties are currently trading counter proposals for an infrastructure bill that may not reach agreement for weeks or months.

On the other hand, said Bernard, this year has seen the return of earmarks, albeit under another name, “member-directed spending.” This year saw 2,400 requests from members for items to be attached to the House transportation bill. The administration’s budget request was due May 28 and is expected to reveal more about its infrastructure priorities. The spending proposals could be consolidated or split into 12 separate spending bills to avoid a possible government shutdown by September. In whatever iteration infrastructure makes its appearance, rural broadband is expected to be a big item.

Eriksen noted that the barge fleet shrank during the pandemic, to just over 22,000.  He said the covered fleet “took a big hit” between March and May during 2020 on low volumes. Meanwhile, its age is creeping back up, although it is expanding modestly. But demand for barged commodities is surging on record grain export demand. A number of grain elevators and facilities in the Lower Mississippi River have expanded and invested in additional capacity for what is expected to be continued export demand for U.S. grains.

The open barge fleet is at its smallest in decades, as coal continues its decline. The downward slide of coal over many years has been punctuated by short upward spikes due to temporary market conditions such as cold winter weather or upticks in the thermal coal export market. Coal is a convenient “flex” energy source that is easily turned to in times of spiking energy demand. Indeed, that is one of the arguments coal proponents use in defending their industry. While these upticks—Eriksen called them “head fakes”—may be welcome, they do not change the picture of long-term coal demand decline, he said.

Bernard said he believes coal may have another of these temporary export opportunities during the coming boom. He noted that tensions over coal have made West Virginia Sens. Joe Manchin and Shelley Moore Capito into “kingmakers.” Capito is a moderate Republican and Manchin a moderate Democrat; both want to protect their state’s coal miners and therefore balk at some of Biden’s energy proposals.

Eriksen noted that the Corps has had difficulties in releasing its barge commodity data over the past three years.

The effects of the pandemic on petroleum were more immediate and drastic, as are the effects of the shutdown of the Dakota Access pipeline, which shunted its intended cargoes to at least some barges along with rail. But the sector has since recovered, and fuel consumption is almost at pre-pandemic levels. Airlines are coming back, although they are constrained by supply chain issues, as are many other industries. Newbuilds are still constrained, and more tank barges may “age out” of the petroleum and chemicals fleet due to strict maintenance requirements of customers rather than being retired outright.

In energy policy, both presenters agreed that it will be more important than ever for the barge industry to tell its story of lower carbon emissions. That story “is your biggest calling card” in Congress, Bernard said. In ag policy, carbon sequestration is “the wild West” as various proposals are pursued by private hedge funds and other plays in the ag tech field. But an enormous amount of work needs to be done in gathering data before reliable, sustainable carbon markets can be set up in the ag sector.

During the Q&A portion, Eriksen noted the troubles that agricultural container users have been having. About 150,000 containers a year are used to ship specialty corn and soybeans, with about 200,000 containers overall shipping all ag products. They have had to contend with a container imbalance because carriers, after losing money for years, are taking advantage of the boom to send empty containers back to China to quickly reload more lucrative cargoes of consumer goods and electronics, which can be worth up to 10 times the value of even premier agricultural goods per container. Bernard emphasized that the Federal Maritime Commission has been investigating whether these practices are allowed under the Shipping Act of 1984. Eriksen noted that “huge slugs” of new containers are being built in China right now, but most observers expect difficulties with container availability to continue through the summer and into the fourth quarter.

The amount of driving Americans are expected to do during this summer’s driving season relates directly to how much corn will be needed for blending ethanol. Eriksen called the renewable diesel policy a “wild card” and suggested the U.S. could be short of RFA feedstock by 2022. IHS Markit is predicting a 16 billion-bushel corn crop.

IHS Markit sees more corn demand this year than does the USDA. The U.S. is on pace for a record in new corn crop sales, and bad weather has left Brazil’s second corn crop in disappointing condition, bringing business to the U.S. IHS Markit is forecasting a total Brazilian corn crop of 93 million tons, vs. the USDA’s prediction of 102 million tons. Eriksen said Brazil is transitioning away from sugarcane to corn as an ethanol feedstock.

IHS Markit sees steel prices dropping late this summer or early fall, even though steel tariffs remain in place, and the administration isn’t hurrying to get rid of them soon. The high steel prices are limiting new barge construction, while corresponding high scrap steel prices should encourage retirements among the respective fleets, Eriksen said.