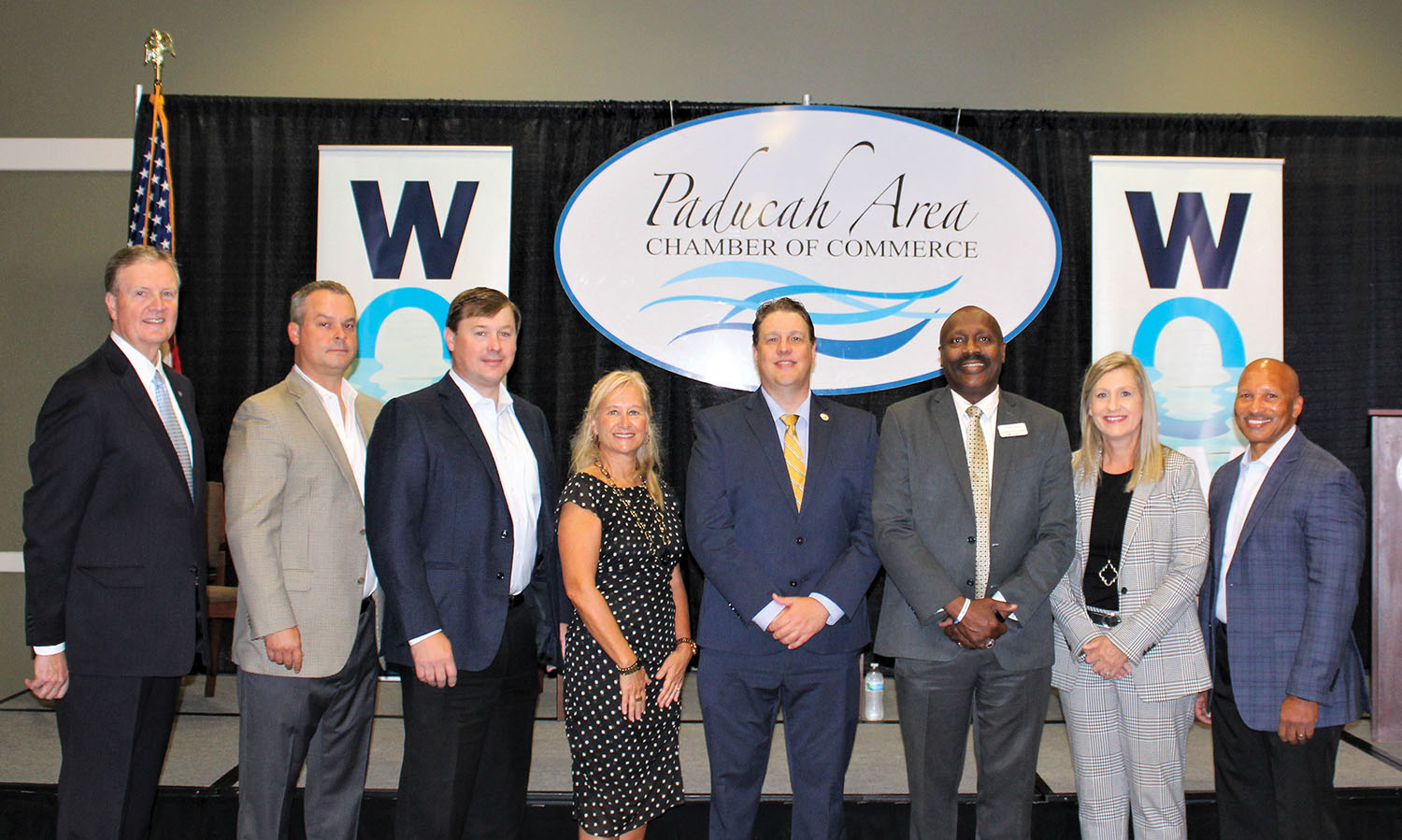 Maritime industry representatives with connections to Paducah, Ky., discussed the roles they play within the community during the Paducah Area Chamber of Commerce’s October 14 Power in Partnership breakfast.

Each began with a brief introduction to introduce his company to the larger business community.

Dorsey mentioned how a study was done of multiple potential locations for the Inland Waterways Gateway Office before the announcement in 2018 that it was coming to Paducah.

“Paducah came out on top, and that was because of its central location, its inland waterways carriers located here and headquartered here and the ability for the Maritime Administration to interact with stakeholders to continue to build infrastructure on our inland waterways,” he said.

Marquette Transportation is headquartered in Paducah. Judd said it was founded in the late 1970s and moved to Paducah in the early 1990s. The company has about 115 land-based personnel working out of its Paducah office in the Paducah Commerce Park complex off U.S. 62.

The company is one of the largest providers of towing services throughout the system with 135 boats ranging from 10,000 hp. boats on the Lower Mississippi River to 2,000 hp. boats in the Gulf Intracoastal Waterway. That represents a base of about 1,500 mariners, of whom about 550 are drawn from Paducah and the surrounding area.

Crounse Corporation was founded in 1948 in Paducah, Ricketts said. The company has 36 towboats and about 1,200 barges, primarily serving the Ohio River and its tributaries. The company mainly moves dry bulk commodities, including coal and aggregates. It employs almost 350 people between Paducah and its Maysville, Ky., location and the surrounding areas.

Ingram Barge Company has been in existence since 1946 and is headquartered in Nashville, Tenn., but the majority of its associates, including a large percentage of its 1,500 mariners, are based in Paducah, along with operations support staff, Harrell said.

The inland waterways companies have a unique relationship to Paducah as an economic generator and a community builder, Calhoun said, before asking panelists to elaborate on that relationship.

“There is an inextricable link between Paducah and our industry,” Judd said. “There’s a reason why a lot of us are headquartered here and that those that aren’t have operations hubs here. This is, I think, the largest confluence of navigable waterways in the world: the Tennessee, Cumberland and Ohio and, a little bit further downstream, dumping into the Mississippi River, and while you might not necessarily see it behind the floodwall, there’s a ton of economic activity that comes through.”

That is not limited only to the towing companies and the cargo moving through area locks, including Kentucky Lock, but all the industries supporting them, from companies like Paducah Rigging to shipyards, fuelers and other cottage industries.

“We rely on the community, and hopefully we’re able to give back to the community in terms of economic opportunity and growth for people who are willing to get out there and work hard on a boat or within our offices.”

Harrell said when traveling far outside the region, people aren’t as familiar with the industry as they are in Paducah.

“We find a lot of partners in business here as well as people who understand and value the industry,” he said, adding, “It goes without saying that we can’t do this alone.”

Ricketts said the inland marine industry provides an opportunity many communities are looking for.

“There is a lot of opportunity in this community for employment for younger folks,” he said.

Besides that, he said, “There aren’t many industries where you can graduate high school, go to work for a company that provides a family wage at the entry level with full benefits and in a matter of six or seven years and very much in an apprenticeship fashion essentially be running your own small business with a crew of seven to 10 people dealing with multi-million-dollar assets that are fully in your charge and making six-figure cash compensation with full benefits on top of it. It can be a wonderful career opportunity.”

It is incumbent upon those in the industry to get the word out about making sure those career opportunities are clear to young people, he said.

Looking at the overall picture, Dorsey said the inland waterways system is a national treasure.

“It’s truly an economic engine for the nation, and it, again, has expansion opportunities, both to carry existing products but perhaps others as well and provide more jobs for the community both here and up and down the river system,” Dorsey said.

Judd talked about some of the most common commodities moving on the river system and the advantages the system has over rail or truck.

About 30 percent of what moves on the waterways is agriculture-related in some way. Another 45 percent consists of coal, chemicals and other natural resources.

“Steel, rock, frac sand, anything that requires a bulk commodity move is very well suited for the river system,” he said. “One thing we’re not good at and won’t compete with is Amazon Prime.”
As the crowd chuckled, Judd continued, “We set the world on fire at about 6 mph., maybe 7 if we’re lucky.”

Harrell spoke of the continuing challenge of recruiting new employees.

“It’s a very competitive environment that we’re in right now,” he said.

Ingram Barge Company has turned to new recruitment techniques and is offering retention incentives to employees who stay through the harvest, including a sweepstakes with the opportunity to win prizes such as an all-terrain vehicle and a kayak.

“I will say that we’re doing well, but we’ve had to work harder,” he said, adding that it usually means hiring 10 people to keep seven as employees.

Panelists also spoke about the importance of maintaining and upgrading the river system’s infrastructure, with Ricketts saying, “The reliability of the lock and dam infrastructure on the waterways is really the foundation that makes the waterways what it is. It allows us to take advantage of a natural resource that is unmatched anywhere else in the world. It allows us to operate more efficiently, both in terms of cost for shippers moving products on the waterways but also increasingly important from an environmental perspective. Moving products on the inland waterways is the most efficient mode of bulk transportation that we have in this nation, and it doesn’t occur without an extremely reliable infrastructure system. I think that benefits not only this community and our individual companies but this country as a whole.”

Ricketts mentioned the Kentucky Lock Addition Project, in particular. About 25 million tons of product move through the existing lock yearly, he said, and wait times have grown to 10 to 12 hours “where your vessel and your barges are just sitting.”

As a whole, he said the future of transportation on the inland waterways appears bright.

“There isn’t much question that the products we move on the waterways are only going to continue to grow in demand, and I think the waterways bring a unique aspect in being able to handle that growth,” Ricketts said. “If you invest in maintaining and modernizing the infrastructure, I would say it’s probably the only mode of transportation in the country that offers almost unlimited capacity for incremental growth.”