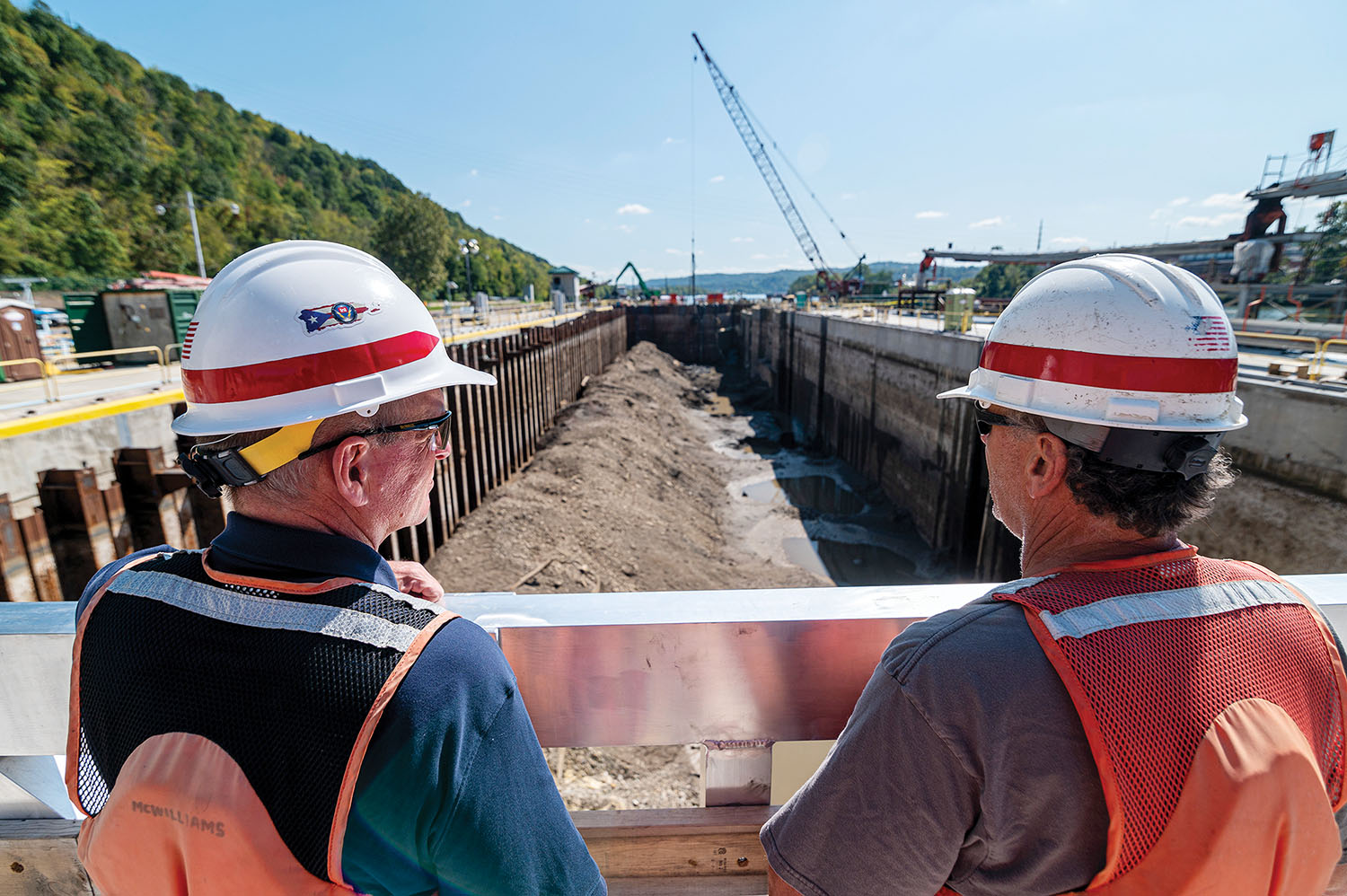 With the pumping out of enough water to fill 30 Olympic-size swimming pools, the riverside lock chamber at Charleroi on the Monongahela River has been dewatered, marking a major milestone in the project.

The project at Mile 41.5 is enlarging one of the two chambers at Charleroi to 720 feet long and 84 feet wide. Previously, the river chamber lock was 360 feet long and 56 feet wide, meaning it took three hours and multiple trips for a tow to lock through. Once completed, a typical commercial tow will be able to lock through in 40 minutes, Frost said.

Construction on the project began in 2004. When it is completed in 2024, it is projected to have cost $1 billion. It is funded half by general revenues and half by funds from the Inland Waterways Trust Fund, generated by a diesel tax on the navigation industry. In fiscal year 2020, it was included in the president’s budget for $111 million.

“That should take us to completion of the project, so we’re fully funded as we see it right now,” Frost said.

Frost estimated the work at Charleroi is about 80 percent complete. In addition to the river chamber completion project, a joint venture by Trumbull Corporation and Brayman, the work includes extending the stilling basin for the gated dam. The former Joseph B. Fay Company, now part of the ICON family of companies, is the contractor on the stilling basin extension, with that project projected for completion in November 2022.

Additionally, Frost said, extensive dredging is necessary. The disposal site is a beneficial use area about 6 miles downstream from Charleroi. The Victory Hollow placement site is a former slag dump. The dredged materials, predominantly sands and gravel, are being used to create a cap on it, revitalizing the site for potential new use.

The work at Charleroi is an essential part of the Lower Mon project, which involves work at three locks and dams. First, contractors replaced the fixed-crest dam at Locks and Dam 2 at Braddock with a gated dam. Once work at Charleroi is complete, Locks and Dam 3 at Elizabeth will be removed in favor of a navigable pass-through, creating one 30-mile pool instead of two, 15-mile pools. The work will also eliminate a regularly occurring bottleneck in river traffic at Elizabeth.

Locks 2, 3 and 4 on the Monongahela in Allegheny, Washington and Westmoreland counties are the three oldest currently operating navigation facilities in the country and experience the highest volume of commercial traffic on the Monongahela River Navigation System.

The Lower Mon Project was first approved in the Water Resources Development Act of 1992, with the first construction funding becoming available in 1995. At the time, it was estimated to cost $750 million. Approximately $920 million has been invested to date, and the project total at completion is now estimated to be $1.2 billion.

Roughly 1 million tons of material pass through the Charleroi locks each month, with the majority of that being coal, Frost said. Other major cargoes include petroleum products and aggregates.

Work at Charleroi this year prior to the chamber dewatering included the completion of mass concrete placement for the new middle wall and the construction of a new control tower on top of it.

“They’ve been working on the new control tower on the new middle wall pretty much through the summer,” Frost said. “All the concrete was placed for that, and what they’re doing now is roughing in the electrical systems and installing stairwells, things of that nature.”

Frost said the weather this year has been particularly good, with minimal high-water events hampering construction.

“We’ve been very lucky in that way, and we’re very pleased,” he said.

Additionally, he said, the project has not experienced any significant delays from the COVID-19 pandemic.

Caption for top photo: Kirk McWilliams and Shawn Soltis, resident and field engineers for the Pittsburgh Engineer District, stand over the construction project at Charleroi Locks and Dam on the lower Monongahela River in Pennsylvania on September 30. The district recently finished building the new lock chamber walls and has emptied it of approximately 20 million gallons of water to allow contractors to begin adding the mechanical inner works of the chamber. (Photo by Michel Sauret/Pittsburgh Engineer District)