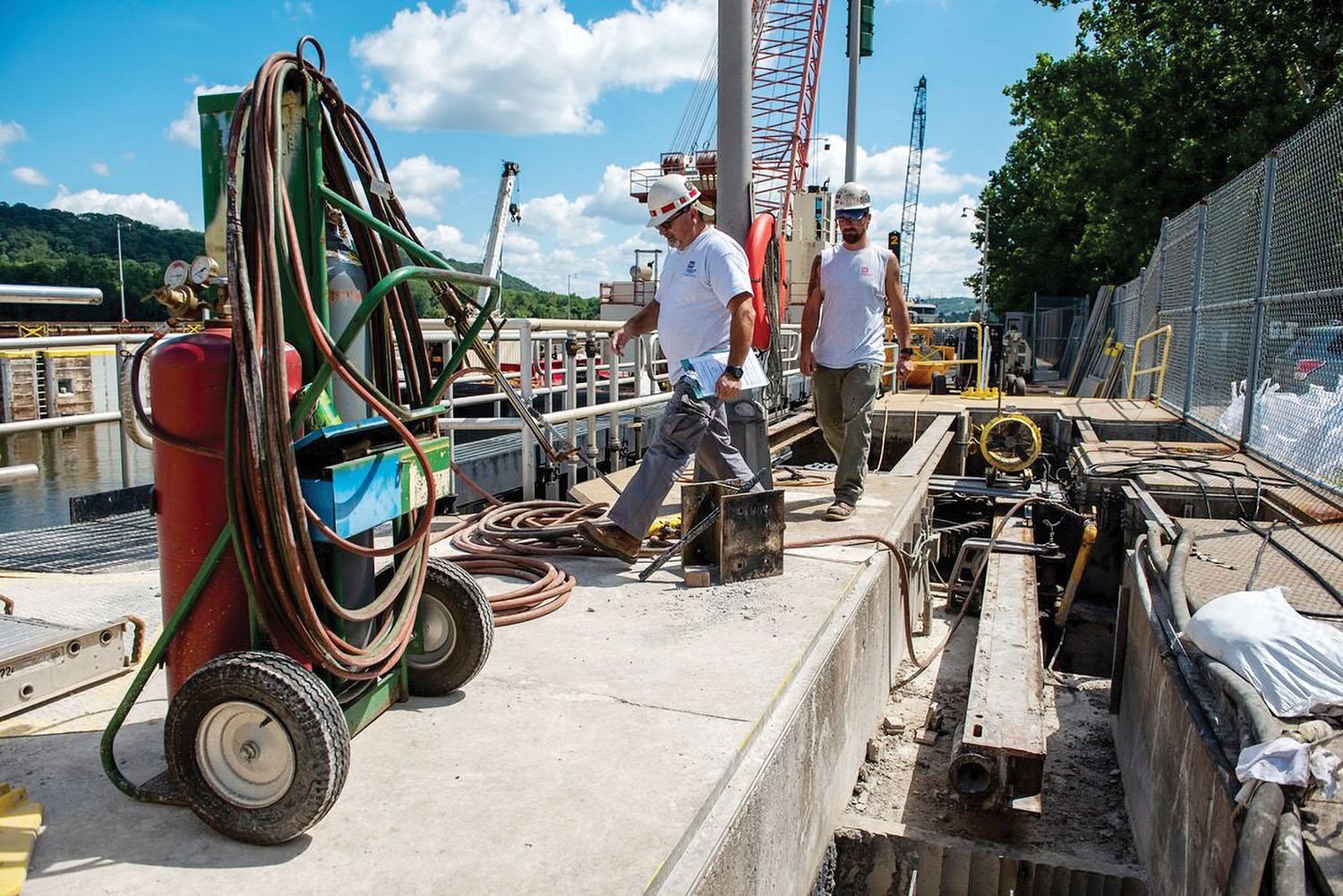 With more than 97 percent of the Pittsburgh Engineer District’s funding in the Infrastructure Investment and Jobs Act (IIJA) allocated to the full funding of the Montgomery Locks construction work, developers say it will prevent delays and cost overruns while ensuring continued navigability for decades to come.

The Corps of Engineers released its work plan in January. Among other priorities, it outlined which infrastructure projects along the inland waterways will be funded by the money Congress approved in the bipartisan bill, signed into law in November.

The Pittsburgh Engineer District received $881.9 million in supplemental funding, nearly one-third of the amount in the bill targeted for inland waterways around the nation. Although the funding supports 11 different district projects, including work at several multipurpose reservoirs, the overwhelming bulk of it—$857.7 million—goes to fully funding the design and construction of the new lock at Montgomery Locks and Dam in Monaca, Beaver County, Pa. In fact, the Montgomery Locks and Dam was the district’s only navigation project specified by the IIJA work plan to receive construction funding.

The Montgomery project is part of the overall Upper Ohio Navigation Project that also involves modernizing and upgrading capacity to lock chambers at the Emsworth and Dashields facilities with the goal of increasing infrastructure reliability. The three locks are the oldest and smallest lock chambers on the Ohio River, and each is more than 85 years old.

Construction at Montgomery Locks and Dam (Ohio River Mile 31.7) began in 1932 and was completed in 1936, according to Andrew Byrne, a public affairs specialist for the Pittsburgh Engineer District. The project calls for the existing 56- by 360-foot auxiliary chamber to be replaced with a new main chamber that will measure 600 by 110 feet. Work is being done at the existing main chamber currently to help keep it in operation throughout the construction of the new chamber and thus minimize navigational impacts then, said Steve Fritz, Corps program manager for mega projects.

The award for the construction contract for the new lock chamber is estimated to be announced in 2024, with construction beginning the same year, said Chris Dening, project manager for the Upper Ohio Navigation Project. The new funding won’t accelerate the timeline for the commencement of construction, but it has the potential to speed the process along.

“The idea of having this fully funded work at Montgomery eliminates the risk of having no funding at all [in future years],” Fritz said.

An example of delays due to lack of funding elsewhere in the Pittsburgh district has been seen with the Lower Monongahela Navigation Project. The Lower Mon Project replaced the nearly 100-year-old fixed-crest dam at Braddock Locks and Dam with a gated dam. It will remove Locks and Dam 3 in Elizabeth and construct two new larger locks at Locks and Dam 4 in Charleroi.

Originally scheduled for completion in 2005, the Lower Mon project is now on the books until 2025 because of years of being authorized without receiving efficient funding. “So we’ve added a significant amount of time and cost to that project because of the inability to secure the right amount of funding,” Fritz said.

The IIJA funding for the Montgomery project avoids those delays, Fritz said.

“It minimizes future impacts and delays to construction that otherwise might be caused if there was a lapse in funding,” Dening said. “This allows us to move forward in full confidence.”

It adds efficiencies to the workflow as well.

“We can do the work out there now with one contract as opposed to having the 15 or 16 contracts that we had for the Charleroi project,” Fritz said. “The Montgomery contractor will not be relying on some other contractor to get work done and to do it the correct way before they could get in there.”

Col. Adam Czekanski, commander of the Pittsburgh District, has also talked about the importance of the funding.

“The inland navigation system is a crucial contributor to national and regional economic success,” he said. “Receiving this supplemental funding will ensure this crucial inland navigation facility continues to provide the most cost-effective and environmentally friendly means of moving bulk commodities for decades to come. We appreciate the continued strong congressional support for this project.”

Next steps on the project will include finishing the design for the new Montgomery chamber in 2022 and 2023, Dening said. It will be constructed riverward of the remaining chamber. The project will then move into the acquisition phase and be let for bid.

Once construction begins, the project is estimated to take eight to 10 years to complete, Dening said.

“We’ve announced a major investment of $858 million to modernize the Montgomery Lock northwest of Pittsburgh – so the water levels stay high enough for barges to pass through up on the upper Ohio River …,” he said. “We move about a half a trillion dollars’ worth of goods through those locks like these across the country every single year…. When they’re not working, it creates chokepoints.  Barges break up, goods don’t get to where they need to go.  Bob Casey’s been on my back about this for so long.  As we get this Montgomery Lock project done, I think we should call it the Casey Lock.”

Biden referred to Sen. Robert Casey of Pennsylvania, who has long advocated for the funding.

“Pittsburgh’s three rivers [the Ohio, the Monongahela and the Allegheny] … those three rivers, those waterways drive this region’s economy while connecting our nation’s commerce,” Casey said.

Casey also spoke about how failure to invest in the infrastructure would place the waterways and their 76,500 jobs at risk.

“The good news is just a couple of days ago the Army Corps of Engineers, this administration, the Biden-Harris administration, announced $857.7 million to complete the construction of the Montgomery Lock and Dam. We are grateful for that,” he said.

The Pittsburgh region will benefit for many years from the infrastructure investments being made in the region via the IIJA, supporters said.

“This funding announcement is a big win for southwestern Pennsylvania,” said Mary Ann Bucci, executive director of the Port of Pittsburgh Commission. “The Port of Pittsburgh is a driver of jobs and economic prosperity in the region, and by completing the much-needed construction on the Montgomery Locks and Dam, we will be able to safely bring goods in and out of Pittsburgh.”

She noted that Montgomery Locks average about 300 commercial lockages every month, plus another 150 lockages of pleasure craft during the summer season.

Bucci said that Casey and U.S. Rep. Conor Lamb brought U.S. Transportation Secretary Pete Buttigieg to Pittsburgh last spring, and that it provided an opportunity show Buttigieg the importance of the inland waterway system and the need for investment in aging lock and dam infrastructure.

“Not only are our waterways critical to the movement of freight in the region, but also the quality of life throughout southwestern Pennsylvania,” Bucci said.

Lamb was among the people who celebrated the announcement of the funding.

“River traffic is something few people think about unless it is shut down,” he said. “The Montgomery Lock and Dam is nearly 100 years old, and if it collapses, we could lose thousands of jobs and add thousands of trucks to our roads, meaning more pollution and traffic. This funding is essential and the result of years of advocacy and old-fashioned, hard legislative work.”

Matt Smith, president of the Greater Pittsburgh Chamber of Commerce, an affiliate of the Allegheny Conference on Community Development, focused on the announcement as a driver of economic development and said the agency will continue to advocate for funding for other aspects of the Upper Ohio project.

“This is fantastic news for the region and our inland waterways,” he said. “Southwestern Pennsylvania’s rivers provide the region’s businesses a competitive advantage and access to a global marketplace. We are grateful for our partnership with the Port of Pittsburgh Commission and key infrastructure stakeholders across the region in advocating for these necessary improvements critical to our region’s success. We look forward to continuing our efforts and realizing the reconstruction of the Upper Ohio Navigation System Project at the Montgomery, Emsworth and Dashields locks and dams.”

Caption for photo: Crewmembers walk across a beam over a hydraulic cylinder pit at the Montgomery Locks and Dam on the Ohio River in Beaver County, Pa. Design and construction of a new lock at Montgomery is fully funded as part of the Corps work plan announced in January. (Photo by Michel Sauret/Pittsburgh Engineer District)