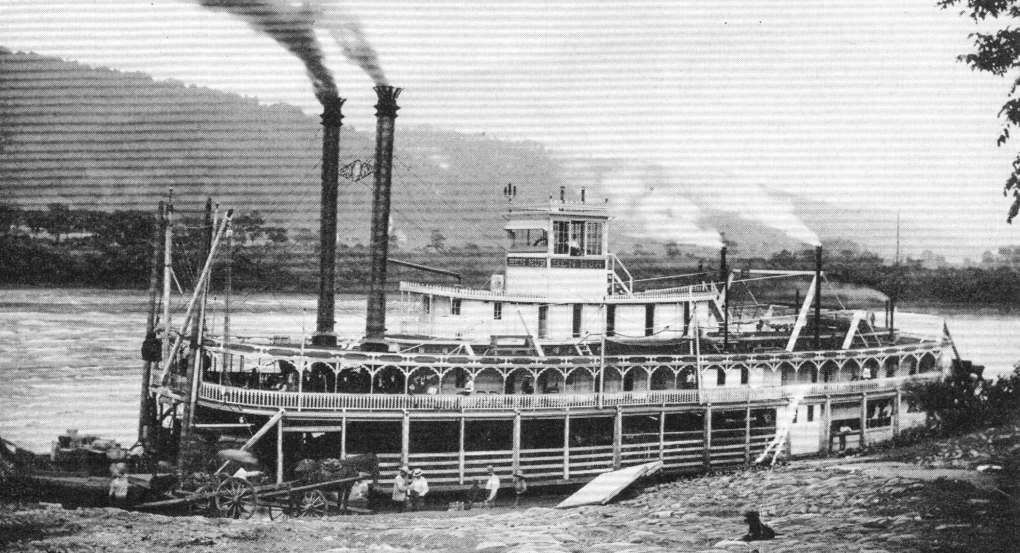 The Ben Hur Was Accident-Prone

Editor’s note: Keith Norrington is retiring as Old Boat columnist for The Waterways Journal after a decade of weekly columns. His final column will appear April 4; until then, we are rerunning several of his favorite columns.

The sternwheel packet Ben Hur was built by the Knox Boat Yard at Harmar (Marietta), Ohio, in 1887, the same year as the founding of The Waterways Journal. Constructed on a wooden hull measuring 165 feet in length by 30.5 feet in width, the boat initially came out in the Pittsburgh–Parkersburg trade. Three boilers supplied steam to engines (16-inch cylinders with 5.5-foot stroke) that were recycled from the towboat Ed Hobbs.

The three-chime whistle formerly served on the packet George Strecker (1880-1887) and was made by a farmer who lived near Waverly, W.Va. The whistle later was used on the packets Bessie Smith, Liberty and finally on the towboat Mildred; it resides today in the collection of the Missouri Historical Society, St. Louis.

During the boat’s first season, it transported the John Robinson Circus on a river tour. Capt. Fred Kimpel was master with Capt. Monroe “Doggy” Cross and Capt. Bert Cramer, pilots. By the summer of 1904, the steamboat was owned by the Mississippi River Amusement Company of St. Paul, Minn., where it served as an excursion boat.

The vessel again changed owners and location when Capt. Tom Morrisey purchased it to run in trades out of Vicksburg. In 1912, the Hur was running twice weekly in the New Orleans-Bayou Teche trade.

While owned by Capt. George Prince, the vessel sank in March 1916, and it was a total loss.

During its tenure, the Ben Hur suffered a number of accidents and incidents. While near Vienna Island on January 9, 1890, the boat broke its paddlewheel shaft, which, in turn, destroyed both cylinder heads of the port engine. Two crew members were scalded, with one dying as a result of his injuries.

The boat was involved in two collisions. The first, in 1892, was with the Volunteer, and the other, in 1898, was with the towboat Raymond Horner, causing damages (estimated at $125) to the deck of the Ben Hur.

While the boat was tied up at East Liverpool, Ohio, Henry Clark, a member of the crew, was killed when struck in the head with a stick of wood by one of the boat’s deckhands. In 1903, Robert Steel, a deckhand, was accidentally killed while carrying a load of pipe. During the riverboat’s years of service on the upper Ohio, four deckhands fell overboard and drowned.

The Ben Hur was considered a good-looking steamboat, but it was noted to be a heavy coal burner, owing to the fact that it was of heavier draft than many other boats of comparable size and class. While the riverboat was never considered a big money-maker, Capt. Walter Booth once told The Waterways Journal that the boat cleared $14,000 in seven months during the middle 1890s.

The Ben Hur was laid up near Wheeling in 1908 and replaced in the trade by the H.K. Bedford. Capt. Henry Kraft, the last master of the Ben Hur while in Ohio River service, transferred over to the Bedford and remained in that position until the boat was destroyed by ice in 1912.