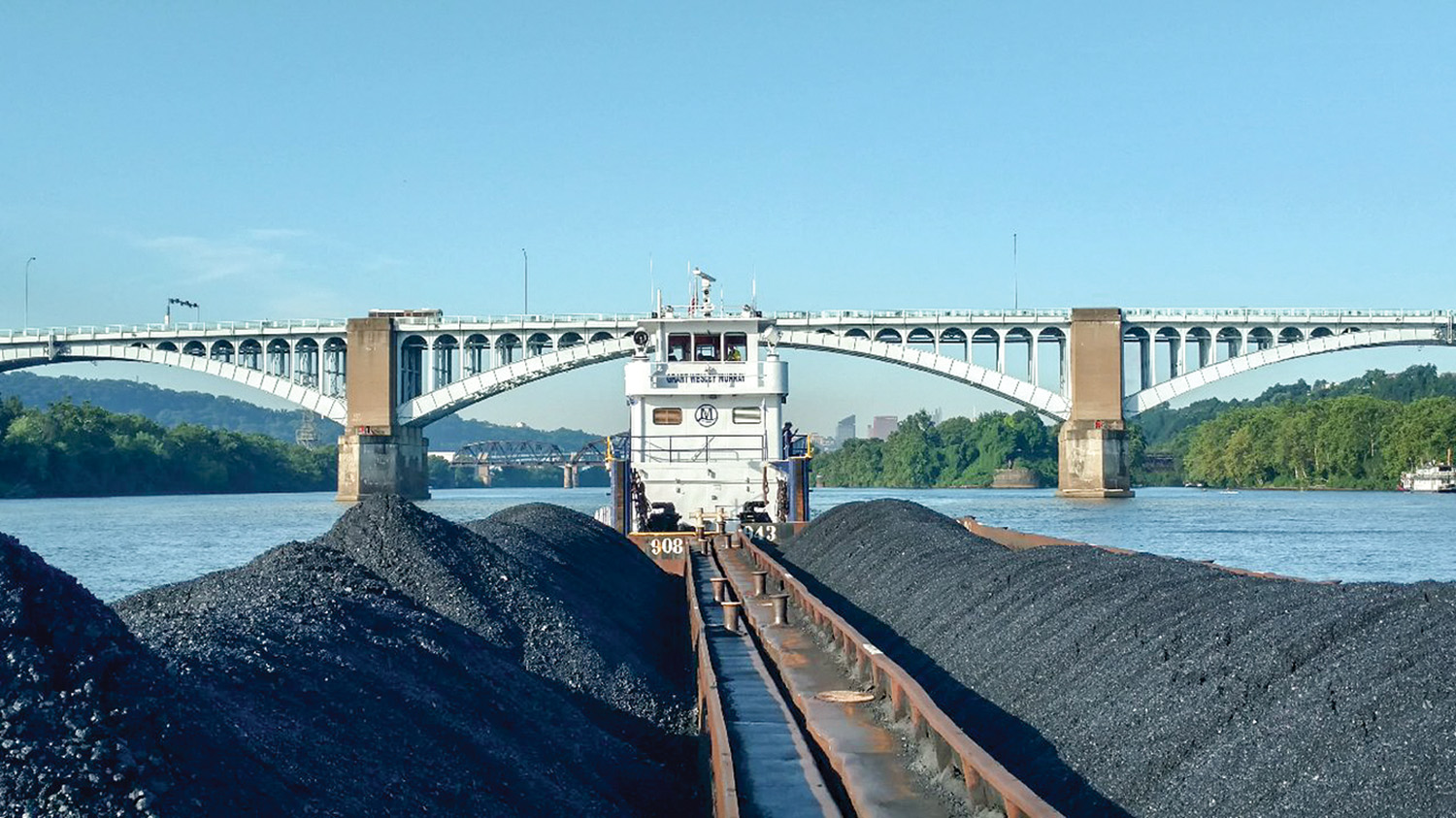 The Port of Pittsburgh: A Vast River Traffic Region

The Port of Pittsburgh, spanning 12 counties in southwestern Pennsylvania, encompasses nearly 200 miles of commercially navigable waterways—including three major rivers. The Allegheny, Monongahela and Ohio rivers are made navigable by 17 lock and dam systems, which are used by hundreds of river terminals and barge transportation companies.

It’s this vast system of locks and dams, terminals and waterways that add to the uniqueness of the port, which is governed by a commission of board members. Following a brutal winter of ice and excessive rains and the fact that the region’s locks and dams are in dire need of repairs—some of which are underway now—the Port of Pittsburgh has some challenges as it recovers and uses its resources to push forward during a particularly difficult time in the industry.

Despite the harsh winter, which led to several barge breakaways in January and a stall in river traffic, some developments in the region have the industry buzzing at the thought of new business prospects, as others in the industry fight for additional infrastructure funding. With the passing of the omnibus spending bill March 21, some of that funding may be going toward Pittsburgh projects this year.

A Unique Port
Unlike most port districts, however, the Port of Pittsburgh isn’t a multi-modal complex confined to one geographic area, but rather to a broad region governed by the Port of Pittsburgh Commission. Formed in 1992, the commission serves to promote the commercial use and development of the inland waterways and an intermodal transportation system, and to integrate that system into the economic, recreational, environmental and intermodal future of the residents and industries in the region.

Bucci said the port and its region are unique for at least three reasons. “Pittsburgh is exceptional in that it is an inland river port without a publicly owned or operated port facility,” she said. “All of the terminal facilities are privately owned and operated.”

Furthermore, Bucci said the port is a terminus on the inland waterway network, with not one or two, but three separate rivers as part of its port district. “Much of the cargo that moves through the port either originates from or is destined to southwestern Pennsylvania,” she said. “There is very little ‘through traffic.’”

Lastly, Bucci said it is the state itself that is unique in that Pennsylvania is the only state to have three different types of ports—a deep-water port in Philadelphia, a Great Lakes port at Lake Erie, and the Port of Pittsburgh to serve inland river transportation needs.

New Business
Peter Stephaich, chairman and CEO of Campbell Transportation Company, a Houston, Pa., barge and towing operation near Pittsburgh, said that while business isn’t exactly booming at the moment, the company has been busy with a new contract it was awarded by the Tennessee Valley Authority (TVA) to tow coal to its Cumberland Fossil Plant located on the shores of Barkley Reservoir in Cumberland City, Tenn.

The multi-year contract, which began April 1, came after the closure of TVA’s New Johnsonville and Allen plants in Tennessee, for which Campbell transported coal. “This Cumberland plant is a big deal for us,” said Stephaich, who added that Shell’s new $6 billion ethane cracker plant 30 miles northwest of Pittsburgh is sure to bring new business to the region.

“A lot of the parts and equipment for the plant will come up here by barge,” said Stephaich. “We’ll be helping with fleeting and local deliveries and stuff like that.”

Shell said in a press statement that commercial operation of the plant is due to begin “early in the next decade” and will employ about 600 people permanently. The operation is due to make 1.6 million metric tons a year of ethylene, which is used in products ranging from food packaging to automotive parts.

Bucci said the commission has been contacted by people looking for property on the riverfront near the cracker plant site. “This new plant is really exciting for our region, and we’re hoping it brings lots of new business and river interests to the area,” she said.

While the coal business has been down, Stephaich said the metallurgic, or met, coal market has been relatively strong. Backing up Stephaich’s claim that met coal is doing well is a 2017 report titled, “Metallurgical Coal—From Dusk Till Dawn.” The report states that metallurgical coal prices will come down but are expected to stay most likely above marginal costs into 2021.

A Challenging Time
According to the Corps’ Navigation Data Center’s Waterborne Commerce Statistics Center, the port ranked No. 31 in the nation in 2016, with more than 22 million tons of river cargo.

While numbers have most likely declined since then due to the current state of the industry, Bucci said commodities related to the energy sector are on the rise. “It’s an exciting time for the region from that perspective,” she said, while adding that tonnage has been a challenge due to annual commodity traffic experiencing a significant decrease each year. “This is primarily due to declining demand for coal.”

Bucci said the commission has been working to encourage businesses to make use of waterway transportation as a way of ensuring the vitality of the region since barge transportation is economically advantageous and has the lowest environmental impact.

Besides a decline in coal demand, Bucci said the area has, for many years, had an ongoing issue with its infrastructure on the rivers. “The condition of the infrastructure is rapidly declining, which is placing ever-increasing strains on the industry to work its movement schedules around lock outages,” she said. “While scheduled outages can be planned for despite being inconvenient and costly, unscheduled outages are becoming more frequent and are very costly due to the interruptions in deliveries they cause.”

As this story went to press, Dashields was being dewatered for the first time in years, according to Carol Vernon, public affairs specialist with the Pittsburgh District. “Both chambers at Dashields are being dewatered now so that we can do a fuller inspection of the lock chamber to see where we need to concentrate our efforts to ensure the reliability of the structure,” she said. “The lock is 89 years old, with a lifespan of only 50 years. Most of our locks have well exceeded their usable life, but with the Corps’ maintenance, they’ve been lasting longer than expected.”

Vernon added that progress continues at Emsworth and Dashields locks and dams, with a projected completion date of June 8. The district said it will continue to provide updates regarding how any delays, including potential high-water events, will affect the timeline.

Bruce McConkey, general manager of operations and maintenance for Murray American Transportation near Pittsburgh, said that while operations remain slow outside of usual rebuild projects, infrastructure improvements could make a big impact on business. “Infrastructure is such a huge deal,” he said. “It’s been a tough winter and the lock outages are just another hurdle to climb.”

David Podurgiel, navigation chair and secretary for the Waterways Association of Pittsburgh, agreed and said the region’s aging infrastructure has been its biggest challenge. “We are experiencing significant delays to the industry due to these projects,” he said, and added that tows of 15 to 20 barges can normally pass through the locks in two hours. Now, Podurgiel said, the industry is restricted to bringing five barges at a time through the auxiliary chambers of Emsworth and Dashields locks, with each barge taking up to one hour to lock through. “That’s almost 10 hours to lock through 10 barges, when normally we can get 15 through in two to three hours,” he said.

Podurgiel said that some vessels are in queue at the locks waiting up to 48 hours or more to pass through. Once work wraps up at Emsworth and Dashields, another lock outage will take place in August on the Ohio River at Montgomery Lock and Dam at Mile 32, which is expected to cause significant delays and lost revenue to local towing companies and industries that rely on river transportation.

On the Allegheny River, which also feeds into Pittsburgh, locks are in poor shape, with only Lock 2 scheduled to receive repairs late next year, according to Podurgiel. “Power plants, steel mills, sand and gravel, concrete and other companies along with fuel deliveries into the Pittsburgh area are greatly impacted by aging infrastructure and that in turn keeps new industries that rely on the waterways from wanting to locate in our district,” he said.

Another project, the Lower Monongahela River Project, which was in the planning phase in the early 1990s, with a proposed completion date of 2003, will now be completed by 2023, added Podurgiel. “This project originally proposed enlarging both chambers at Lock 4 in Charleroi (Pa.), the removal of Lock 3 in Elizabeth (Pa.), and the addition of a gated dam to Lock 2 at Braddock (Pa.),” he said. “As of today, only the dam at Lock 2 has been completed. Lock 4 will only have one 720- by 84-foot chamber instead of the proposed two chambers, and Lock 3 is still needed until Lock 4 is completed.”

An Appeal For Funding
Both Bucci and Podurgiel said that the industry must continue to appeal to local, state and national government officials for more funding to the rivers’ crumbling infrastructure.

“We need to get the funds appropriated for the inland waterways, and we’re working on that all the time,” said Podurgiel. “Members of the Port of Pittsburgh and the Waterways Association of Pittsburgh travel to Washington, D.C., and to local offices to express our concerns and needs to better improve our waterways, which are vital to the American economy.” Podurgiel added that his committee works closely with the Pittsburgh Engineer District to lessen the impact on the industry during lock repairs and maintenance.

Stephaich, a member of the Port of Pittsburgh Commission, said that Congress’ $1.3 trillion spending bill could be good for the region’s waterways. “We’re looking at a $399 million construction budget here, which means it would be fully funded under the omnibus bill,” he said, although he admits that the funding would be for Fiscal Year 2018 and projects can take decades to complete.

The omnibus spending bill nearly doubled funding for construction projects led by the Corps, from $1 to $2 billion. While it remains unclear how the money will be allocated by the Corps, the Pittsburgh District said it is optimistic that some of its pressing infrastructure matters will see some funding.