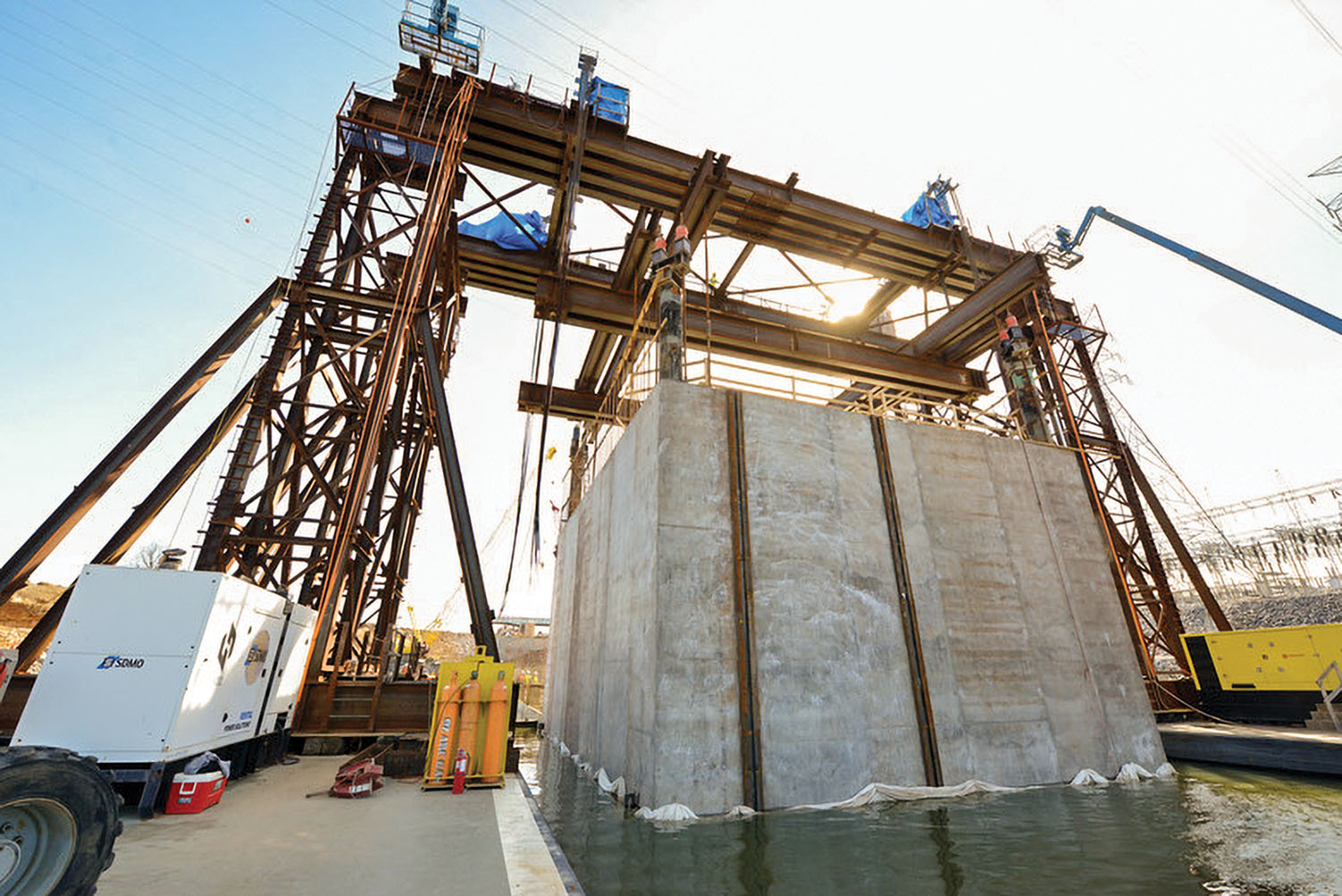 A contractor for the U.S. Army Corps of Engineers has placed the 10th and final concrete shell for the Kentucky Lock addition project, putting construction back on track.

The shell for the downstream cofferdam, which also forms the new lock wall, took place February 2. It had originally been scheduled for December. Johnson Brothers, contractor for the project, set the final shell into position on the riverbed after high waters on the Tennessee River receded to a suitable elevation following weeks of delays.

“This last shell is on the critical path for the project, so every day we had to delay placing the shell, we delayed the completion of the project by one day,” said Don Getty, Nashville District’s project manager for the project. “We’ve been waiting since December 18 for the water level to drop to where we could place the shell.”

Divers planned to spend the next week sealing the base of the concrete shell with sandbags. Construction workers will then place tremie concrete in the bottom of the shell to cure and form a plug.

Barney Schulte, the project’s lead engineer, said the gantry crane was designed and constructed specifically for the downstream cofferdam contract and proved its worth with the final lift of the approximately 46-foot wide by 53-foot long by 31-foot high concrete shell.

“Many factors went into its design: most importantly, its lifting capacity had to be large enough to lift the largest shell, which weighs approximately 1.7 million pounds,” Schulte said. “The footprint of the crane had to fit in a tight construction space while also fitting under the highway and railroad bridges immediately downstream.”

Jody Robinson, project engineer and contracting officer’s representative for the project, said the final lift went smoothly due to the team effort of onsite construction managers and the contractor.

“Now we will send divers down to hook up cables to pull the shells together, then drop the spuds,” Robinson said. “The spuds are what actually hold the weight of the shell.”

With the placement of the last concrete shell, the contractor can now construct the temporary portion of the downstream cofferdam, the final step that will make it possible to excavate and then construct the new lock in dry conditions. The contractor will install three 69-foot diameter sheet-pile cells to complete the cofferdam, which is now 73 percent finished.

The contractor recently placed most of the 24 feet of concrete on top of five of the previously placed nine shells to raise the level of the future lock wall from 33 to 57 feet. Water overtopped the four other shells around December 20, so the concrete has not yet been placed on those shells.

Other Work On Project

Getty said work is ongoing elsewhere on the site. The $55 million excavation contract, which began in September 2018, is stabilizing the existing lock land wall and removing soil and rock from behind it. The contractor also demolished abandoned bridges and the lock maintenance building. When completed, the downstream cofferdam will make it possible to complete the excavation and then construct the downstream portion of the lock chamber.

The total cost of the Kentucky Lock Addition Project is $1.22 billion, with about $490 million expended to date. The project is about 40 percent complete.

The contract period is 56 months and includes limited rock excavation, placement of about 400,000 cubic yards of concrete in the construction of 51 lock monoliths, fabrication and installation of downstream miter gates, construction of two bridges across the navigation locks, grouting the lock wall foundation, backfill of 1 million cubic yards of soil, and fabrication and installation of 17 mooring bitts.

Caption for top photo: The Nashville Engineer District and its contractor partner Johnson Brothers put a 1.7-million-pound concrete shell into position February 2 on the riverbed on the downstream end of Kentucky Lock. The last of 10 shells, it will be part of a cofferdam and eventually a permanent part of the new lock wall for the Kentucky Lock Addition Project. (Corps of Engineers photos by Mark Rankin)