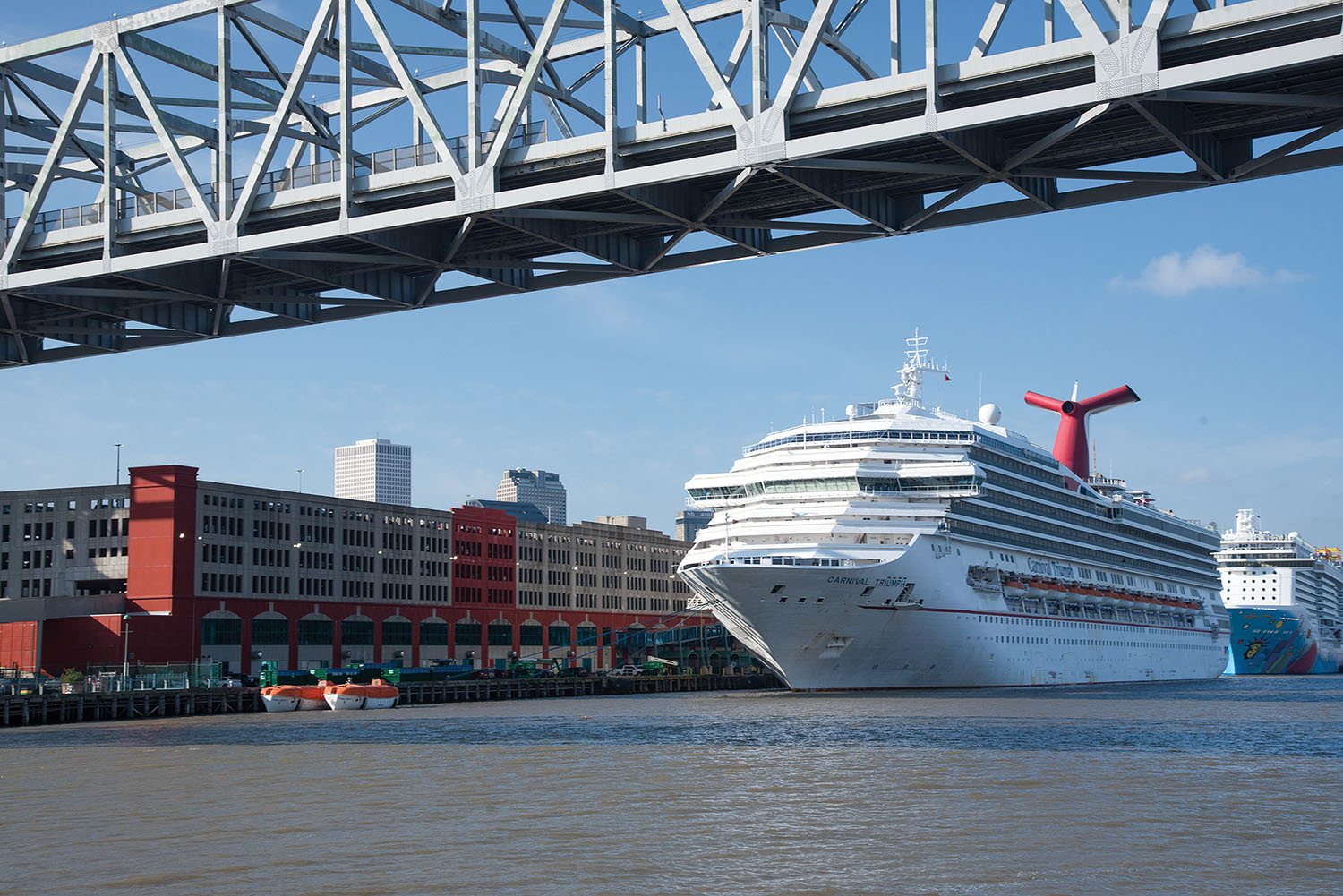 While much of the nation’s economy is back underway, albeit with restrictions due to COVID-19 still in place, one segment still stuck in port is the blue-water cruise industry.

Earlier in April, the Centers for Disease Control & Prevention (CDC) updated its “Framework for Conditional Sailing Order” and released recommendations for travelers returning from cruise ships and river cruise voyages worldwide. And while the CDC is still prohibiting embarkations of large cruise ships at U.S. ports, the agency, it seems, has come to grips that U.S. citizens may nonetheless travel abroad to board a cruise ship.

“CDC recommends that all people avoid travel on cruise ships, including river cruises, worldwide,” the agency states in an article dated April 12, 2021. “That’s because the chance of getting COVID-19 on cruise ships is high since the virus appears to spread more easily between people in close quarters aboard ships.”

However, the article then goes on to list steps passengers should take when returning from cruises. For vaccinated passengers, CDC recommends the following: get tested for COVID-19 three to five days after a cruise, isolate if the test is positive and, regardless of the test result, self-monitor for COVID-19 for 14 days after travel. Vaccinated passengers need not self-quarantine after a cruise, the CDC said.

Unvaccinated cruisers should also “avoid being around people who are at increased risk for severe illness for 14 days, whether you get tested or not,” the agency said.

Those who have recently recovered from COVID-19 will have the easiest time, at least according to the CDC recommendation. They need not be tested for COVID-19 before or after their cruise, unless they become symptomatic. Nor do they need to self-quarantine after the cruise.

The regulatory water is murkier for cruise operators. When CDC’s No Sail Order expired on October 31, 2020, the agency moved to a “Conditional Sale Order,” or a “Framework for Conditional Sailing,” which describes a “phased return to cruise ship passenger voyages in a manner that mitigates COVID-19 risk among passengers, crew members and U.S. communities.”

CDC stated the Framework for Conditional Sailing order will remain in place until the federal government’s public health emergency declaration expires, the CDC rescinds or modifies the order, or November 1, 2021.

Conspicuously absent from that original order, though, is a concrete timeline for when sailings could actually begin, and that has blue-water cruise lines scrambling, and in some cases moving vessel homeports out of the United States.

Carnival Cruise Line has canceled all cruises departing from U.S. ports until after June 30 and is delaying final payment for July cruises until, for now, May 31, with the ability to cancel without penalty. In announcing the move, Carnival Cruise Line President Christine Duffy singled out the Biden-Harris administration and the CDC.

“We know that this is very disappointing to our guests who continue to be eager to sail, and we remain committed to working with the administration and the CDC to find a workable solution that best serves the interest of public health,” Duffy said. “We are asking that the cruise industry be treated on par with the approach being taken with other travel and tourism sectors, as well as U.S. society at large.

“While we have not made plans to move Carnival Cruise Line ships outside of our U.S. homeports, we may have no choice but to do so in order to resume our operations, which have been on ‘pause’ for over a year,” she added. “We appreciate the continued patience and support from our loyal guests, travel advisors and business partners as we work on a return-to-service solution.”

In the company’s April 7 first quarter report, Carnival said it expects to resume limited-guest cruise operations by the summer in six of the company’s nine brands, with all of those mentioned operating in overseas ports of call. Interestingly, Carnival Corporation’s Holland America Line and Princess Cruises plan to offer land-based only vacation itineraries in Alaska this summer.

Norwegian Cruise Line and Royal Caribbean have similarly pushed back their planned resumption of cruising, with Norwegian announcing cruise itineraries for Europe and the Caribbean to start in late July and Royal Caribbean suspending sailings until the end of June. For six of Royal Caribbean’s vessels, the company has changed home ports in order to allow sailing to begin sooner. No U.S. home ports were on that list.

Cruise lines have discussed the possibility of requiring crew members and passengers to be vaccinated for COVID-19 before embarkation in the United States. That idea, though, would run afoul of the governor of one of cruising’s busiest states, Florida, where Gov. Ron DeSantis has recently signed an executive order banning so-called vaccine passports. Both Florida and Alaska have filed a lawsuit over the CDC’s cruise restrictions.

Meanwhile, ports of call that typically play host to oceangoing cruise ships continue to soldier on without that business line. At the Port of New Orleans alone, for instance, since cruising was suspended March 16, 2020, the port has missed close to 340 ship calls and an estimated 1.5 million cruise passenger movements. By the end of this fiscal year, total revenue lost at the Port of New Orleans will be close to $21 million.

Regionally, the impact is much larger. Between ship crews and passengers and the cruise lines themselves, the cruise industry generates about $250 million in regional economy in southeast Louisiana. According to the port, 98 percent of cruise ship calls are homeport calls, meaning those ships are taking on provisions, fueling and undergoing maintenance in Louisiana. In addition, 90 percent of cruise passengers coming to New Orleans are from out of the state, and 73 percent spend an extra day or two in New Orleans before or after their cruise. That adds up to more than 300,000 hotel nights per year.

And that’s just in New Orleans, the sixth busiest cruise port in the United States before the pandemic.

In a recent op-ed in the Times-Picayune/New Orleans Advocate newspaper, Port of New Orleans President and CEO Brandy Christian, like Duffy and others in the industry, pointed to the lack of a timeline from CDC for the cruise industry.

She also noted that more than 400,000 passengers have sailed from ports in Europe and Asia since last summer. That’s evidence cruising can resume safely, she said.

“That is a clear signal that the health procedures and protocols the cruise industry has adopted elsewhere are effective and will be effective here in the U.S. as well,” Christian wrote. “The resources are available, and the cruise industry is willing to work with the CDC to ensure cruise vessels can set sail again safely and with the highest priority on protecting the well-being of crews, passengers and port workers.”

In response to all this pressure, the CDC reportedly reiterated its support of cruising in an April 28 letter to the industry in which the agency set mid-July as a goal for the resumption of cruising. In the letter, CDC officials reportedly committed to more speedy reviews of cruise simulations and a streamlined process for cruise ships that can show high rates of vaccination for both passengers and crew members.

“Last night, the CDC notified us of some clarifications and amplifications of their Conditional Sail Order which addressed uncertainties and concerns we had raised,” Fain said. “They have dealt with many of these items in a constructive manner that takes into account recent advances in vaccines and medical science. Although this is only part of a very complex process, it encourages us that we now see a pathway to a healthy and achievable return to service, hopefully in time for an Alaskan season.”

Fortunately, it’s not all bad news for the U.S. cruise industry because two cruise lines are already sailing again: American Cruise Lines (ACL) and the American Queen Steamboat Company (AQSC). That’s thanks to the fact that the CDC defines a cruise ship in its Framework For Conditional Sailing as a commercial, non-cargo vessel “with the capacity to carry 250 or more individuals,” with a multi-day, overnight itinerary.

As such, ACL and AQSC have both modified occupancies on their riverboats to fall below 250. So far, ACL’s American Jazz, America and Queen of the Mississippi are already operating on the Mississippi River, with a fourth vessel planned for later in the year. Earlier in March, ACL restarted cruises on the South Carolina, Georgia and Florida coasts, with all 13 of the company’s ships expected to be underway by summer.

Likewise, AQSC is already operating the American Countess and American Duchess on the Mississippi River, with the American Queen planned to get underway in May. ACL is encouraging guests to get vaccinated, while AQSC will begin requiring COVID-19 vaccination for guests and crew on July 1. Whether vaccinated or not, guests aboard both companies’ riverboats are required to wear masks and test negative for COVID prior to boarding.

Even at reduced occupancy, the return to sailing—and the port calls and excursions it brings—is a welcome sign for communities along the inland waterways.

Mary Hammond, executive director of the Paducah Convention & Visitors Bureau, said she sees cruising as a positive sign of her region’s economic recovery from the pandemic.

“We appreciate the cruise lines keeping health and safety at heart, while continuing to create opportunities for passengers to have memorable experiences in Paducah,” Hammond said. “The shore excursions to local museums may be operating a bit differently than in the past, but they are providing much-needed support for nonprofit cultural attractions that sustained significant drops in visitation last year due to the pandemic.”

And with Viking River Cruises already planning to begin sailing on the Mississippi River next year, and recently opening reservations for the 2024 cruising season, river cruising in the United States will continue to be a bright spot, with or without the pandemic.

Caption for photo: The Carnival Triumph at the Erato Street Cruise Terminal in New Orleans. (Photo by Tracie Morris Schaefer, courtesy of Port of New Orleans)