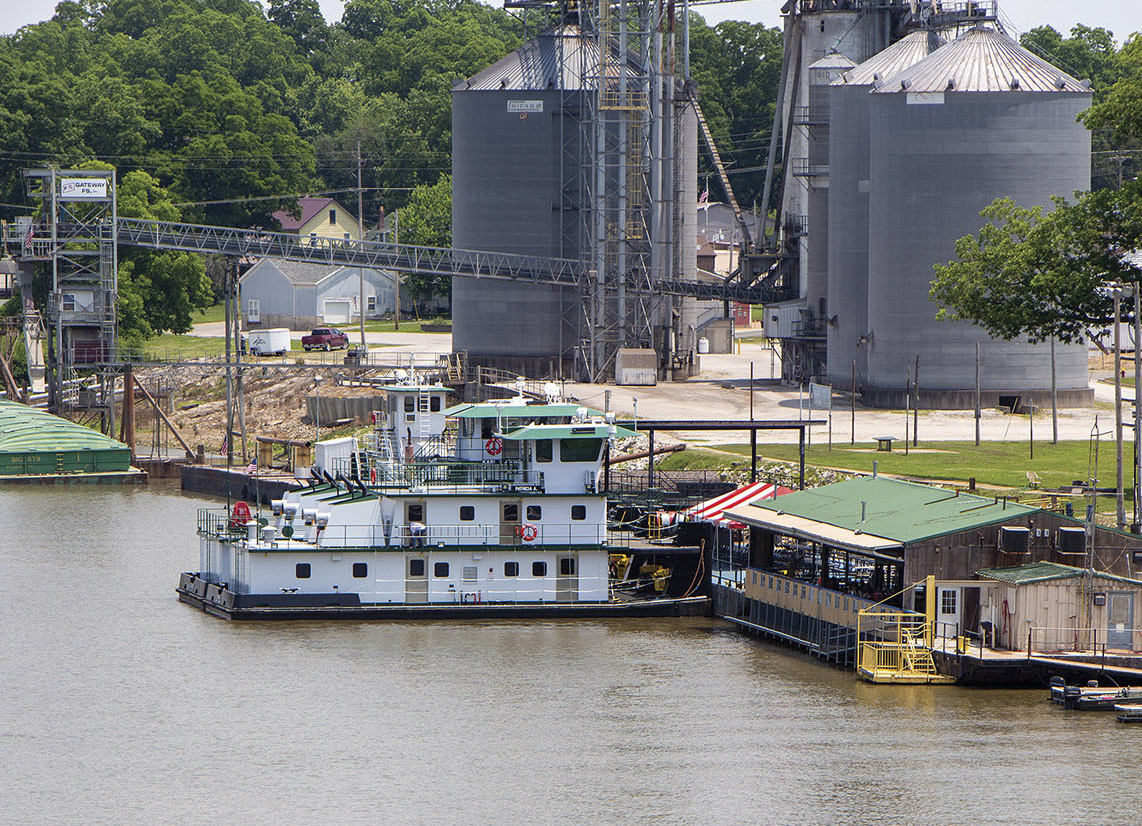 Humid temperatures in the 90s didn’t stop a crowd of about 100 people from attending a long-delayed double towboat christening June 12 in Evansville, a small town on the Kaskaskia River in southern Illinois.The 325-mile-long Kaskaskia River, with its one lock where it joins the Mississippi River, has become an ever-more-important artery for cargoes including grain, fertilizer, steel and limestone, having been energetically promoted and developed by the Lower Kaskaskia Stakeholders Inc.The attendees were friends, co-workers and family members of the two boats’ namesakes, Karl E. Johnson and Patricia Arbeiter, whom they were there to honor at the Waterstreet Bar and Grill on the Kaskaskia riverfront.

The two boats were both built for Southern Illinois Transfer Inc. by sister company Barbour JB Shipyard, where the boat building crew of eight worked in a 30,000-square-foot, temperature- and humidity-controlled warehouse at KRPD 2 (Kaskaskia River Public Dock 2). They are the third and fourth boats the company has built.  The first, delivered in 2016, was the David J. Bangert, a 55-foot, 1,320 hp. vessel. The second was the Kaskaskia Warrior.

Kurt Johnson, president of, and a partner in, Southern Illinois Transfer Inc. and a co-owner at Midwest Trans-Load LLC, said the company originally explored outsourcing the construction, but was hit by “sticker shock.” He is also a big proponent of vertically integrating his business. “What we offer is a service, and we want to control as much of it as we can,” he said.

Both boats were designed by Sterling Marine. Both measure 68 by 28 by 9.6 feet and have revived the use of a double-chined hull that was developed by Barbour Metal Boat Works years ago. The vessels, both lunch-bucket boats, are powered by twin Cummins QSK19 engines coupled to Twin Disc’s Veth model VZ 700 Z-drives and Veth electric-over-hydraulic steering controls. Auxiliary power is from Kubota 40 kw. generator sets. There is tankage for 14,468 gallons of fuel, 1,900 gallons of fresh water and 350 gallons each of lube, gear and hydraulic oil. A big difference is that the Patricia A has a retractable pilot house.

Kurt Johnson spoke first at the christening ceremony. Karl was his older brother who stuck with farming while Kurt became a lawyer, then branched out from the grain business into fleet management and towboating. Kurt had fond memories growing up with his older brother, a hard worker who enjoyed farming his family’s spread. Kurt remembered that they always competed over who would get to run the combine during harvest season, which he called the “most fun” part of farming.

One October, at the height of the harvest, Karl suffered an aortic aneurysm and now, “It’s my turn to run the combine,” said Kurt, in a heartfelt tribute with several pauses. Karl left a wife, two sons and three grandchildren. Kurt remembered him as “a calm, strong man who always got the job done.” Now that the Karl E. Johnson is in service, said Kurt, “Karl will still be getting the job done.”

Ron Arbeiter, who partners with Johnson in the towboating side along with his brother Mark, gave the tribute to his mother, Patricia, namesake of the Patricia A.  Ron spoke of a remarkable woman who led an active life and had five children after being told by her doctor that she should consider not having children due to injuries sustained in an automobile accident. Patricia was in her chiropractor’s waiting room one day when she temporarily lost her speech. It returned after about 20 minutes, but eight months later, X-rays revealed a brain tumor.

Surgery was only partially successful, but Patricia, undaunted, travelled extensively in the years remaining to her, including to New Zealand, Australia and Hawaii, said Arbeiter. He said he remembered her telling her children, ‘“Always remember, you’re no better than anyone else.’ That brought us down a bit,” said Arbeiter. “But she added, ‘Remember that no one else is better than you,’ and that picked us right back up again.”

Caption for top photo: Southern Illinois Transfer Company christened the mvs. Karl E. Johnson and Patricia A in a June 12 ceremony on the Kaskaskia River in Evansville, Ill. (Photo by Zac Metcalf)

For more photos from the christening ceremony, click on the slideshow below: 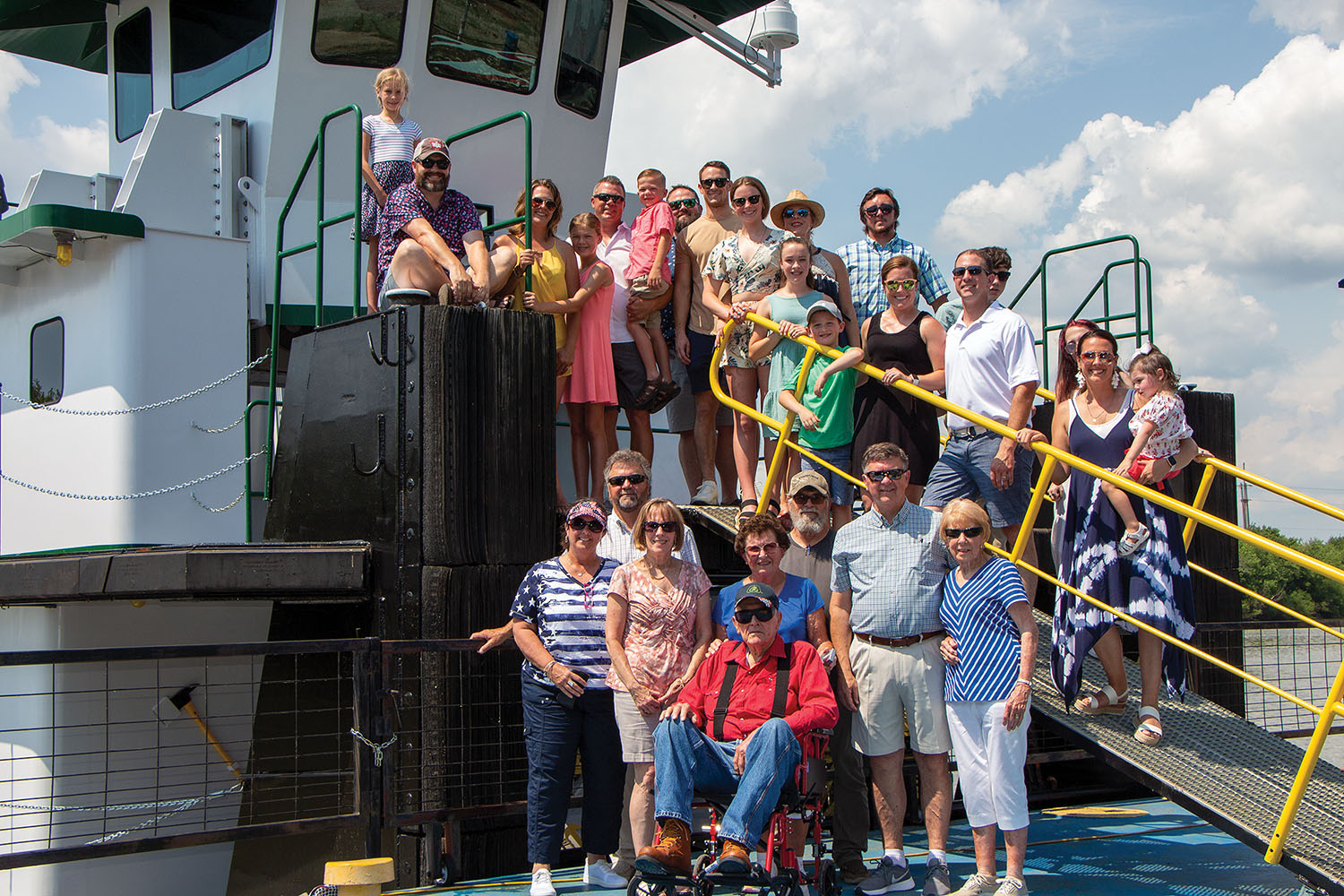 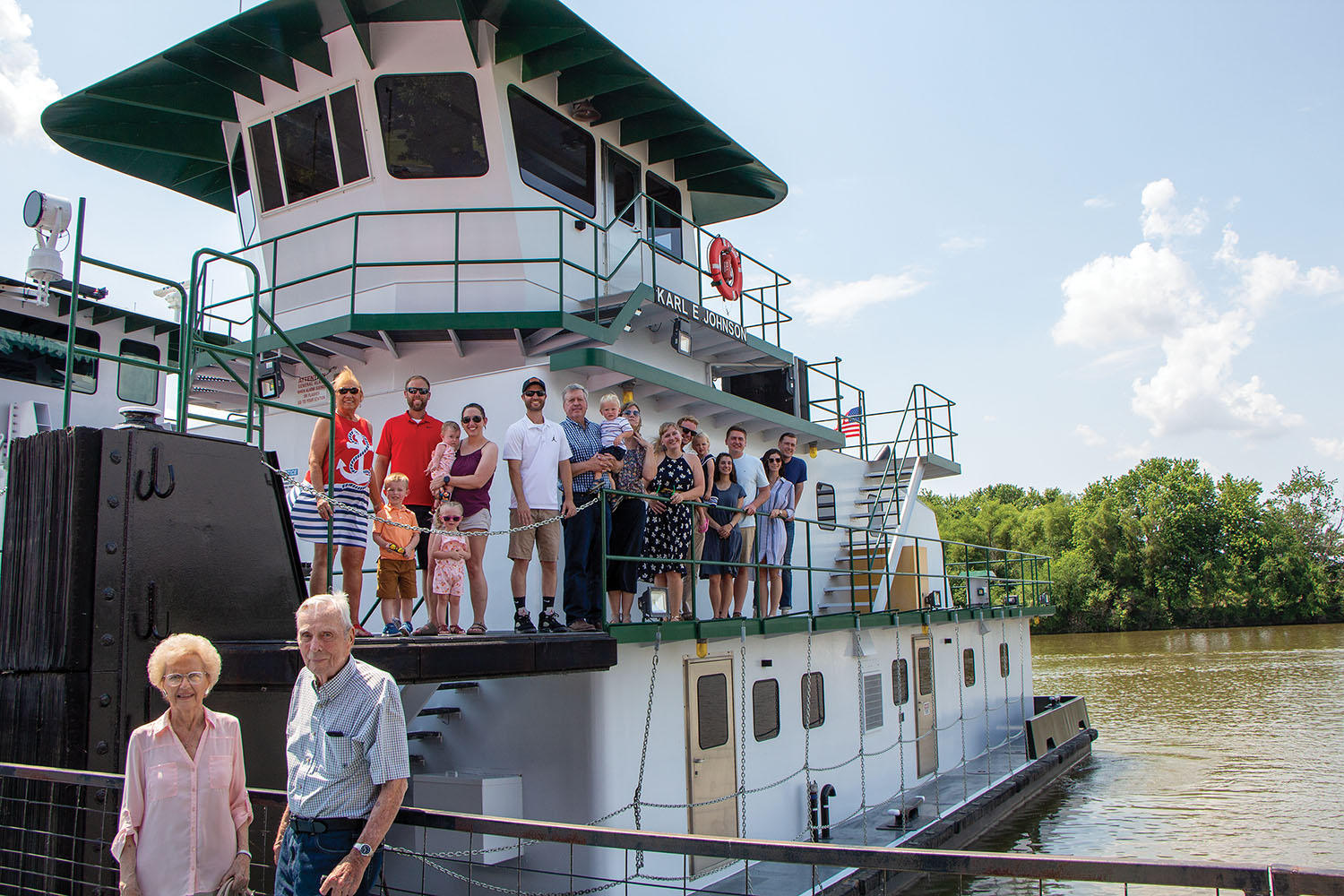 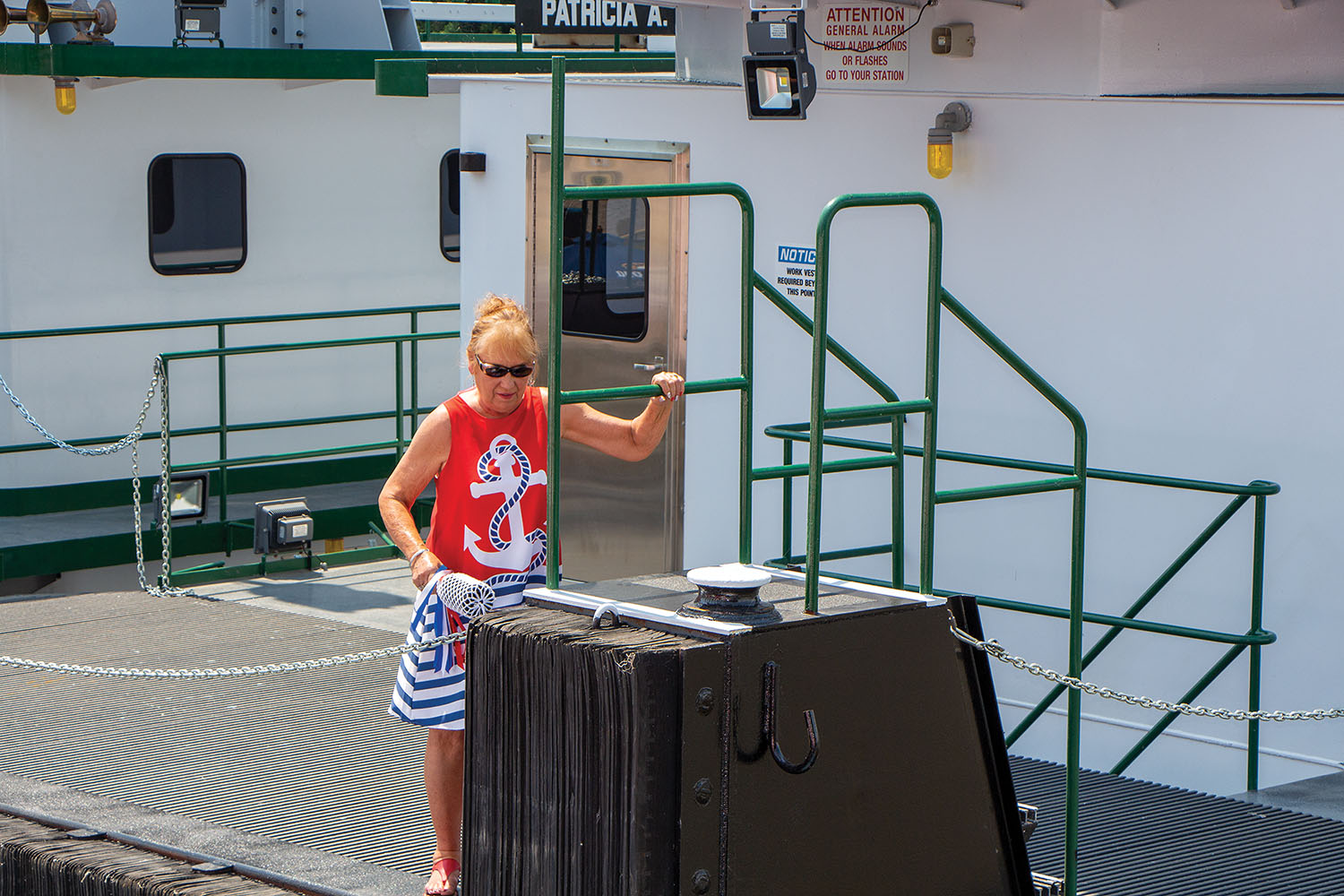 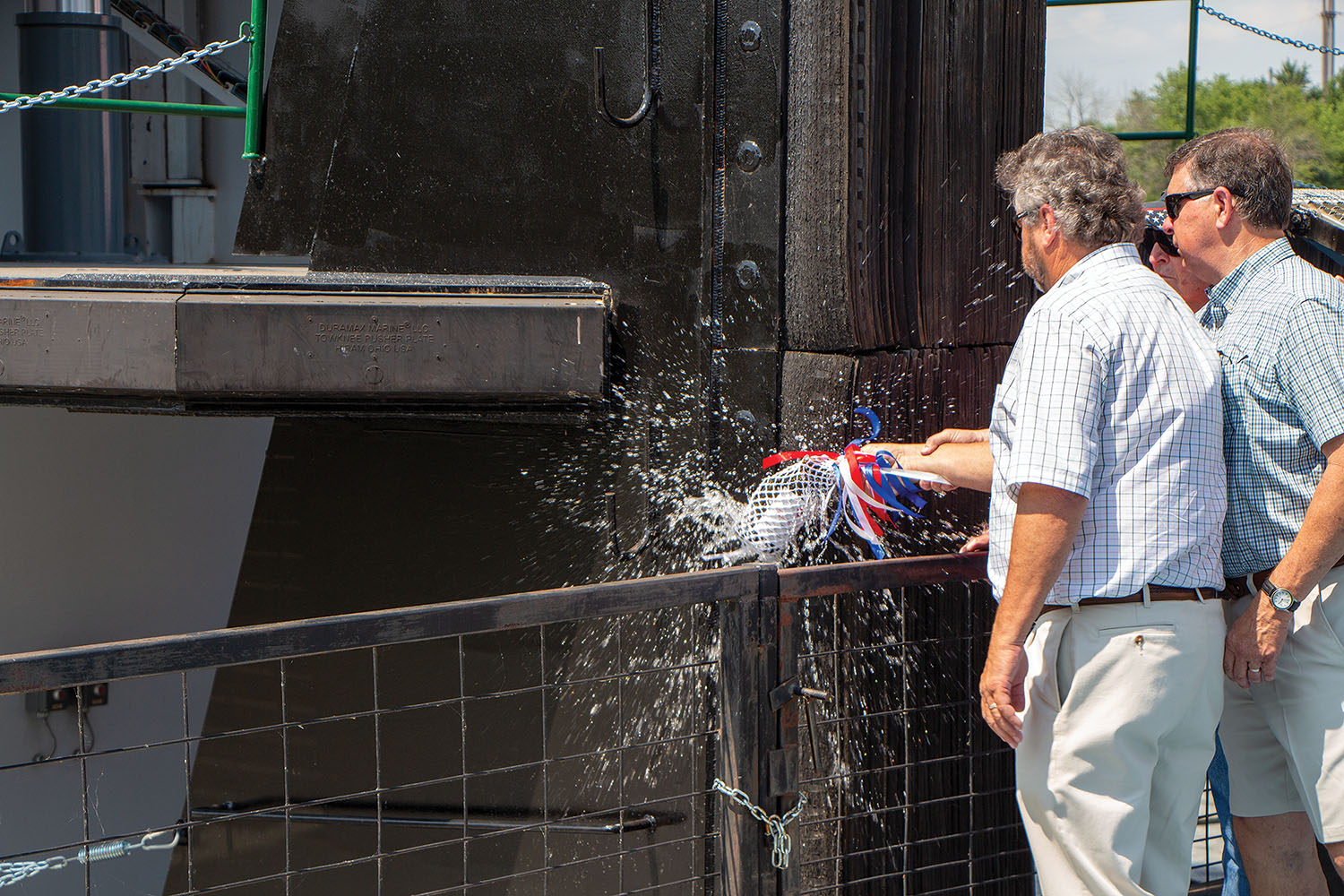 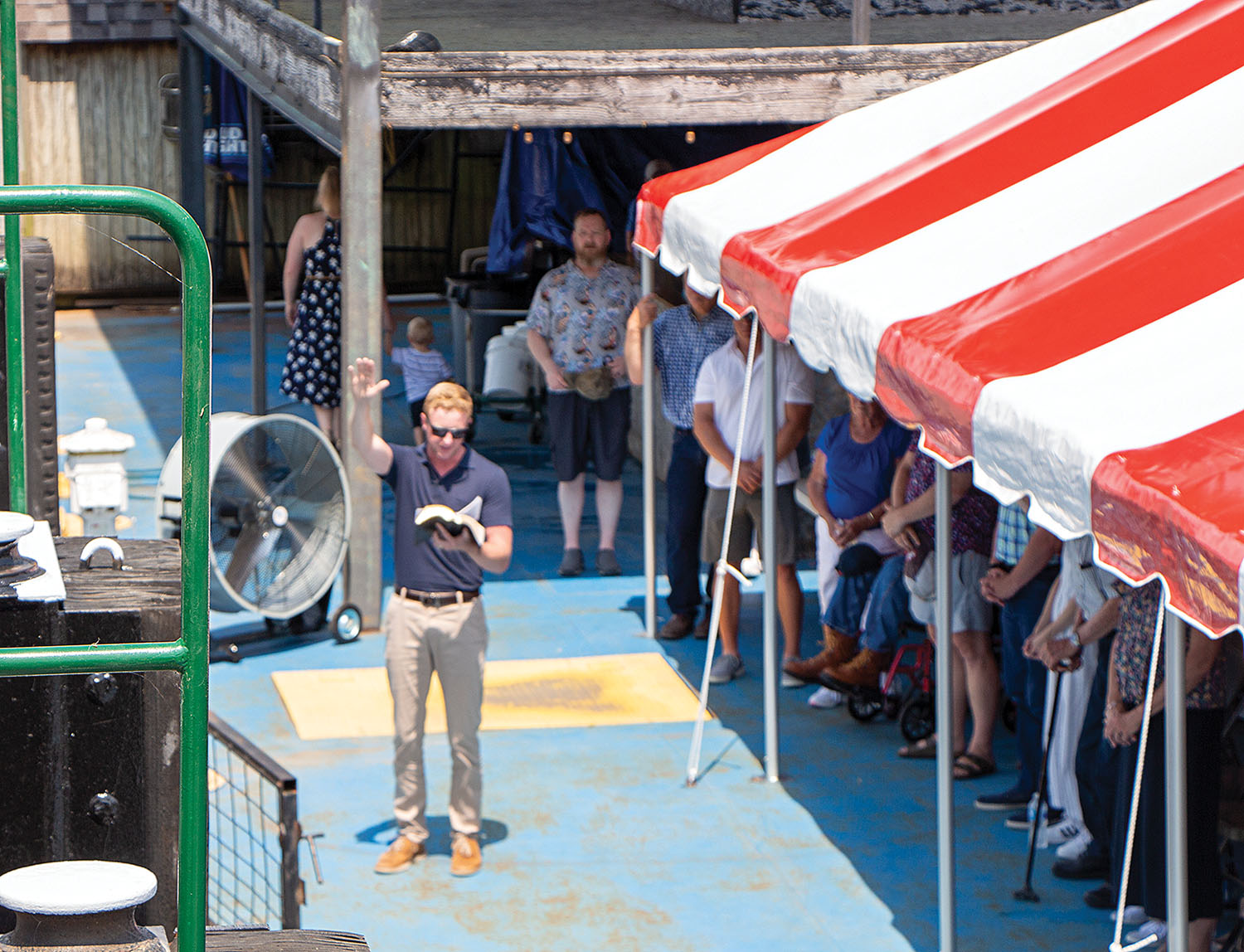 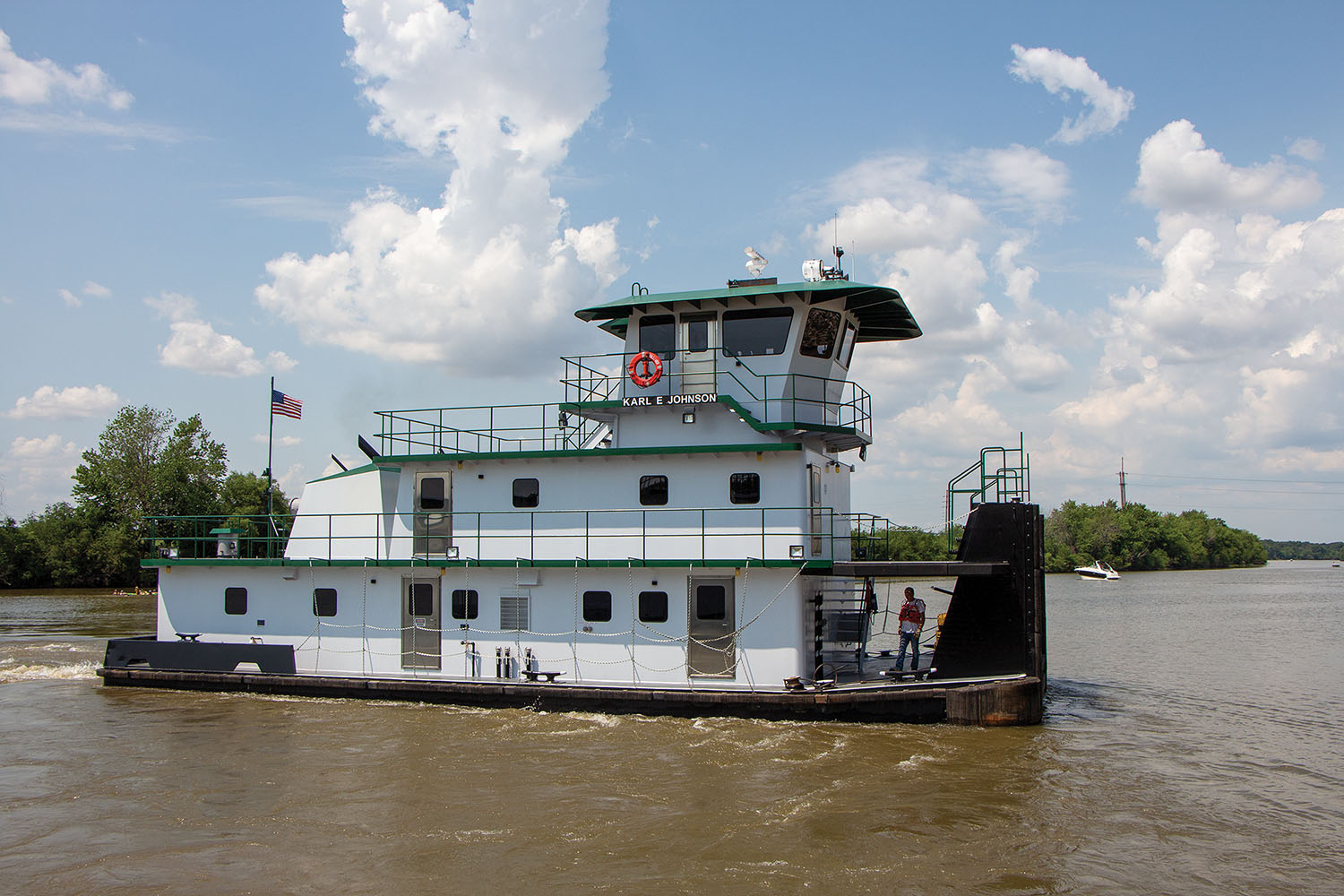 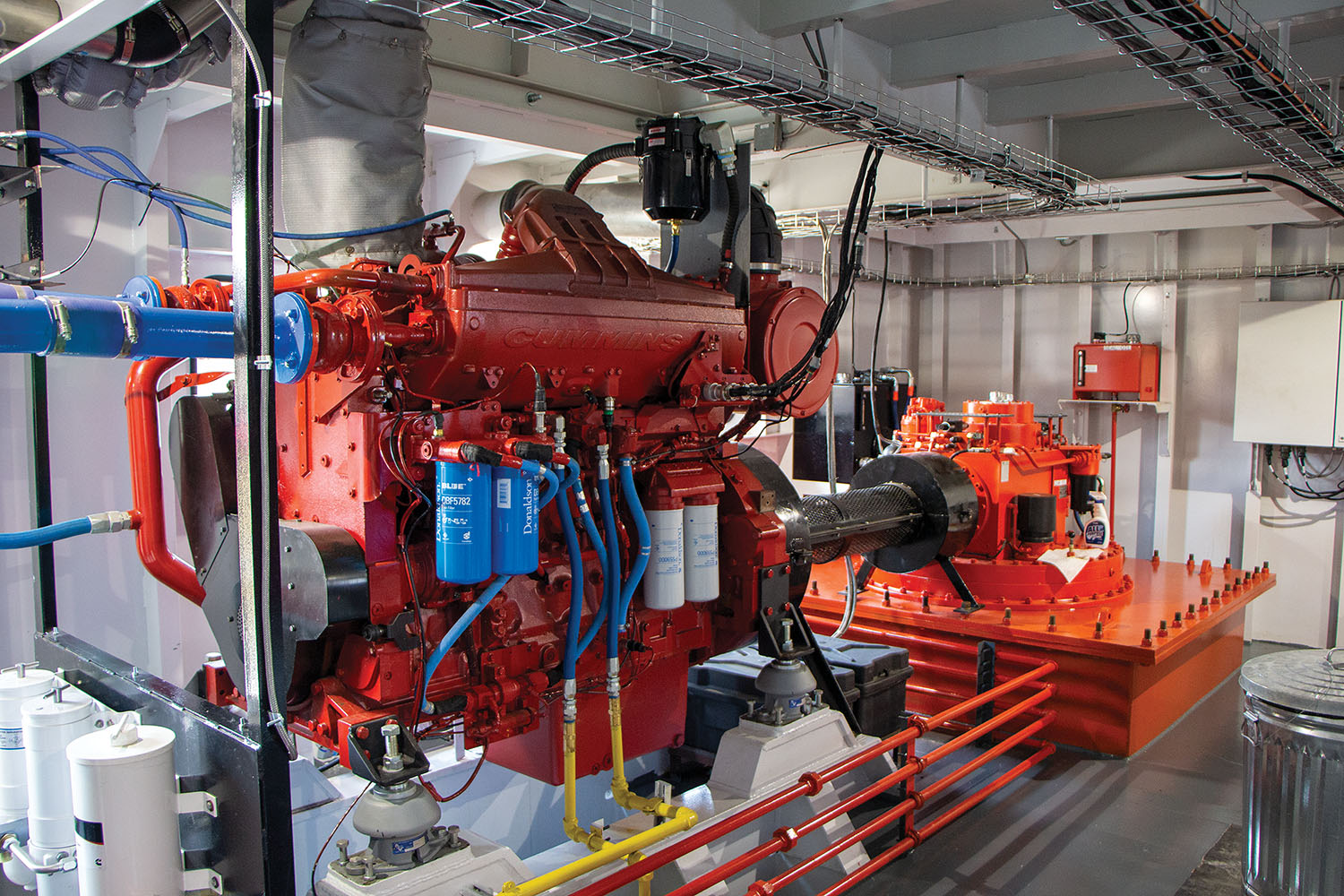 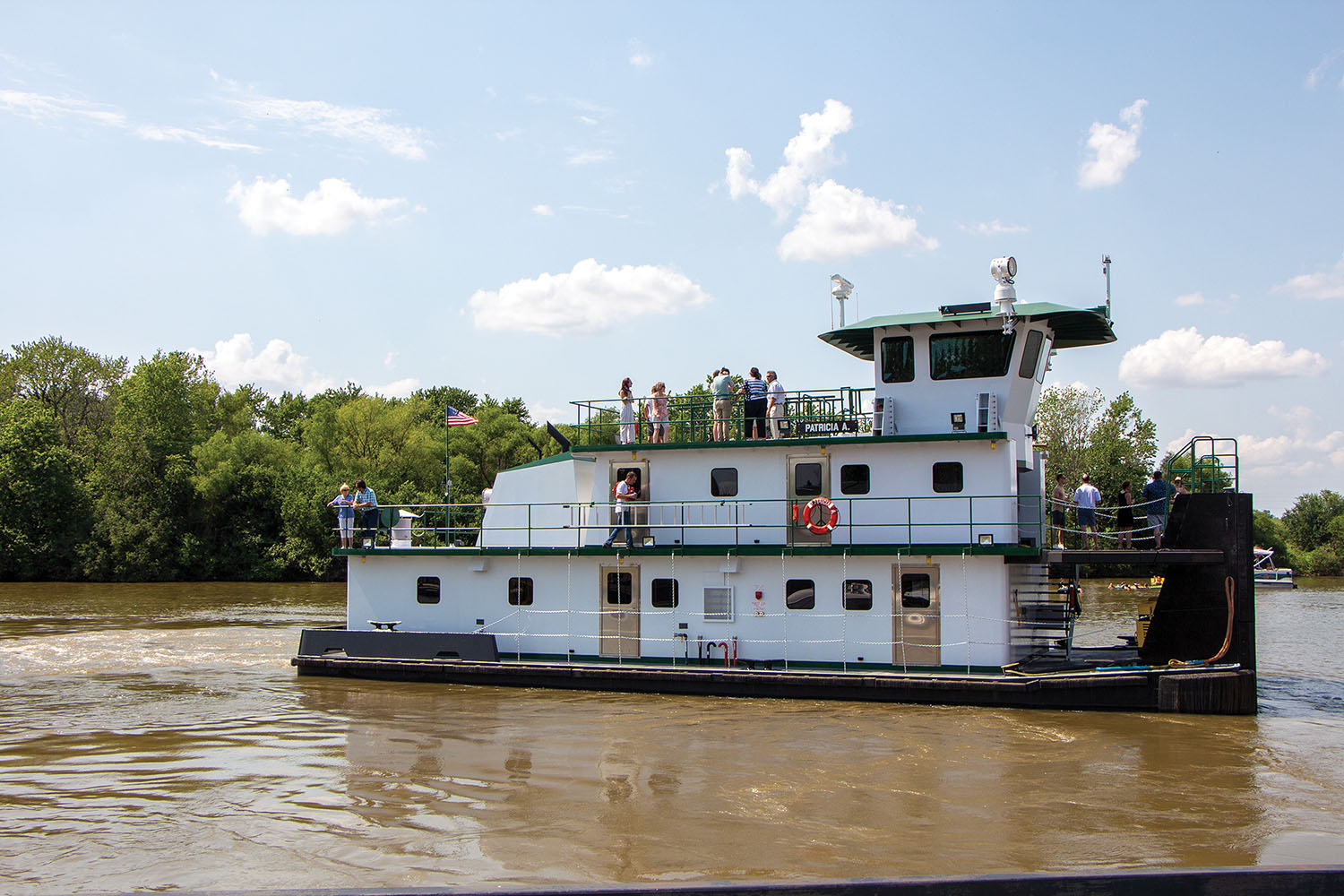 <
►
>
Mark and Ron Arbeiter and their father Willard jointly break the bottle to christen the mv. Patricia A, named after Mark’s and Ron’s mother and Willard’s wife, Patricia Arbeiter.(Photo by Zac Metcalf)