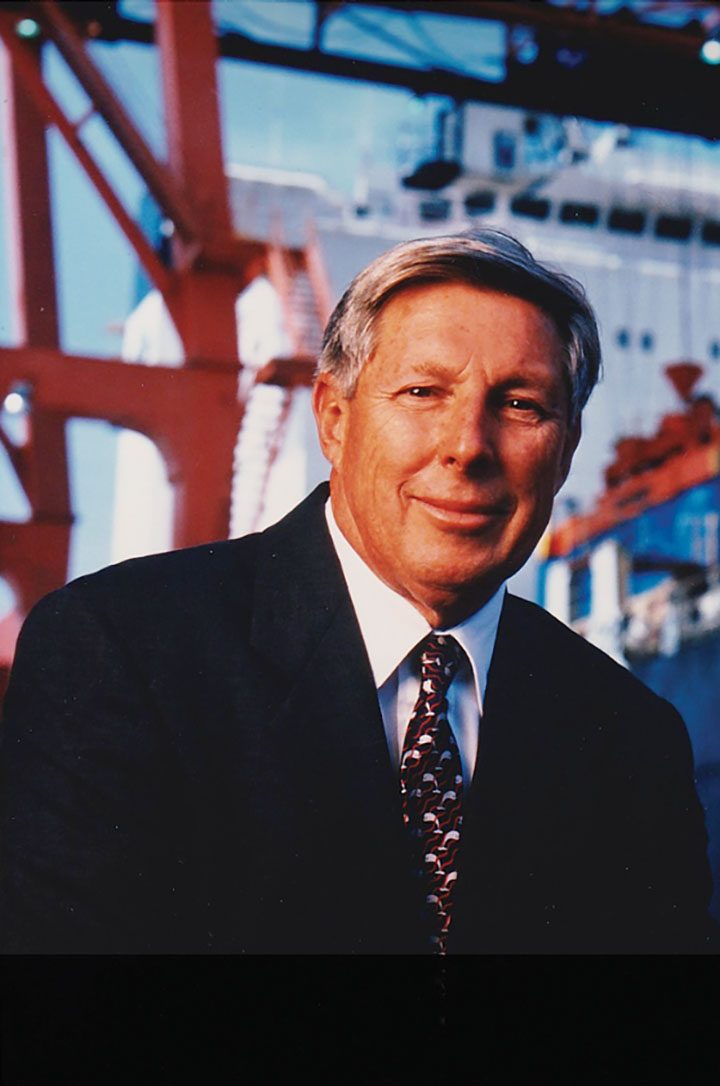 Walter James “Jimmy” Amoss Jr., former CEO of Lykes Bros. Steamship Company and founder of Seapoint, a container transfer concept envisioned for near the mouth of the Mississippi River, died March 30 at the home of his son and daughter-in-law, Dr. John and Dunbar Amoss, due to complications related to coronavirus. Amoss was 95.

A veteran of World War II, Amoss deployed early in 1945 as an ensign in the U.S. Navy aboard a rocket barrage landing craft. In April 1945, Amoss was part of the invasion of Okinawa aboard the USS Oceanus. Later that August, his flotilla was present for the official Japanese surrender.

“On the morning of September 2, I watched through binoculars the parade of high-ranking officers and diplomats on the main deck of [USS] Missouri signing the surrender documents until my eyes could take no more,” Amoss later wrote. “The war was really over this day. What next?”

What was next was marriage to his wife, Berthe Marks Amoss, in September 1946, followed by the birth of six sons, and a long career with Lykes Bros.

In 1953, after two years with Lykes, Amoss was sent to Bremen, Germany, to lead the company’s European office. He and Berthe, along with their then three sons (Jim, age 6, Bob, age 4, and Billy, 17 months) boarded the freighter William Lykes at the St. Andrew Street wharf in New Orleans on September 1, 1953. The move itself was exciting enough, but the voyage would prove to be a harrowing adventure, which Amoss wrote about some years later.

As the ship rounded the tip of Florida, it became clear that Hurricane Carol was on the same course as the William Lykes. Amoss’ account includes a disagreement between the captain and first mate aboard the vessel as to which course to take, and the captain’s decision resulted in meeting the powerful storm head-on.

By September 6, the wind, rain and waves had all the passengers aboard the ship confined to their staterooms.

“The kids seemed almost to enjoy the tossing around and I was careful to treat the shaking, rolling, plunging motion as a good romp when I was with them,” Amoss later wrote.

The ship was rolling in excess of 40 degrees at times. By September 7, the rolling and raining was causing toilets to slosh water all through the staterooms.

“Unpleasant as that was, it was the best explanation I could hope for, and I lay down again on my half soaked mattress and sang ‘Froggy Went A-Courtin’ to the boys beside me,” he wrote.

By the 9th, the crew went out to survey the damage, which included widespread destruction in “number 5 tween deck” from a locomotive that had broken loose. The ship put in at a port in the Azores for repairs. The stop in the Azores included a bad haircut for Bob’s father, which made the already-youthful-looking 28-year-old look even more boyish. By September 23—nearly three weeks removed from New Orleans—the ship landed at Hamburg, Germany.

Bob Amoss recalled how he and his brothers had no idea the gravity of the situation at the time.

“My father just made it into a game for us,” he said.

The family spent a total of 10 years in Europe before returning to New Orleans. He would go on to serve as president of Lykes for 12 years and CEO from 1986 until his retirement in 1993.

A highlight of Amoss’ career was successfully negotiating the resumption of trade between the United States and the People’s Republic of China in 1979. According to a 1980 article in American Shipper, Chinese shipping agents were concerned that Chinese ships could be seized when calling on U.S. ports. In January 1979, Amoss and Stan Barer, chief counsel to the Senate Commerce Committee, flew to Beijing to conduct in-person negotiations.

“It was a cold, clear night and close to midnight as we sped to the city,” Amoss wrote. “Our eager eyes watched the darkened rural landscape dart by with a sense of romanticized wonder. Each building, forest and lonely person enchanted us by the aura of our long fantasy of this place.”

Four days later, talks reached a critical point when Li Chih-Jan, the shipping manager of COSCO, asked Amoss, “Mr. Amoss, if we send a COSCO ship to your country and somebody seizes that ship, what will you do to help us?”

Not wavering in the least, Amoss replied, “Mr. Li, if that happens, Mr. Barer will immediately go into the court with representatives of our Justice Department to smash that action. And to the extent that your ship is delayed in our ports by that action, Lykes will accept a similar delay of one of its vessels in Chinese ports.”

“Inwardly, I gulped,” Amoss later wrote. “I had said it, and if it came to that, I must do it—the stakes were that high.”

That confident response proved the difference-maker. On March 15, 1979, the Letitia Lykes sailed into Shanghai harbor, and a Chinese-flagged vessel called at Seattle just over a month later.

Now more than 40 years later, the impacts of waterborne trade between the United States and China cannot be overstated.

Later in life, Amoss spearheaded an effort to create a direct ship-to-barge container transfer terminal near the mouth of the Mississippi River in Venice. Seapoint, first proposed in the early 2000s, failed to garner support from local ports.

Amoss and Berthe, an accomplished writer and teacher of children’s literature, were married 73 years. She passed away October 6, 2019, at the age of 94. Amoss is survived by a sister, Malee Hearin (Zett) off Gainesville, Ga., and all six sons. Jim (Nancy) of New Orleans is a former editor of the Times-Picayune, which won four Pulitzer Prizes under his leadership; Bob (Lisa) of New Orleans leads Amoss Trading Services, a manufacturing and logistics company; Billy (Kate) of Washington D.C. is the executive director of  Vishnevskaya-Rostropovich Foundation, which benefits children’s health care in Russia and other countries of the former Soviet Union; Mark (Liz) of New Orleans is a former officer of Amoss Trading Services; Tom (Colleen) of New Orleans and Louisville is a champion thoroughbred horse trainer; and Jonh (Dunbar) of New Orleans is a medical doctor.

Internment will be at Metairie Cemetery at a later date.

More Coronavirus-related stories in the WJ:

COVID-19 Response: How Ergon Marine Is Protecting Its Team And Customers

Best Practices And Liability In Time Of COVID-19

WJ Editorial: Barge Industry Is Used To Rising To Challenges

Publishers Note: This Too Shall Pass, Right?

Coping With Coronavirus In The Marine Industry