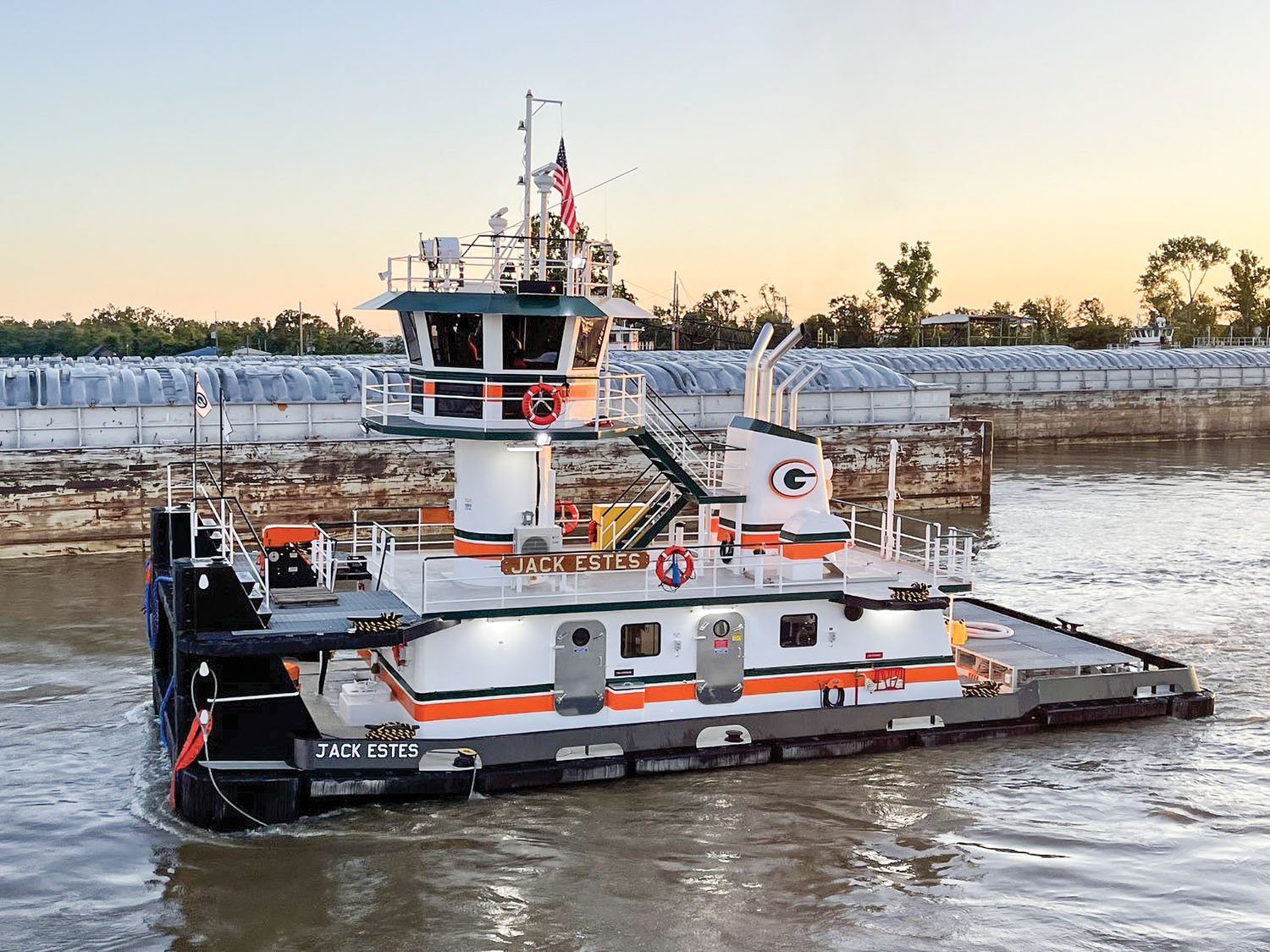 Destrehan, La.-based Gnots Reserve Inc. has added a new boat to its fleet following the May 13 delivery of the mv. Jack Estes. Eymard Marine Construction & Repair of Harvey, La., built the Jack Estes, which features an octagonal pilothouse atop a spindle rather than a middle deck.

Besides offering wheelmen a 360-degree, unobstructed view, the pilothouse, in eliminating the need for a second deck, gives the Jack Estes excellent maneuverability, both with a tow and light boat. The reduced weight makes the vessel quicker and more efficient, said Ryan Hayes, port engineer for Gnots Reserve, who oversaw construction of the vessel.

“This particular design, what we like most about it is the low center of gravity,” Hayes said. “It provides us quicker shifts in and around the fleet, especially in high river.”

Wise said he’s impressed with what the Jack Estes is capable of.

“The Jack is actually a foot wider than our similar fleet boats that are 26 feet wide,” Wise said. “The Jack is 27 feet wide. I was talking with our port captain the other day, and he said you can run hooked up and turn it hard over, and there’s no fear of it listing too much. You can’t do that with every boat. The Jack is real stable.

“The less weight up high, the more stable it is,” Wise explained, “and the width of the boat helps with that also.”

Wise said the hull design on the mv. Jack Estes also makes it work well in the fleet.

“The way we designed the hull, we raised the bow a little bit,” Wise said. “A lot of push boats, when you hook them up light boat, the bow will go under at some point, because it pushes water over the deck, and you have to slow it up a little bit. This boat runs well light boat. It maneuvers real well. You can turn it on a dime.

“In a fleet, that’s way more important than a boat going up and down the river with a tow,” he added. “We’re turning all day long in the fleet.”

The engines are cooled by Duraweld keel coolers from East Park Radiator. The steering and flanking rudders are controlled by an electric-over-hydraulic, full follow-up system manufactured by Hydra Force. Unlimited Control & Supply provided the vessel’s alarm system.  The Jack Estes has tankage for 18,900 gallons of fuel and 6,370 gallons of potable water.

Wheelhouse Electronics provided the vessel’s electronics package, including two Furuno radars. Two 19-inch Carlisle & Finch search lights adorn the top of the pilothouse. On deck, the Jack Estes is equipped with three 40-ton Wintech winches, two on the main deck and one centered on the fleet deck for handling empties. Wintech supplied the vessel’s roller buttons, while Donovan Marine provided the kevels. Fendering is by Schuyler.

The mv. Jack Estes will operate around Gnots Reserve’s Mile 118 fleet, servicing the grain elevators on the Lower Mississippi River.

The mv. Jack Estes is named for Wise’s father-in-law, who was part of the team that founded Gnots Reserve.

“The Gnots corporation was actually formed by five guys to have a boat to take pilots on and off ships, but that never did materialize,” Wise said. “That’s where the name ‘Gnots’ comes from, ‘Greater New Orleans Transportation Service.’”

Prior to establishing Gnots Reserve, Estes was instrumental in starting the first public fleet in New Orleans in the late 1950s, Wise said. Before that, Estes worked on a tug that was one of the first to tow a barge of oil from a well in East Bay (in the Mississippi River delta between South and Southwest passes) to Norco, La.

Wise married Estes’ daughter, Darlene, in 1966 and went to work for Gnots Reserve in 1970.

“He taught me a whole lot about fleeting, towing and business in general,” Wise said. “Jack was a person that never met a stranger. He could talk to the president, the pope or a deckhand. It was all the same. He was a great guy.”

And while the mv. Jack Estes will honor Wise’s father-in-law for years to come, his family’s ongoing role in the company pays an even greater tribute to Estes. Wise’s son, Dane Wise, and his daughter, Danielle Hymel, serve as vice presidents of the company, with his son managing operations and his daughter managing the office. Wise’s grandson (and Estes’ great-grandson), Taylor Hymel, also works at Gnots Reserve.